Sur looks good from far. Even midway, it seems 'so far so good'. But towards the end when the fizz fizzles out, you realize that it's just far from good. Except for the sinfully catchy music, nothing catches your attention.

On the face of it, Sur has everything going for it. A brand new storyline of a mentor turned tormentor, a fresh cast - singer Lucky Ali and TV actress Gauri Karnik making their debut - being the comeback movie of acclaimed director Tanuja Chandra, and music director M M Kreem. But they simply fail to fall in place. Blame it on mediocre direction and a saggy screenplay.

Vikramaditya Singh (Lucky Ali) is a pop singer who is not as bad as Anu Malik. But going by the numbers he sings, he does not seem too talented either, though you are made to believe otherwise. He runs a music school in Ooty and is in search of a genius who shares his passion for music and can possibly take over his musical legacy after him.

He finds his match in Tina (Gauri Karnik), a gifted singer in Goa. He convinces her to join his school, and Tina too is thrilled to bits that she is the chosen one of none other than her singing idol Vikram. Thus begins the saga of the molding Tina into a star.

Barely a few compositions later, the not-so-talented Vikram realizes Tina is leagues ahead of him and that she may soon surpass him. His worst nightmares come true when the music company he signed for does a turnaround to sign up Tina

Now, the insecure Vikram hits the roof and starts harassing her, debunking her compositions, calling her names and, in general, making her feel miserable. He gets so upset with her talent that he even plagiarizes her tune - the brilliant Aaa Bhi Jaa number - passing it off as his own.

How Tina grapples with her green-eyed mentor, and how Vikram finally overcomes his insecurities to give Tina her share of success is what the film is all about.

What music does to Sur, the screenplay and direction undo. There is a gamut of emotions for Vikram here as a paternal figure turning into a bete noire, but director Tanuja Chandra fails to portray that as a smooth transition. One moment the neurotic Vikram is playing godfather to the girl, and just when she composes a great tune, starts harassing her so she stops composing such fare. Then, of course, the totally unwarranted bit about Tina running away from the school to turn into a nun, unnecessary melodrama during the climax, a fantasy number where the wannabe nun dresses up in a spaghetti evening gown... It looks like these were added as afterthoughts. 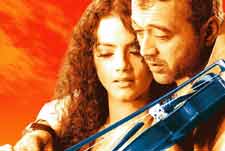 The light-eyed Lucky, with his understated presence and soulful eyes, fits the role of a neurotic singer to the T. Gauri, however, looks listless throughout. She is portrayed as girl with steely grit, but then she hardly displays any intensity or passion anywhere.

ADVERTISEMENT
This page was tagged for
sur muvi ki khani in hindi
Sur Movie full story in Hindi
Sur hindi movie
Sur reviews
release date
Follow @fullhyderabad
Follow fullhyd.com on
About Hyderabad
The Hyderabad Community
Improve fullhyd.com
More
Our Other Local Guides
Our other sites
© Copyright 1999-2009 LRR Technologies (Hyderabad), Pvt Ltd. All rights reserved. fullhyd, fullhyderabad, Welcome To The Neighbourhood are trademarks of LRR Technologies (Hyderabad) Pvt Ltd. The textual, graphic, audio and audiovisual material in this site is protected by copyright law. You may not copy, distribute, or use this material except as necessary for your personal, non-commercial use. Any trademarks are the properties of their respective owners. More on Hyderabad, India. Jobs in Hyderabad.