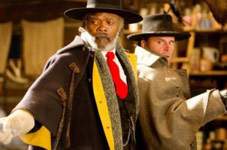 Josh / fullhyd.com
EDITOR RATING
7.0
Performances
Script
Music/Soundtrack
Visuals
9.0
8.0
9.0
9.0
Suggestions
Can watch again
Yes
Good for kids
No
Good for dates
No
Wait to rent it
No
You probably got the news already, about the mixed reactions to The Hateful Eight. There are people raving about it, there are people denouncing it, and there are people who slept through it. To make sense of this spectrum of reactions, in this review we will advance a hypothesis on just what the matter is with The Hateful Eight.

Of course, the premise first. Years after the Civil War, somewhere in Wyoming, a blight-like blizzard maroons eight oddballs in a small joint called Minnie's Haberdashery. Each of them has their own story and reasons to be at Minnie's at that unfortunate time, and it looks like the blizzard will cause them to spend a couple of days at least in each other's company. If any of them did not appreciate the company, they could leave, sure (it's a free country and all that). Except, they'll promptly freeze to death within minutes of setting foot outside Minnie's.

Among these eight is John Ruth aka The Hangman (Kurt Russell), a bounty hunter. And the bounty he has in hand is Daisy Domergoue (Jennifer Jason Leigh) with a fat prize of $10,000 on her head. Like any businessman, Ruth has every intention of protecting his asset, and he is very certain that one of those men is not what he claims to be and that that man is just waiting to kill Ruth and snatch Daisy away. He just doesn't know which one.

Coming to our hypothesis - Tarantino mentioned that Inglourious Basterds took fourteen years to write. It isn't really a perfect film. It isn't even a perfect script. But it demonstrates a certain genius in writing, better than anything Tarantino wrote before. Long conversations and non-sequitur were always Tarantino's thing, but Basterds was a proficiency exercise. Hans Landa's subtle but steadily established dominance in the first scene, or the chilling tavern scene, or when Shosanna meets Landa again and not one darned soul can tell if he recognises her.

All of those scenes seemed to meander like river courses but they had a natural flow of direction, quite like a river. You'd think an original achievement of this kind would deserve every felicitation. Perhaps Tarantino thought so, too. That is until they handed the best screenplay Oscar to Hurt Locker.

What followed was an almost conscious effort of playing to the gallery - Django Unchained, with its black slave seeking revenge over his white tormentors with the help of a white bounty hunter (Waltz's Oscar was almost unearned, he just had to be in the role to win it) and its dripping oodles of sass played straight to the gallery (or the Academy, if you will). And what do you know. Five nominations and two wins.

Seen along these lines, The Hateful Eight marks a return to the sensibility Tarantino was driving to before Django. It's like he took a detour to show that he can win them awards and mainstream recognition but what he really wants to do is hone those writing skills further. The script is practically meditative. It takes its time (runtime around three hours), plays around, but finds fruition towards the end. Not in a crowd-pleasing way, either - it's more like the script signs off feeling smug and happy with itself. You aren't invited to the party, but you can hang around if you like.

People are going to find it dull precisely because of that. And further, Tarantino seems less keen on being a filmmaker and more on being a writer. The Hateful Eight is well put together (and the man is so skilled he can't make a bad film if he wanted to) with some beautiful visuals (shot in Ultra Panavision 70) and glorious original score by Ennio Morricone (may his clan prosper). However, it all feels like an aside. The movie was primarily meant to be a script, and maybe a play. And quite like a play needs, the performances, too, are superb (Jennifer Jason Leigh and Walton Goggins give stellar renditions).

It doesn't try to entertain. Not for a long while, at least. Therefore, much of the mainstream audience is out. The more vocal ones will dismiss it as a proper film. Further, it doesn't emphasise on the viscerality that Tarantino is known for - there is violence, of course, but it isn't the point of the film. But that's possibly because the so-called 'gratuitous' violence just met with some 'gratuitous' chopping at the censor board. That accounts for the sleeping members in the audience. For a lot of people, it would be quite unfathomable on why the film even got made.

As for the ones who are denouncing the film, that's just a bunch of people who are offended that the N-word is used a lot in the film. Sure, as soon as they figure out a way to go back to the 1800s and erase those prejudices, we can comment on how insensitive a movie in 2016 is.

The movie itself however, plays slowly, meditatively, doing its bit for the script that breathes under it. The characters slowly establish themselves, their interactions forming the flesh of the film (quite like the classic Twelve Angry Men). Genius and audacity start trickling in steadily - not trying to overwhelm, just trying to master subtlety. And the point is not whether Tarantino succeeds at it all. The point is he's chosen to attempt it, and he's going to attempt regardless of what we think of it.

And if you have the patience for that sort of thing, if you can sit by and watch an artist nurture his art and let it nurture him in return, you can give this one a shot. Just remember, if at any point you feel like you are not a part of this whole thing, maybe you weren't meant to be.
Share. Save. Connect.
Tweet
THE HATEFUL EIGHT SNAPSHOT 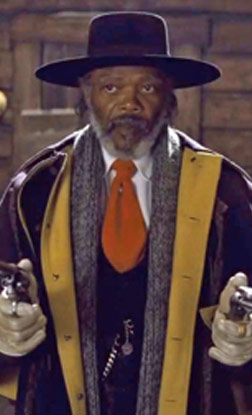 ADVERTISEMENT
This page was tagged for
The Hateful Eight english movie
The Hateful Eight reviews
release date
Samuel L. Jackson, Kurt Russell
theatres list
Follow @fullhyderabad
Follow fullhyd.com on
About Hyderabad
The Hyderabad Community
Improve fullhyd.com
More
Our Other Local Guides
Our other sites
© Copyright 1999-2009 LRR Technologies (Hyderabad), Pvt Ltd. All rights reserved. fullhyd, fullhyderabad, Welcome To The Neighbourhood are trademarks of LRR Technologies (Hyderabad) Pvt Ltd. The textual, graphic, audio and audiovisual material in this site is protected by copyright law. You may not copy, distribute, or use this material except as necessary for your personal, non-commercial use. Any trademarks are the properties of their respective owners. More on Hyderabad, India. Jobs in Hyderabad.