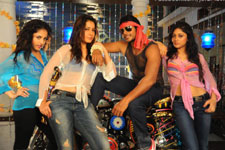 Ravi Kandala / fullhyd.com
EDITOR RATING
2.0
Performances
Script
Music/Soundtrack
Visuals
4.0
2.0
2.0
4.0
Suggestions
Can watch again
No
Good for kids
No
Good for dates
No
Wait for OTT
No
The phrase Catch-22 applies perfectly to Telugu movie-goers. They are fed-up of big budget flicks that are routinely churning out the same masala stuff boring them to death. When they turn to the small budget flicks, but for a few like Karthikeya, they get the same old horror flicks that fail to scare them, and comedy flicks that fail to evoke even the polite chuckle. In the end, what they watch are endless re-runs of recent / old hits on TV.

Joru is an example of all that is wrong with the Telugu film industry, and then some. Extra routine scripts and the assumption that the audience will lap up anything when padded with comedy (read Brahmanandam) and some glamour (three heroines) rule the roost in the flick, and like in numerous other films, the 140-minute runtime seems more like 180.

Joru is the story of Sandeep (Sundeep Kishan), a typical Telugu film hero loved by his parents. And here's the twist - he has two sets of parents, since he is born to one set and brought up by the other. After a very filmy argument at home, he sets out to Hyderabad in his car, and meets Anu (Rashi Khanna) on his way. Anu is attacked midway by Bhavani (Ajay), and is obviously saved by Sandeep.

He then comes to know that Anu is the daughter of the MLA of Waltair, Sadasivam (Sayaji Shinde). The reason Anu is attacked, a love story between Anu and Sandeep, and other love stories between Sandeep and a couple of other heroines who are there purely to show some skin in a few songs, make up the remaining runtime of the movie.

Joru's script is a mishmash of every film released all over India in the last four decades - basically, a very confusing one. The director tries to throw in every trick of the trade to get himself a commercial hit, and ends up making a royal mess. About half of the movie's first half consists of comedian Saptagiri trying to teach music to a bear in a forest. When the bear does not learn, he beats it up, and the bear returns with its parents who beat him senseless. This episode, as absurd as it sounds, is stretched for nearly 20 minutes.

There is a small twist near the interval, but director Kumar Nagendra decides to fall back on Brahmanandam in the second half. This move backfires, with Brahmanandam not getting even a single funny line.

The acting is all one-note. Sundeep Kishan has developed some standard expressions, and makes do with those. Rashi Khanna and the other heroines - Priya Bannerjee and Sushma - play the dumb belles head over heels in love with the hero. There is a huge supporting cast, and all of them pull out their best stock expressions and sleepwalk through the film.

A couple of the songs are tolerable, but the others cross over into the noise territory, and are not greatly picturised either. They even have lyrics like "Facebook Kodi" and "Google Guddu". The technical values are decent.

Joru is a complete waste of a good two-and-a-half hours. Like SRK says in Chak De, no one can give you those 140 minutes back - so don't waste them here.
Share. Save. Connect.
Tweet
JORU (TELUGU) SNAPSHOT 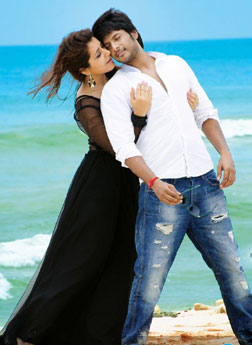 ADVERTISEMENT
This page was tagged for
MoviesRulz. Come joru
moviesRulz. Com joru
Movie rule in joru
joru movie rulz telugu
joru Telugu Full movie
Follow @fullhyderabad
Follow fullhyd.com on
About Hyderabad
The Hyderabad Community
Improve fullhyd.com
More
Our Other Local Guides
Our other sites
© Copyright 1999-2009 LRR Technologies (Hyderabad), Pvt Ltd. All rights reserved. fullhyd, fullhyderabad, Welcome To The Neighbourhood are trademarks of LRR Technologies (Hyderabad) Pvt Ltd. The textual, graphic, audio and audiovisual material in this site is protected by copyright law. You may not copy, distribute, or use this material except as necessary for your personal, non-commercial use. Any trademarks are the properties of their respective owners. More on Hyderabad, India. Jobs in Hyderabad.