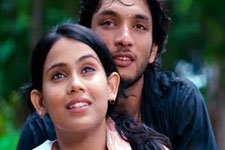 Kadali, the dubbed version of Mani Ratnam's Tamil Kadal, is essentially a Rajiv Menon - A R Rahman film. Rajiv Menon's stunning cinematography and Rahman's artistic harmony set the stage for Mani Ratnam to execute his deftness at handling human emotion, but the man seems to have lost heart midway.

Telugus be warned, Kadali was made for a Tamil audience, so there are elements in it that don't go down well with movie-goers here. Plus, Mani Ratnam had stated that the film's essence is the dialect spoken by its cast. This aspect of the film assumes even more importance than usual since the story is highly specific about both its location and its characters' collective local identity.

Kadali takes us to a tiny fishing village on the south-Indian coast, where nosy, garrulous, foul-mouthed fisher-folk live hand-to-mouth existences. They're Christians minus the religion. The local church is in a state of depressing neglect, and serves as merely a meeting spot for stray dogs. Father Sam (Arvind Swamy - a picture of tranquillity) arrives in the village, much to the curiosity of the villagers, and attempts to rekindle their faith with his unobtrusive yet momentous presence.

But everybody doesn't love Sam. Sam has an enemy from his seminary days, in the form of Birchmans (Arjun), a man well-versed in the Bible but who revels in his debauchery.

Expressing the unspoken, exploring intimacies in otherwise non-intimate relationships - these are what keep you engrossed in Kadali for a rather long time. Father Sam's bond with the villagers has a nicely defined arc, and is well-handled. Arvind Swamy is a man wonderfully suited to his role, that of a composed priest who renounced wealth to tread the path of God. It is the kind of role that instantly makes you root for the man without him saying much.

The music and the visuals contribute a lot to the film, in terms of tone, content and quality. The lines are decently written, too. There are quite a few emotional moments well-written and well-captured, that don't need too many words.

The film holds itself together very well until the interval. The unravelling starts when Thomas starts shifting sensibilities and priorities - he seems to do it literally in half a conversation, and you don't know what justifies it. If it is because he's still a callow young man, well, it wasn't very clear.

And what is Kadali really about? If the film is about the triumph of faith over evil, then the redemption it shows is not fitting enough. The victory it talks about is not worth the emotion you spent rooting for the nice guy. And what was that climax fight all about?

If the film is about love in the face of all odds, then the much-hyped love isn't the most beautiful romance you've seen on screen. In fact, it is a hugely flawed romance, because it is effectively one-sided.

Towards the end, there are too many unpleasant issues being dealt with, and you stop caring about the characters because, frankly, you don't care.

All the characters seem to have some meaning and depth, except for the sleazy Birchmans, whose immorality seems to have neither bounds nor proper justification. He refers to himself as Satan, and enjoys being evil - but it's weird to have someone so dark in a story that has so many real people, the greys.

Arvind Swamy and Arjun are the best of the lot. Arjun's potential is wasted in a role that has no dimensions to it. Gautham Karthick has been styled very well for the role - or does he really have a long way to go before he can grow a moustache? He's visibly earnest, and expressive, too.

The plain-looking Thulasi Nair is Asin-like in her expressions. Her exceptionally unexceptional looks might have made Kadali's romance angle more real, but for the fact that there's not much of a story in the love story.

Lakshmi Manchu is around for exactly three scenes. The rest of the actors are good.

The film has been made with as much attention to detail as you would expect from a Mani Ratnam feature - from churches to rustic seaside watering holes to cramped fishermen's homes, it's all been captured with visible thought. However, the fight scene aboard the boat is badly done. Also, there are several over-the-top moments that are typical of Tamil films - what we would politely refer to as the "Tamil flavour".

A Mani Ratnam fan would watch Kadali, and for good reason. However, this is not the best from the man.
Share. Save. Connect.
Tweet
KADALI SNAPSHOT 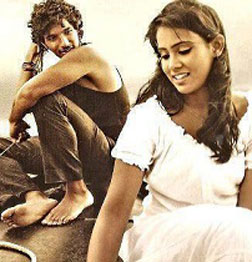 ADVERTISEMENT
This page was tagged for
???? ????
Kadali telugu movie
Kadali reviews
release date
Gautham Karthik, Thulasi Nair
Follow @fullhyderabad
Follow fullhyd.com on
About Hyderabad
The Hyderabad Community
Improve fullhyd.com
More
Our Other Local Guides
Our other sites
© Copyright 1999-2009 LRR Technologies (Hyderabad), Pvt Ltd. All rights reserved. fullhyd, fullhyderabad, Welcome To The Neighbourhood are trademarks of LRR Technologies (Hyderabad) Pvt Ltd. The textual, graphic, audio and audiovisual material in this site is protected by copyright law. You may not copy, distribute, or use this material except as necessary for your personal, non-commercial use. Any trademarks are the properties of their respective owners. More on Hyderabad, India. Jobs in Hyderabad.