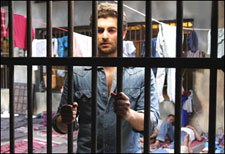 Priyanka Pulla / fullhyd.com
EDITOR RATING
1.0
Performances
Script
Music/Soundtrack
Visuals
2.0
1.0
2.0
3.0
Suggestions
Can watch again
No
Good for kids
No
Good for dates
No
Wait for OTT
No
When a prison inmate in Madhur Bhandarkar's Jail describes what solitary confinement does to you - "Saala, aadmi andar se khaali ho jaata hai" - you realise that's exactly how you are feeling after an hour of watching this drab, unidimensional, hamming take on the unfairness of the Indian criminal-justice system. Jail is one hell of a life-wearying ordeal. By the interval, I was feeling like Neil Nitin Mukesh in the film - unfairly incarcerated in a neverending trial, and Belabored Belabored Belabored. Tragically Tragically Tragically. Yeah Bhandarkar - We get the point! Will you wrap it up already?

Jail is the scmaltzy saga of Parag Dikshit (Neil Nitin Mukesh) who is wrongly tried and convicted for possessing large quantities of superfine cocaine and heroin. It is not his handiwork of course, but his roomate Keshav's. He deals in drugs while bonny- baby Parag who really was born just yesterday never gets a whiff of it and gets badly entangled in the case. Meanwhile Keshav, who is conveniently comatose following a police encounter, cannot provide witness. You might argue that paragons of innocence like Parag really ought to be implicated if they cannot smell a rat even when its poking its tail halfway up their seraphic nostrils. The police and jury think exactly that and lock him away in an overcrowded jail stuffed with wriggling bodies of motley criminals.

Neil Nitin Mukesh preserves a botoxed lack of expression throughout his ordeal - rather like a Pygmalion sculpture struggling to come to life. Periodically, like someone anaesthesized for a tooth extraction, his mouth twitches slightly in discomfort. But that's it. He's a porcelain doll throughout the movie; a Dasara effigy of Ravana standing bravely in the wind as it is pummelled and punctured with bows and arrows.

Manoj Bajpai, a co-convict sympathises with his poignant martyrdom, as do other sundry souls in the jail. Girlfriend Manasi (Mugdha Godse) and his mother are meanwhile fighting valiantly to get him bailed. Of course they have to rely on a seedy lawyer who siphons away their money, is persistently and annoyingly optimistic about Parag's chances and accomplishes zilch for all his talk. I don't know if Bhandarkar intended it this way, but there is not a single likeable character in the movie. While Manasi and mother thrash around impotently outside the jail to get Parag acquitted, Parag's pleas take the form of autistic grunts of desperation.

Bhandarkar takes great joy in filming the squalid details of jail life in gory detail - the barf-inducing food, the shared toilets, the little drain of water that is opened everyday for the inmates to wash themselves, the overcrowding of jails in monsoon as homeless people find excuses to get in. Thane and Yerwada jails of Bombay are duly thanked in the beginning.

Amongst all this is the token Salman Khan character (SLC), who is imprisoned for the truly heinous crime of mowing down six sleeping streetdwellers with his car. Bhandarkar of course cannot resist some Shakespearan irony and so, SLC gets bail much quicker than any of the real innocents.

One really wishes Bhandarkar would stop preaching with Shirdi Sai Baba style parables. The movie is full of black-and-white stereotype characters - young, luscious, wrongly implicated good guys, potbellied mafia dons, guardian-angel and devil like characters who preach the path of good and evil to Parag. In the end the good triumphs, of course. Oops! I think I just spoilt the delightful suspense for you.

And that brings me to the next point - that there is absolutely no suspense or intrigue in Jail. Hell, there is very little of any emotion other than blind despair. Bhandarkar only attempts to push the audience further and further into despair with his enthusiastic portrayal of the sordidity. At the end of the film, he attempts to inject respectability into this exercise by solemnly crediting the Commonwealth Human Rights' Initiative. Some figures (about 2.57 lakh) of the number of innocently jailed people in India are flashed briefly on the screen, followed by a childish appeal for their rights.

But by this time you are already at the cinema hall exit, hoping to protect your own basic rights - specifically the right to say no to mawkish, pontificating trash. Neil Nitin Mukesh's eventual release from the jail (there I go spoiling it for you again), coincides with your release from the clutches of a garrulolus, self-absorbed, pseudo-evangelicial director who doesn't know when to stop talking.

What else to say, but keep safe this week. Stay clean and sober. Avoid jail.
Share. Save. Connect.
Tweet
JAIL SNAPSHOT

I like reading even if the words are not used more commonly, but using them for the sake of using them.. hmm

Anon on 7th Nov 2009, 1:03am | Permalink
Hey, cool it with grandiose words, okay? We get it, we all like to use them, albeit in an interview or to impress people.

But, this is a fun review site, we come here just to get our daily dose of humor. I don't want to feel like I'm reading my English textbook.

ADVERTISEMENT
This page was tagged for
Jail hindi movie
Jail reviews
release date
Neil Nitin Mukesh, Mugdha Godse
theatres list
Follow @fullhyderabad
Follow fullhyd.com on
About Hyderabad
The Hyderabad Community
Improve fullhyd.com
More
Our Other Local Guides
Our other sites
© Copyright 1999-2009 LRR Technologies (Hyderabad), Pvt Ltd. All rights reserved. fullhyd, fullhyderabad, Welcome To The Neighbourhood are trademarks of LRR Technologies (Hyderabad) Pvt Ltd. The textual, graphic, audio and audiovisual material in this site is protected by copyright law. You may not copy, distribute, or use this material except as necessary for your personal, non-commercial use. Any trademarks are the properties of their respective owners. More on Hyderabad, India. Jobs in Hyderabad.