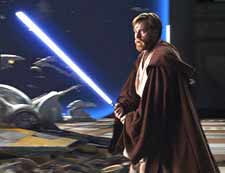 Rohit Murari / fullhyd.com
EDITOR RATING
8.0
Performances
Script
Music/Soundtrack
Visuals
NA
NA
NA
NA
Suggestions
Can watch again
NA
Good for kids
NA
Good for dates
NA
Wait for OTT
NA
"A long time ago in a galaxy far, far away…" Who hasn't been enamoured by this opening line to every Star Wars movie? Okay, Star Wars non-junkies haven't been but since this is a Star Wars review they do not count.

Like the two movies before it, and the three after (speaking strictly from the perspective of the timelines of the stories in the movies), it has not been made for the average movie-goer who believes in getting his two hours and ten minutes of entertainment (though he has to be asleep to be not enthralled by the magnificent special effects). But if you are among those who have been doing nothing save looking forward to 20th May 2005 for as long a time as can be made publicly known without risking a trip to the loony bin then this movie will do to you what The Empire Strikes Back and The Return of the Jedi did - completely blow you away.

Unarguably the most important in the series for it binds all the six into one coherent unit, Episode III is also the goriest and most in-your-face Star Wars ever. It is also technologically the most brilliant. Where it does not come up to scratch is in the treatment of scenes between Anakin (Hayden Christensen) and Padme (Natalie Portman) - they look artificial and awkward, and the movie tends to lose its grip on even the most ardent of the Star Wars fans.

ROTS is about the journey of Anakin Skywalker into the dark side as he becomes Darth Vader, the most evil of Siths in the whole galaxy. That transformation is a little sudden, and a little beyond the realms of human comprehension. However, once Supreme Chancellor Palpatine (Ian McDiarmid) reveals himself to be the Sith Lord, Dark Sidious, and takes young Skywalker as his apprentice the rapture graph of the movie just keeps travelling north until the very end when we hear the legendary Darth Vader's voice of James Earl Jones.

Star Wars clicks because of its inherently human core. Strip it of all the space-age content, and you would find that at heart it is a story of good versus evil, a story of heroes and villains, a story of father and son. Perhaps it is closer to reality than any other movie. When Palpatine proclaims himself to be the Emperor of the galaxy amid tremendous support, Padme says, "So this is how democracy dies - to thunderous applause." Is that not something we identify with?

What is a good movie if not one that has such a tremendous following the world over? Star Wars has a legion of admirers. It has spawned websites, created a whopping memorabilia industry, and birthed a cult that has grown, not just in strength but also in the vociferousness of its allegiance to this epic adventure.

ADVERTISEMENT
This page was tagged for
Star Wars - Episode III english movie
Star Wars - Episode III reviews
release date
Ewan McGregor, Samuel L Jackson
theatres list
Follow @fullhyderabad
Follow fullhyd.com on
About Hyderabad
The Hyderabad Community
Improve fullhyd.com
More
Our Other Local Guides
Our other sites
© Copyright 1999-2009 LRR Technologies (Hyderabad), Pvt Ltd. All rights reserved. fullhyd, fullhyderabad, Welcome To The Neighbourhood are trademarks of LRR Technologies (Hyderabad) Pvt Ltd. The textual, graphic, audio and audiovisual material in this site is protected by copyright law. You may not copy, distribute, or use this material except as necessary for your personal, non-commercial use. Any trademarks are the properties of their respective owners. More on Hyderabad, India. Jobs in Hyderabad.