Student Of The Year Review 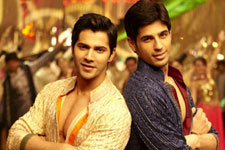 EDITOR RATING
5.0
Performances
Script
Music/Soundtrack
Visuals
6.0
5.0
6.0
6.0
Suggestions
Can watch again
No
Good for kids
No
Good for dates
Yes
Wait for OTT
No
Karan Johar is revered for his surreal perception of reality, and all his movies have that one layer of something not quite right to make them almost dreamlike and fantastical. In other words, loads and loads of fluff, and every attempt to avoid any glimpse of realism. Turning 40 has not quite changed his acumen, and his latest offering, Student Of The Year, is almost a defiant challenge to critics and friends alike.

So there is this world - a co-ed boarding school named St Teresa, in Dehradun - untouched by grime and grittiness. It is a colourful (and how!), blingy, self-sufficient space, inhabited by glamour and glitz, by teenagers who prefer muscle-flexing, short skirts and preening to textbooks, and by handsome coaches and gay Deans. For some reason, the "Student Of The Year" annual challenge is something that all these indifferent teenagers (they are not too concerned with other responsibilities or excelling in education) want to be a part of, and to eventually win a trophy.

Enter Abhimanyu (Siddharth Malhotra), a "middle-class" orphan boy, whose life can change for the better if he wins the challenge. He is sincere and devoted to his fitness regime and track-running, and, given his social status, he is relatively more intense than the other feather-brained students running about and having a blast. He is here on scholarship, and therefore to be looked down upon.

Abhi's entrance ruffles a few feathers, most notably those of Rohan (Varun Dhawan), the son of a very rich man (to put it simply). Rohan is surrounded by cronies (the natural outcome of having a wealthy father), and is quite the dude. In time, Abhi and Rohan become best friends.

Shanaya (Alia Bhatt) is a stuck-up, spoilt, vain, self-indulging little rich girl, who is also Rohan's girl. She loves her clothes (mostly short), and her dancing. Rohan has the hots for Tanya (Sana Saeed), too, so Abhi's sympathies slowly veer towards Shanaya, and before you can say "Disco Deewane", a love triangle completes the picture.

With tempers running high, the trio compete for the annual trophy, and thus enters the seamier side of a fluff-filled high-school universe. Who wins the trophy? Who wins the girl? How many exotic locales exist in the boarding school? How come these kids down tequila shots with such confidence? To find out, you have to watch Karan Johar's Student Of The Year.

Rensil D'silva may have penned a decent story, and the idea of an exclusive school for spoilt brats may not be an unbelievable one, but the execution leaves much to be desired. The direction and all other tools used to put this story on the big screen are flawless. Each department has done its job. Somehow, however, it does not come together as a convincing whole. In other words, most of the situations are dealt with in a highly pretentious manner.

It is a fantasy world, you may argue, a separate universe. True, but the makers of the film give us the distinct impression that they are trying to pass this off as real life. This unnerving portrayal of a high school may leave you with a sense of either awe or disbelief. The structure of the screenplay is perfect - every new development takes place when it has to, intermission comes at the perfect plot point, the screen bursts into music videos at appropriate intervals - and the graph of the main characters is watertight. Despite all of the above, the movie is just not compelling enough to make you relate to any of the characters or situations.

Siddharth Malhotra is the star in the movie. He is sincere, talented and just about right to be a teenage idol. His character is morally upright, almost, and Siddharth manages to make him the most believable of the lot.

Varun Dhawan looks like he had a lot of fun during the filming. He does not seem to be too uncomfortable in his role as the neglected, spoilt son of a rich, indifferent father.

Alia Bhatt is a revised and upgraded version of Poo from K3G. She just has to look pretty, and be the teen diva in her surroundings. Alia shows a lot of promise, and may just have made a wrong decision about her debutant role.

Rishi Kapoor is full of surprises, and he enjoys his acting, you can tell. The other actors - Ram Kapoor, Ronit Roy - are wasted in their little roles.

Everything from cinematography to production design and costume is larger than life, and dreamlike. There is too much colour, and that may affect your eyes at times. The music is not OTT or of superior quality, but the songs are catchy, and the album is already a hit.

Watch Student Of The Year only if you accept and love the unreal worlds that Karan Johar creates. If, however, you are still suffering a Gangs Of Wasseypur hangover (in a good way), then you can give this movie a miss.
Share. Save. Connect.
Tweet
STUDENT OF THE YEAR SNAPSHOT 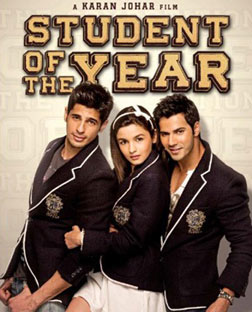 ADVERTISEMENT
This page was tagged for
student of the year movie in hindi
Student Of The Year hindi movie
Student Of The Year reviews
release date
Siddharth Malhotra, Varun Dhawan
Follow @fullhyderabad
Follow fullhyd.com on
About Hyderabad
The Hyderabad Community
Improve fullhyd.com
More
Our Other Local Guides
Our other sites
© Copyright 1999-2009 LRR Technologies (Hyderabad), Pvt Ltd. All rights reserved. fullhyd, fullhyderabad, Welcome To The Neighbourhood are trademarks of LRR Technologies (Hyderabad) Pvt Ltd. The textual, graphic, audio and audiovisual material in this site is protected by copyright law. You may not copy, distribute, or use this material except as necessary for your personal, non-commercial use. Any trademarks are the properties of their respective owners. More on Hyderabad, India. Jobs in Hyderabad.