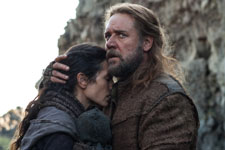 Kritika Deval / fullhyd.com
EDITOR RATING
6.5
Performances
Script
Music/Soundtrack
Visuals
8.0
5.0
7.5
7.5
Suggestions
Can watch again
Yes
Good for kids
No
Good for dates
Yes
Wait to rent it
No
The thing about Aronofsky, dear readers, is that he tells his stories in the voice of the subconscious. You know how, sometimes, you dream something that could easily be a regular day in your life? Except that you spot something in it that cannot possibly have any relationship to reality.

Not that this retelling of the story of a man responsible for humanity's second innings has much to do with realism. In fact, the whole narrative runs very much like a larger-than-life amalgamation of a hell fire and brimstone sermon, a child's imagination, a sinner's nightmare, and the life and times of a man who knows exactly what to do with both, but not quite.

Let us begin right at the beginning, with little Noah (Dakota Goyo) about to receive the skin of The Snake, i. e. the one that led Eve astray, as the skin is a family heirloom. Just when you're thinking that has to be the luckiest kid on Earth, the bequest is thwarted by Tubal-Cain (Ray Winstone), who murders Noah's father and takes the skin for himself.

Several years, a few environmental miracles, a story from Methuselah (Anthony Hopkins), and some encounters with six-armed stone fallen angels later, Noah (now a thoroughly forbidding yet endearing Russel Crowe) declares himself in charge of the largest immigration project of all time - the construction of an Ark that will give a second chance to all of God's creatures, as God seeks to rid the planet of the moral blight stemming from Tubal-Cain's reign.

All that is in Noah's way is Tubal-Cain, and Noah's own ambiguity as to whether humanity even deserves a second chance.

For all the grandiosity of Aronofsky's drama, Crowe lends an air of rawness to Noah's moods and deeds that is downright primordial in nature. These are the deeds and thoughts of a man whose decisions are as primitive as they are eternal. Here is where the battle between emotion and duty is at its highest peak. And Crowe lends just the right amount of vulnerability to a character that must be so very uncompromising. Anthony Hopkins has a helluva time playing Methuselah, as does Ray Winstone, Tubal-Cain. In fact, Winstone is brilliant as the perfectly evil foil to Crowe's air of righteousness.

The rest of the cast, including Jennifer Connelly, Emma Watson, Logan Lerman and the rest, fit the bill well, and perform just as they ought to.

The slight surrealism that riddles the plot finds its expression in the graphics, which are stunningly, if often quite ridiculously, rendered. The final battle will make some rather boring parts more than bearable. The music sweeps you into the mood of the epic, even as it sends you perilously close to dozing at times.

For all its tendency to meander and pontificate, Aronofsky's Noah reminds you exactly why we had so much fun listening to our grandparents' rendition of epics when we were little.
Share. Save. Connect.
Tweet
NOAH (3D) SNAPSHOT 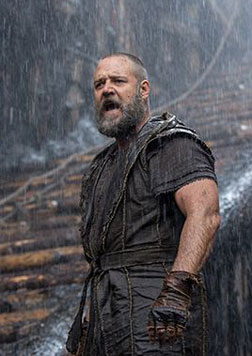 ADVERTISEMENT
This page was tagged for
Noah (3D) english movie
Noah (3D) reviews
release date
Russell Crowe, Jennifer Connelly
theatres list
Follow @fullhyderabad
Follow fullhyd.com on
About Hyderabad
The Hyderabad Community
Improve fullhyd.com
More
Our Other Local Guides
Our other sites
© Copyright 1999-2009 LRR Technologies (Hyderabad), Pvt Ltd. All rights reserved. fullhyd, fullhyderabad, Welcome To The Neighbourhood are trademarks of LRR Technologies (Hyderabad) Pvt Ltd. The textual, graphic, audio and audiovisual material in this site is protected by copyright law. You may not copy, distribute, or use this material except as necessary for your personal, non-commercial use. Any trademarks are the properties of their respective owners. More on Hyderabad, India. Jobs in Hyderabad.