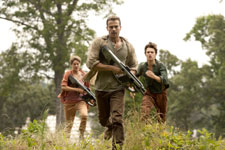 Nupur Barua / fullhyd.com
EDITOR RATING
5.0
Performances
Script
Music/Soundtrack
Visuals
6.0
5.0
6.0
7.0
Suggestions
Can watch again
No
Good for kids
No
Good for dates
Yes
Wait for OTT
No
Divergent, the first in the series that leads to the sequel Insurgent, was not very well-received when it released exactly a year ago. Comparisons were made, mostly unfairly but inevitably, to The Hunger Games, and the story itself had none of the thrills that the Jennifer Lawrence starrer had. The only good thing to come out of it was the sudden interest in the trilogy of books that this series is based on, and Young Adult Literature suddenly seemed to have options that went beyond vampires and werewolves.

Into a dystopian world. The movie picks up a few days after the events that led to chaos in the previous movie. Many people are dead, and Tris (Shailene Woodley) is in hiding along with her brother Caleb (Ansel Elgort), Four a.k.a. Tobias Seaton (Theo James), and Peter (Miles Teller), at the Amity camp.

Tris still has nightmares about the fact that she killed Will, a close friend, and she knows that they cannot stay with the peaceful Amity community forever. In fact, she is bored out of her mind, and is determined to get out and kill the Erudite leader, Jeanine (Kate Winslet), who she believes is responsible for her parents' death. Four thinks they should wait it out, but just when things become heated between Peter and Tris, forcing Amity leader Johanna (Octavia Spencer) to impose an ultimatum, the decision is taken out of their hands altogether.

Tris is divergent, which means that she belongs to all the five factions - Abnegation, Candor, Amity, Erudite and Dauntless - that the keepers of the society have created to make the world a more disciplined place. The problem is, each individual can only belong to one group, inherently, and divergence is seen as a threat.

Jeanine's army has found a box that contains a message from the founders of their society. The problem is that this sealed contraption can only be opened by divergent citizens, and she sends her men out to look for them. The army reaches Amity, and the renegade group decide to run for their lives, especially after Peter betrays their position.

The remaining trio jump into a train that is filled with the Factionless - the outcastes, or the ones who never made the cut to fit into any faction. When Four identifies himself, they are led to the headquarters of the Factionless, led by Evelyn Seaton (Naomi Watts), long believed dead, and also Four's mother. She wants her son to gather his Dauntless comrades and take over from Jeanine. Four refuses, and Tris and he continue their journey to the Candor section of the city, where the rest of the Dauntless wait, while Caleb decides to go his own way.

What Tris and Jeanine and everybody else do not know and discover much later is that Tris is the only one who can open the box. Will Tris avenge her parents' deaths before Jeanine captures her? Or will Four succeed in leading a joint coup against Jeanine? Or worse, how many will have to die for justice to prevail? And will Tris ever forgive herself enough to make a difference to the society?

As with the first installment, the story does not question the system so much as it concentrates on separating the good guys from the bad. The lines become blurred pretty quickly, but it still remains a predictable piece of revenge drama and a journey of self-discovery. Tris still does not care enough about the society to change it, and her reasons for rebellion are still petty (relatively) and selfish. The characters still lack enough fire to make you want to root for them, and you will still watch with some detachment.

Tris is still surly, and scowls at everybody. She lacks the fire and strength of character that Katniss of The Hunger Games series possesses (yes, the comparison is inevitable). You wish Tris would get it over and done with already, instead of making you sit through what seem like hours of self-doubt and self-pity. The only real character is Evelyn - she is a cunning woman, and she makes no bones about it. The dialogues are drab and uninspiring, and there are just too many unrequired twists and turns that make this movie somewhat tedious to watch.

Shailene Woodley has not matured much since the previous film. Her range of expressions is narrow, and she manages, yet again, to look disinterested in the events of the movie. She is physically fitter and faster, but that is almost the only improvement. She has no chemistry with her co-star, Theo James, who is markedly better than he was in the first film.

Ray Stevenson is barely there, and Octavia Spencer, like Ashley Judd in Divergent, is underused. Miles Teller proved his worth with Whiplash, thankfully, because you would never know his talent from the role he plays here. Naomi Watts is convincing, and Kate Winslet is a little viler, making the two actors the only reason to watch the film.

The production and costume designs are similar to those in Divergent, of course, but a little colour has been added. The locations look alike, which may be the point of a dystopian world, but it becomes monotonous. The VFX is a vast improvement on the first movie. The simulated worlds are more believable, fantastical though they may be. Some of the cinematography is stunning, especially the overhead shots of the outdoors. Again, there is a balance between sets and real locations, and a little variety is always welcome.

There is just one train sequence, disappointingly, since that was the best part of the first movie, as far as visuals were concerned. The movie is the first in the series to be shot in 3D, and it makes a huge difference to how you view the visuals. The editing department could have made the narration crisper by cutting out some of the introspective sequences. The music is better, and more apt to the flow of the film.

Insurgent leaves you with many questions, but we can answer the most important one - yes, there will be a third instalment, in two parts, as seems to be the norm of any movie series based on YA Literature. If you are wondering if the books are worth reading, the answer is, again, yes. The books, so far, are better than the movies, but even they cannot beat The Hunger Games trilogy.

Watch Insurgent only if you have already watched Divergent and are curious to know how the morose characters end up (they are never happy, since, again, this is a dystopian world). The next installment promises a new world, literally, and may be something to look forward to, but the actors need to clean up their, well, act, otherwise this series will soon be forgotten by the fickle, young audiences that it aims to please.
Share. Save. Connect.
Tweet
INSURGENT SNAPSHOT 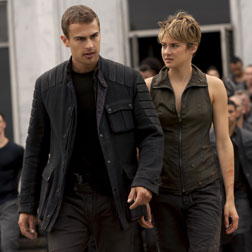 ADVERTISEMENT
This page was tagged for
Insurgent english movie
Insurgent reviews
release date
Shailene Woodley, Miles Teller
theatres list
Follow @fullhyderabad
Follow fullhyd.com on
About Hyderabad
The Hyderabad Community
Improve fullhyd.com
More
Our Other Local Guides
Our other sites
© Copyright 1999-2009 LRR Technologies (Hyderabad), Pvt Ltd. All rights reserved. fullhyd, fullhyderabad, Welcome To The Neighbourhood are trademarks of LRR Technologies (Hyderabad) Pvt Ltd. The textual, graphic, audio and audiovisual material in this site is protected by copyright law. You may not copy, distribute, or use this material except as necessary for your personal, non-commercial use. Any trademarks are the properties of their respective owners. More on Hyderabad, India. Jobs in Hyderabad.