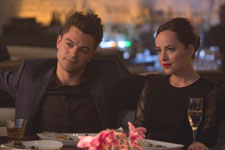 Kritika Deval / fullhyd.com
EDITOR RATING
3.5
Performances
Script
Music/Soundtrack
Visuals
4.5
2.0
4.0
7.5
Suggestions
Can watch again
No
Good for kids
No
Good for dates
Yes
Wait to rent it
Yes
Alrighty. So, we have a super-souped-up Shelby Mustang, an ex-con who decides that parole time would be a good time to play hooky for revenge, a hot blonde with a plum in her mouth (Imogen Poots - hah! the absolute funniest fact about the film!), and a guy who does things no villain would ever in a million years do. The thing is, this is Need For Speed. It is based on a game people play when they want to do virtual violence involving sexually arousing vehicles. The point is, one hardly expects to find gut-wrenching emotion or a pun so very intellectually rib-tickling that you'll find yourself quoting it in a bid to appear smart.

What one does not expect is a plot so utterly insanely inane that the inanity overrides any and all excitement that one might find in the aforementioned vehicles.

So here is the plot.

Tobey Marshall (Aaron Paul), along with three other partners, builds a race car out of a Shelby Mustang for Dino Brewster (Dominic Cooper), a professional racer with his own race car company. Dino is jealous of Marshall's abilities as a racer and an engineer, but acknowledges the latter's skill with the offer of 25% on the sale of the vehicle. When Marshall manages to get the car sold for 2.7 million dollars by making the car touch the speed of 235 mph, to the aforementioned British blonde Julia Madden, a car dealer for the super-wealthy, Dino is miffed because he can't drive so well.

He races Marshall and Marshall's partner Little Pete (Harrison Gilbertson) in his illegal Koenigsegg Ageras, with the offer that Marshall gets 75% of the Mustang's sale if he wins, and forfeits his 25% on losing. During the race, Little Pete manages tick Dino off thoroughly by constantly coming in his way, with the result that Dino bumps into Pete's car as they drive over 200mph. Pete ends up in the ravine over which they're driving, all in a rather spectacular fashion. However, Dino flees the scene and erases all evidence of his own involvement, resulting in Marshall's arrest for 2 years for involuntary manslaughter.

Upon his release, Marshall's sole aim is to get Dino to pay, of course, by engaging in yet another race with a man who is not exactly known for fair play. The stakes are much higher this time. This race is the DeLeon, a race so underground nobody knows who sponsors it. Marshall must break parole, and make it to San Francisco in under 48 hours in order to enter the race, all to be accomplished with the aid of his erstwhile partners, the infamous Shelby Mustang, and a woman whose idea of a pun is to replace words in well-known quotes with branded objects (never judge a girl by her Gucci boots? really?). To make matters more interesting, Dino is offering his best race car to anyone who stops the Mustang.

When watching action films, especially those involving cars, one usually thinks of other commuters and their vehicles as inanimate objects. Filmmakers are generally thoughtful enough to make very easy, using humour or distance to take your mind away from it. In the case of Need For Speed, though, you can often see the confusion and horror on the faces of co-commuters as they go hurtling off of the road, and you know that what's happening to them will probably cause a lot of damage.

The question is, why would the makers do that when it is obvious that they want us to like Marshall and even empathise with his cause? Aaron Paul is obviously meant to play the facsimile of a charming-yet-damaged guy who is basically good at heart. But you see absolutely no evidence of this in Marshall's actions - only in Paul's not-very-successful attempts at appearing emotionally scarred.

Or, how about this? Dino's fiancée was formerly Pete's girlfriend, and unearths evidence of Dino's involvement in Pete's death by an act as simple as checking through his bills, which happen to be on his work computer, which are not even password protected. Obviously much too difficult for the police who were on the case, hmmm?

Then, there are the lines. Actually, no. We do not want to think of the lines and relive the headache induced by them in the theatre (we're pretty sure we heard a scream of "Make it stop!" somewhere in the theatre).

The performances by everyone, including Aaron Paul, are as half-hearted as the effort at the writing that went into their characters. Imogen Poots is especially annoying as she relives every cliché of a girl trying to be gutsier than she appears. Dominic Cooper doesn't even bother to emote.

If any of these things mean anything to you, you might want to watch this film, especially because some (although a very disappointing few) of the race sequences are more than spectacular, with the cake going to the one where Pete dies (what to you say about a car flick where the best scene involves someone dying?). However, you might find that none of this makes up for the sheer tedium of sitting through a dumb action flick with barely any action.
Share. Save. Connect.
Tweet
NEED FOR SPEED (3D) SNAPSHOT 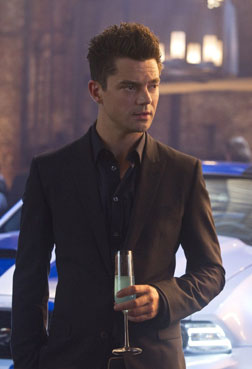 ADVERTISEMENT
This page was tagged for
Need For Speed (3D) english movie
Need For Speed (3D) reviews
release date
Aaron Paul, Dominic Cooper
theatres list
Follow @fullhyderabad
Follow fullhyd.com on
About Hyderabad
The Hyderabad Community
Improve fullhyd.com
More
Our Other Local Guides
Our other sites
© Copyright 1999-2009 LRR Technologies (Hyderabad), Pvt Ltd. All rights reserved. fullhyd, fullhyderabad, Welcome To The Neighbourhood are trademarks of LRR Technologies (Hyderabad) Pvt Ltd. The textual, graphic, audio and audiovisual material in this site is protected by copyright law. You may not copy, distribute, or use this material except as necessary for your personal, non-commercial use. Any trademarks are the properties of their respective owners. More on Hyderabad, India. Jobs in Hyderabad.