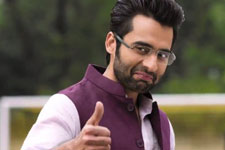 Nupur Barua / fullhyd.com
EDITOR RATING
5.0
Performances
Script
Music/Soundtrack
Visuals
6.0
4.0
5.0
6.0
Suggestions
Can watch again
Yes
Good for kids
No
Good for dates
Yes
Wait for OTT
Yes
With elections less than a month away, it makes perfect sense for producer Vashu Bhagnani to release a movie that deals with politics. He must have guessed that a topic like this will grab eyeballs, since the entire nation is in the mood to lament on the direction the country is headed in. Besides, the content overpowers the presence of his son, Jackky Bhagnani, not known for his achievements as an actor. The movie has been mired in controversy (thanks to Pepsi's objection to the title, on which they claim to have a copyright), and should have been released earlier, but it could not have come at a better time. It is a pity that it does not live up to expectations, though.

Abhimanyu Kaul (Jackky Bhagnani) is a content young man, with a cushy job in Tokyo, a live-in girlfriend Anvita (Neha Sharma) and a crazy best friend (Kayoze Irani). He loves his life, and spends most of his time shocking the Japanese with his Bollywood moments. And then suddenly, out of the blue, his life changes drastically.

It all begins with his ailing father, Dashrath (Boman Irani) summoning him back to India. Dashrath is the Prime Minister of the country, no less, but there is nobody he can trust in his party to take over his position should he die. His trusted PA Akbar Patel (Farooq Sheikh) is given the dubious job of mentoring the young Abhimanyu.

When the Prime Minister dies, his party decides to name his son the interim Prime Minister, at least till the elections, six months away. Not only will this ensure a wave of sympathy votes, but also a margin of forgiveness by the people for all the things that the party has done wrong. Any public anger can always be blamed on Abhimanyu's inexperience, of course.

While the young man is still trying to come to terms with this unexpected role that he has to play, Anvita has a problem. She does not want this life, and also resents the scrutiny that their relationship is subjected to.

Akbar Patel, in the meantime, sees the mistakes that the new Prime Minister is making, but realises that this may be just what the country needs, and so he trains him in political know-how with plenty of patience.

The feisty and overenthusiastic Abhimanyu comes up with some radical ideas to change the country, without dwelling too much on the condescension that is bound to pour in from politicians and citizens. What, however, of his girlfriend? How can he handle her temper tantrums that have become more and more regular ever since he donned the politician's garb?

There is a slight confusion about whether this is a political movie or a romantic comedy. The writers of the film try to make it a bit of both, and that is where they lose the plot. If it were a love story about two individuals making it through turbulent times with politics in the background, the movie would have held more appeal, maybe.

Which is not to say that it is badly written. Like most screenplays these days, however, this one too has too many things happening on a superficial level. The solutions to the nation's problems may be radical, but the acting Prime Minister shows no determination as such to solving issues. There are several references to context in current Indian politics, including the name of the party, the campaigns in villages, and the maudlin reactions to dynastic policies, but even when the writers are making a comment on society, they play it safe. The portrayal is rather rosy.

Also, there is no reason for Anvita to be so bipolar and unreasonable, and there is absolutely no reason for Abhimanyu to put up with it. The screenplay is essentially an exploration of the toll that careers take on relationships, but given that the subject is so sensitive, especially with real elections just around the corner, you may be less sympathetic to the problems that the young lovers face.

However, through all the fluff, there is a glimmer of hope, and wishful thinking - maybe we, as a nation, need somebody like Abhimanyu to bring us back to our senses and to make this country a better place.

Jackky Bhagnani is sincere in his portrayal. This has to be his best work yet, and he has obviously matured over the years. He believes in what he is doing on screen, and it shows.

Neha Sharma, on the other hand, yo-yos between relatable and irritating. She shows versatility, but at times, she seems to have switched off from her role.

Boman Irani and his son Kayoze Irani deserve better roles, as does Meeta Vasisht. The scene-stealer is obviously Farooq Sheikh, in what eventually turns out to be the last movie he stars in before his death. He is subtle and a breath of fresh air amidst the chaos that the screenplay projects.

The production design is a cross between a Karan Johar movie and a Prakash Jha movie. In other words, you will see realistic settings in some places, and then candy floss in others.

The costumes are average, but there is too much colour coordination between the production design and the costume design. The overall effect lacks authenticity, and everything is just a little too bright.

The music is already popular, but it is just that - popular. There are no soul-stirring numbers, or even melancholy love songs (this is a love story, after all).

The cinematography is let down by average production design. The editing is suitably restrained for a story like this, and the editor is responsible for keeping it interesting.

With a dearth of good movies this weekend, Youngistaan may not be a bad option. It makes you think a little, before it distracts you with a love story. And one reason to watch it is Farooq Sheikh, of course. Worth sitting through everybody else, just to see him one last time.
Share. Save. Connect.
Tweet
YOUNGISTAAN SNAPSHOT

ADVERTISEMENT
This page was tagged for
Youngistaan hindi movie
Youngistaan reviews
release date
Jackky Bhagnani, Neha Sharma
theatres list
Follow @fullhyderabad
Follow fullhyd.com on
About Hyderabad
The Hyderabad Community
Improve fullhyd.com
More
Our Other Local Guides
Our other sites
© Copyright 1999-2009 LRR Technologies (Hyderabad), Pvt Ltd. All rights reserved. fullhyd, fullhyderabad, Welcome To The Neighbourhood are trademarks of LRR Technologies (Hyderabad) Pvt Ltd. The textual, graphic, audio and audiovisual material in this site is protected by copyright law. You may not copy, distribute, or use this material except as necessary for your personal, non-commercial use. Any trademarks are the properties of their respective owners. More on Hyderabad, India. Jobs in Hyderabad.