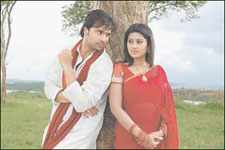 EDITOR RATING
1.0
Performances
Script
Music/Soundtrack
Visuals
NA
NA
NA
NA
Suggestions
Can watch again
NA
Good for kids
NA
Good for dates
NA
Wait for OTT
NA
The first thing you should do after watching Manasu Palike Mouna Raagam is to destroy all evidence that you did. Unhinge the chair you were sitting on in the hall, wipe out all your fingerprints from it, then hide it in a corner. That way, nobody can prove that anyone watched the film sitting in that seat number. Next, come outside and bomb the theater into rubble. That way, nobody can prove that you tampered with key evidence. Finally, go home and drink a bottle of cyanide. That way, nobody can ever extract the truth out of you. Just to tie up all loose ends, bury that bottle very far away from home.

MPMR looks like a cross between an art film and a suicide note. The director of this one seems to have tried to make a K Vishwanath kind of film, forgetting one important thing. Even we have forgotten it now - it's hard to remember anything after nearly 3 hours of this one. But whatever it is, he should remember it next time.

The film starts with docile Gouri (Sneha) losing her parents in a Tsunami, and feeling that nothing can get worse. This is a feeling you get several times in the film yourself. Just then Raghunath (Sarath Babu) and his wife Mangala (Chandana) come to the village, and adopt her. She goes to their huge house in the city and becomes a quasi-cook there - while Raghunath is compassionate, Mangala is quite the harridan.

The couple's son Vikram (Vikramaditya) lives in London, and when he comes to India for his sister's marriage, Gouri is impressed by his concern for her, and slowly falls in love with him. We found this out when we read the other reviews on the web - it's hard to make out anything from what's happening on the screen.

Something else happens in between that seems irrelevant to the main theme, unless they've changed the main theme after we saw it. The way this film progresses, actually, it feels like they are changing the main theme even as you are watching it. But to be fair to the film, the best parts are when something is at least happening.

Anyway, towards the end, like any red-blooded male, Vikram tries to sleep with Gouri, who says that it is against the rich Indian culture to sleep with a woman. Or something like that, anyway; by this time, you are willing to accept any moral as long as you can get out before the next show starts - otherwise you'll have to watch the entire movie again.

MPMR is easily one of the worst ever films in Telugu. It's hard to say what is wrong - it's silly, it's slow and it's meaningless. A scene where Sneha gets up from the pandal of her marriage when the groom is arrested and breaks randomly into uncharacteristic song and dance (with a lot of extras gallivanting behind her) is the best example of the thought that fuels this film.

It would be fashionable to say that Sneha is the saving grace - anybody can do what she does in this film. She was perhaps doing someone a favor, or was offered a lot of money, or suffers from really poor judgement. She has all the time in the world to select and rue the correct option from those.

We could tell you about the performances, music, cinematography, editing etc., but what's the guarantee you'll believe us? So here's just one last thing: destroy all evidence that you read this review. And remember to bury that bottle very far away from home.
Share. Save. Connect.
Tweet
MANASU PALIKE MOUNA RAGAM SNAPSHOT

ADVERTISEMENT
This page was tagged for
manase palike moune ragam
yen indha mounam full movie sneha vikramathithan manasu palike mouna raham full movie downlod
Manasu Palike Mouna Ragam telugu movie
Manasu Palike Mouna Ragam reviews
release date
Follow @fullhyderabad
Follow fullhyd.com on
About Hyderabad
The Hyderabad Community
Improve fullhyd.com
More
Our Other Local Guides
Our other sites
© Copyright 1999-2009 LRR Technologies (Hyderabad), Pvt Ltd. All rights reserved. fullhyd, fullhyderabad, Welcome To The Neighbourhood are trademarks of LRR Technologies (Hyderabad) Pvt Ltd. The textual, graphic, audio and audiovisual material in this site is protected by copyright law. You may not copy, distribute, or use this material except as necessary for your personal, non-commercial use. Any trademarks are the properties of their respective owners. More on Hyderabad, India. Jobs in Hyderabad.