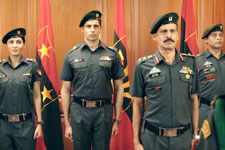 Daphne Rose / fullhyd.com
EDITOR RATING
4.0
Performances
Script
Music/Soundtrack
Visuals
6.0
5.0
4.0
5.0
Suggestions
Can watch again
No
Good for kids
No
Good for dates
No
Wait to rent it
Yes
As the progeny of a serving Indian Army officer, I find myself in a strange predicament every time I watch a movie based on men (and women) in uniform - extremely judgemental on one hand, and yet harbouring a distinct soft spot for the movie on the other, coz fauj. Aiyaary, directed by Neeraj Pandey, he of the Baby and A Wednesday fame, is the kind of movie that had my dual emotions going into overdrive, but from the rating, you know which side eventually won out.

This Manoj Bajpai - Siddharth Malhotra starrer is a thriller about a certain Indian Army intelligence operative going rogue and... further details will be spoilers should you want to catch it in your local theatre or on Prime/Netflix when it eventually does get there. Because Aiyaary is quite the alright movie if you're willing to heed a couple of fair warnings first.

One, the movie is not a Baby, A Wednesday, a Special 26 or even an M S Dhoni for that matter, all of which count amongst some of the director's finest work. It is quite possible that having a Neeraj Pandey tag attached to a movie automatically raises expectations of it and that's what works against Aiyaary.

Two, but it is still a Neeraj Pandey movie. You see flashes of the director's brilliance from his earlier films in parts of this one, but the source material itself is just terribly meh. You sit through the proceedings understanding but still highly incredulous about the rogue operative's motive because they just. aren't. that. convincing. The chap's supposedly a highly skilled covert operative from the leading intelligence establishment in the country, and all you can think of is, have they not heard of emotional intelligence tests to filter out such trainees to begin with?

Third, an A W F U L romance track. Why the Indian movie industry feels the need to introduce a love story into a thriller, we'll never know (actually we do, but that would take us right into spoiler territory). But if that wasn't sinful enough, there's even a lovey-dovey song that pops out at you from nowhere and hampers the pace of the movie only a gazillion times X. That Rakul in this movie can't act to save her life is another matter entirely.

The only redeemable aspect of the film then, and one that makes it immensely watchable, is Bajpai's performance. There's a reason we referred to this movie as a Manoj Bajpai - Siddharth Malhotra starrer earlier on, despite Malhotra receiving star billing, and this is that reason. As a viewer, you look forward to every scene Bajpai's in because you know he'll make it good, and boy, does he. It reminds you of his Shool days, and that if there is any actor who can walk away with accolades in a half-cooked movie, like K K Menon in Shaurya, it is him.

The other actors in this stellar ensemble that boasts of some of the finest performers of our times - Naseeruddin Shah, Anupam Kher, Kumud Mishra, Adil Hussain etc - too, put in great performances, and are a joy to behold, Shah in particular. Siddharth Malhotra, despite not having a body of work as diverse as those of his peers, puts in a decent performance as well, and has the whole body language and personality of a young Army officer down pat.

Long story short - with the actual movie stuck somewhere in the second, third and final acts of the movie, this is a film best suited to those that truly believe that patience is a virtue. But frankly speaking, if you have time for just one movie this weekend, let it be Black Panther. Way more fun and absolutely worth your money.
Share. Save. Connect.
Tweet
AIYAARY SNAPSHOT 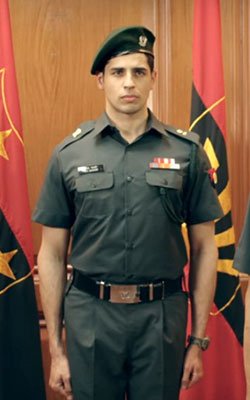 See Aiyaary full details
AIYAARY USER REVIEWS
1 - 1 OF 1 COMMENTS
POSITIVE  |  NEGATIVE |  NEWEST  |  OLDEST  |  MOST HELPFUL  |  LEAST HELPFUL
USER RATING
7.0
1 USER
Performances
Script
Music/Soundtrack
Visuals
8.0
7.0
6.0
8.0
Can watch again - Unsure
Good for kids - No
Good for dates - No
Wait to rent it - Yes
Prashast Singh on 17th Feb 2018, 1:40am | Permalink
AIYAARY, the much-hyped action thriller is a film totally for the class audiences which can even entertain masses but given the fact that above anything else, it lacks the signature thrill quotient of Neeraj Pandey's previously acclaimed films, it might not go down well with everyone. The film clearly misses Neeraj's signature style of writing but as a whole he doesn't disappoint and due to many positives, he renders the film watchable and enjoyable to a certain extent. If for nothing else, just watch the film for Manoj Bajpayee: he just doesn't prove but instead certifies himself as one of the most talented Indian actors ever.

ADVERTISEMENT
This page was tagged for
Aiyaary hindi movie
Aiyaary reviews
release date
Manoj Bajpai, Siddharth Malhotra
theatres list
Follow @fullhyderabad
Follow fullhyd.com on
About Hyderabad
The Hyderabad Community
Improve fullhyd.com
More
Our Other Local Guides
Our other sites
© Copyright 1999-2009 LRR Technologies (Hyderabad), Pvt Ltd. All rights reserved. fullhyd, fullhyderabad, Welcome To The Neighbourhood are trademarks of LRR Technologies (Hyderabad) Pvt Ltd. The textual, graphic, audio and audiovisual material in this site is protected by copyright law. You may not copy, distribute, or use this material except as necessary for your personal, non-commercial use. Any trademarks are the properties of their respective owners. More on Hyderabad, India. Jobs in Hyderabad.