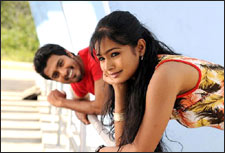 EDITOR RATING
2.0
Performances
Script
Music/Soundtrack
Visuals
6.0
2.0
7.5
7.5
Suggestions
Can watch again
No
Good for kids
No
Good for dates
No
Wait to rent it
No
Perhaps the one belief shared most by mankind is that we'd do much better if we got another chance. Spiritual and motivational gurus will, of course, tell us that we are getting another chance each day, but then spiritual and motivational gurus have very little understanding of reality, just like God.

For Nandu (Skanda), however, God decides to make an exception. So after his life gets well and truly jacked one day and he pleads God to give him another chance, Nandu wakes up the next morning to realize that things are just as they were the previous morning, and that he has a headstart on existence.

The opportunities are unlimited, since he's seen today already, and can manipulate things using his superior information. Of course, since he has no experience of living in a present that he has already seen in the past, it takes him some time to even figure out that he should make the best of it. That's a common human failing - we need a newspaper headline to inform us that we've got a second chance, and a reconnoitre to decide how we'll tackle it.

You could say Nandu does a decent job, mostly since there's no data for how other people have handled a similar situation - he gets himself a job through the same interview he failed at the previous day (or rather the previous version of this day), lands the babe Madhu (Devisri) who snubbed him, averts a suicide bid by a close friend, and then takes on the biggest challenge, averting the murder of a kind-hearted social worker.

Malli Malli is certainly an innovative idea, but fails at the fleshing-out stage. More important than the concept in movies are the script and the screenplay. Director Raj Aditya's failure to exploit the full potential that the material has to offer is tragically reminiscent of the same challenge his protagonist messes up, which is making the most of a day he already knows will pan out in a certain way. There are people who could use that kind of information to become rulers or billionaires, and there are people who will use it to get jobs as computer programmars.

Thus, Malli Malli would have been a fabulous movie if the scripting showed an unemployed struggler turning, say, Prime Minister, in a brilliant and completely credible exploitation of a piece of luck he's had, which is the replaying of a day in his life. That kind of writing, of course, requires enormous time and intellectual effort, which obviously weren't priorities here.

The movie isn't really convincing in what it is either, due to several smaller kinks that betray a lack of attention to detail. It's also slow, feels like Akali Rajyam for half its running time, has insipid comic tracks that feel more like annexures, and is generally devoid of anything gripping. Add to all this the lack of any known faces in the main cast, and it becomes a complete turn-off. The performances are mostly functional, but the music, with some revving electric guitar riffs, is surprisingly good.

ADVERTISEMENT
This page was tagged for
Malli Malli telugu movie
Malli Malli reviews
release date
Skanda, Kalyani
theatres list
Follow @fullhyderabad
Follow fullhyd.com on
About Hyderabad
The Hyderabad Community
Improve fullhyd.com
More
Our Other Local Guides
Our other sites
© Copyright 1999-2009 LRR Technologies (Hyderabad), Pvt Ltd. All rights reserved. fullhyd, fullhyderabad, Welcome To The Neighbourhood are trademarks of LRR Technologies (Hyderabad) Pvt Ltd. The textual, graphic, audio and audiovisual material in this site is protected by copyright law. You may not copy, distribute, or use this material except as necessary for your personal, non-commercial use. Any trademarks are the properties of their respective owners. More on Hyderabad, India. Jobs in Hyderabad.