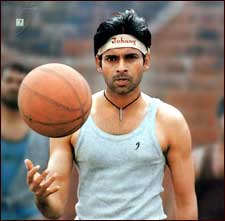 Mithun Verma / fullhyd.com
EDITOR RATING
5.0
Performances
Script
Music/Soundtrack
Visuals
NA
NA
NA
NA
Suggestions
Can watch again
NA
Good for kids
NA
Good for dates
NA
Wait for OTT
NA
"If you can't say anything good, don't say anything at all." That's a fine idea, but it doesn't work in Tollywood! The pitiful truth is, the sadder the film, the more vigorously its makers promote it with windbag press releases and misleading ads. In fact, the promo is often more exciting than the film it plugs. Johnny was never vigorously promoted with misleading ads like those phoney flicks. So it lacks THAT excitement also! As a whole, that is.

Johnny (Pavan Kalyan) is a martial arts expert separated from his wealthy dad (Raghuvaran) and living with a bunch of old city loafers doing, er... loafing. The karate kid on the block is constantly in a tug of war with the local thugs and the police, but abandons this wayward life once he falls for Geetanjali (Renu Desai), a teacher at a school for the disabled.

Before the abandonment, of course, are some of the movies best moments: the witty Irani café scenes, the basketball sequences with some awesome urban background scores & the fight scene where Johnny takes on an entire Karate school. So all these were done before in many Telugu flicks? But not by Pavan, schmuck!

After his being in two years of exile, I always wondered how Pavan would make his next film special. I never imagined that it would be in the form of the heroine as a simple dressed woman that does not fall in love with Pavan but actually coaches him in the martial arts and has an equal-sized character as his. And it's good that I never imagined any of that because none of it happens. Geetanjali is but a standard girl that effectively cannot fend off the cupid vibes, which are ever so pungent from Johnny.

Once the romance stone begins rolling, it gathers no moss at all, because the romance is neat, old-fashioned and very adorable. Gratefully, the hero does not burst into a song for every subtle issue about the heroine. Thank God for some good sense & decency, there's great chemistry between Pavan & Renu.

But too much of chemistry is sure to catalyze a few Zs, and that's exactly what happens in the 2nd half. The interval arrives, leaving us in intense suspense. Not because of any twist in the plot but because the only villain known has been smashed to pulp, and the hero and heroine get hitched. What other interesting things are left to see? Not many, actually!

Geetanjali is diagnosed to carry acute leukaemia in advanced stages and is coughing up blood. And Johnny has to cough up lakhs of rupees to save his loved one. He takes her to Mumbai for treatment & guess what he does for the dough? Sings! That would've killed her and the movie at once, but actually he gets into a fight club & does what he does best.

Whether he wins enough money to save her is anybody's guess. Too many cancer-filled scenes make the 2nd half boring and contagious because the background score also shifts to a droning shehanai - which brings us to an important aspect of the flick: music.

Music is what made Kushi Kushi, just like R P Patnaik made a loser, Nuvvu Nenu! So much was expected out the music of this one, and Ramana Gogula does not disappoint, bitterly. The music will have you in the middle of your seat - with your back against the chair and your elbows on the armrests. This is unlike Kushi, wherein you were also hoarsely singing along or ridiculously tapping your foot.

However, 'Naraazu Kaakura Ma Annayya' does rock your seat off its creaky hinges with slick choreography and all that jazz. Pavan himself has throated a couple of songs. Now if ever there was a weakness in big bro Chiru then it was his singing skills, but that's not the case with Pavan. He has a weakness in singing AND in dancing as well as Chiru!

And finally, here's why this one got the rating it got - the break-up of the **:

* For articulate, realistic action sequences. Well, as real as they can afford to get on screen.
½ For Pavan shaving off his moustache! No, seriously, it's for giving his best performance till date.
½ For the songs.

And here's why it didn't get the rest:

* For having two full songs sung by Pavan! Actually, it's for poor characterisation and rather plebeian camera work for an action flick.
*½ For peppering the flick with a hotchpotch of snail-paced untimely sentimental episodes. Especially in the yaaaaaaawwwwwwwwnnnnn... hmmm... 1 sheep, 2 sheep, 3 sheep, 4 sheep, 5.... Snap! What? Where? Oh, er... in the 2nd half.
½ Same as above - for the songs!

All in all, Pavan does a brilliant job. His stunts are real. His technique is real. His direction is real. His singing is real... annoying! Renu Desai sans 'glamor' is a pleasant surprise at a time when people are actually considering a transfer of Baywatch to Cartoon Network. In any case, she does reasonable justice to her role.

To add an ending remark, Johnny will not allow us to put up corny blurbs like, "Come witness three full hours of sheer - Projection!" We might actually put up something like this: If this is the kind of film you like, then this is a film for you!
Share. Save. Connect.
Tweet
JOHNNY SNAPSHOT

ADVERTISEMENT
This page was tagged for
johnny telugu movie
Johnny Telugu
???? ??????
Jaani Telugu film
Johnny Telugu film
Follow @fullhyderabad
Follow fullhyd.com on
About Hyderabad
The Hyderabad Community
Improve fullhyd.com
More
Our Other Local Guides
Our other sites
© Copyright 1999-2009 LRR Technologies (Hyderabad), Pvt Ltd. All rights reserved. fullhyd, fullhyderabad, Welcome To The Neighbourhood are trademarks of LRR Technologies (Hyderabad) Pvt Ltd. The textual, graphic, audio and audiovisual material in this site is protected by copyright law. You may not copy, distribute, or use this material except as necessary for your personal, non-commercial use. Any trademarks are the properties of their respective owners. More on Hyderabad, India. Jobs in Hyderabad.