Josh / fullhyd.com
EDITOR RATING
8.0
Performances
Script
Music/Soundtrack
Visuals
8.0
9.0
7.0
8.0
Suggestions
Can watch again
Yes
Good for kids
No
Good for dates
Yes
Wait for OTT
No
Disclaimer: This reviewer had to watch the film in Tamil. We can't vouch for dubbing affected elements such as accents and names. The adulation expressed, though, stands immaterial of language.

You know, dubbed films often suck, with multiple characters speaking with the same Nellore accent - and sometimes the same voice, even. Regardless, I'm grateful that Khaidi got dubbed into Telugu instead of being remade. Because our filmmakers borrow the source material but forget to borrow the gumption on which the source worked. Which is why we have situations where a horde of frail old people are risking their lives protesting for justice to farmers, and the director thinks it's a great moment to cut away to a number suggesting "Ammadu, let's do Kummudu".

Adulteration - sorry, contamination - of this sort is what Khaidi escapes from by getting dubbed. And I'm grateful because this is the purest mass film I've seen since Kaththi (the maligned source of Khaidi No. 150).

Most mainstream cinema, particularly mass cinema, is an exercise in set-up and payoff. To our misfortune, far too many filmmakers ignore this paradigm by squandering away precious runtime mainly extolling the star, and then giving lukewarm payoffs which satisfy no one but the fan (to whom, we understand, even sawdust from the hands of their star is celestial stardust).

In the past five years (Katthi was a 2014 Diwali release), I haven't seen a big star mass film which takes set-up this seriously. For instance, the tight tension Khaidi builds in its very first ten minutes, some of our A-list filmmakers could only hope to build by the end of the second act. And in those ten minutes, we don't even get a glimpse of the star.

If you watched the trailer you'd know Karthi is the star, he is a convict, and he is forced into a journey he didn't sign up for. He has a little girl he didn't see in ten years. And 900 kilos of cocaine stopping him from getting to see her. I'd be doing a disservice to the movie and to the viewer if I further explain the plot of the film because, in this film, the set-up is everything. It is what you enjoy. In fact, I didn't particularly care for the first pay-off - the first big fight; it was rather generic with the same action choreography you may expect out of a Boyapati Seenu film.

But I loved how we got there. I loved how Lokesh Kanagaraj (the director) convinced me of the inevitability and utter necessity of Karthi getting down from his lorry and walking into the swathe of blood-thirsty goons. Because we wait for so long, because we believe in all the stakes, and because Karthi becomes the very face of determined resolution at that moment, something as standard as the massy lungi-fold becomes a giddy head-rush!

Kanagaraj's debut film was the fabulously fabulous Nagaram (Maanagaram in Tamil). If you haven't watched it yet, kindly do yourself a favour and watch it already. It's a stylishly directed and feverishly paced set of three stories which intertwine over the course of one night in Chennai. If his talent is impressive, I find his thematic bent outright admirable. He ends Nagaram with the renewed belief that ordinary people standing up for each other is what propels the world.

This theme propels Khaidi, too, even though its star is extraordinary. This, Kanagaraj manages by making many of his ordinary characters undeniable heroes when faced with adversity. If you, like me, are tired and disgusted with the common people of our mass films only existing to be saved by the star and washing his feet with their tears, you'll find the characters in Khaidi exhilaratingly heroic.

These heroes, they can be lean, stout, tall, short, male, female, afraid, or even hurt - they are ordinary people with ordinary means, and they are all defined by that single feature. They understand that winning the fight isn't the matter. Fighting is all.

The best frame in Khaidi, then, features a short, stout, 55-year-old man standing alone in front of a locked door which is being banged and pounded by men who possess an assortment of clubs and knives. He is sweating profusely. His hand and knife tremble with each bang of the door that's giving in. The door may budge, but he refuses to. I watched in admiration as I wished I could be like this short, stout, 55-year-old man.

Khaidi gave me so much to admire in its 147 minutes. Talent, gumption, and heart. It pushed me to the edge of my seat frequently, made me cheer like a 5-year-old at the fantastic climax, and in a tender moment afterwards, it made me shed a tear. If you can't accept a film that doesn't tickle or titillate, then perhaps you won't enjoy Khaidi. For the rest of us, though, it's Happy Deepavali, folks!
Share. Save. Connect.
Tweet
KHAIDI SNAPSHOT 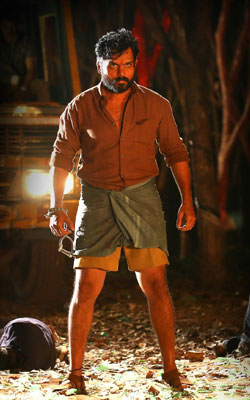 See Khaidi full details
TOP COMMENT
Josh on 27th Oct 2019, 5:28pm | Permalink
My bad. I shouldn't have forgotten about Rangasthalam. It checks all my boxes. The vulnerable common man hero. The strong lay characters. Serious stakes. And an intriguing climax.

That scene where Chittibabu gets to learn of his father's humiliation, that was pure mass. I shouldn't have forgotten about that.
4
0
KHAIDI USER REVIEWS
1 - 4 OF 4 COMMENTS
POSITIVE  |  NEGATIVE |  NEWEST  |  OLDEST  |  MOST HELPFUL  |  LEAST HELPFUL
rahulsachinsourav123 on 5th Nov 2019, 9:55am | Permalink
No songs, no heroines, No comedians, no hifi locales and sight seeing of Europe or US. Yet a product with length of 2.5 hours which doesn't lose your attention for a min. Kudos to Kanagaraj. And thanks Josh for your tip on this directors earlier movie. What a brilliant product that one as well. Really Tamil industry is blessed with quite a few young, risk taking film makers coming up with innovative ideas and film making. Big thumbs up to maker here.

I always felt Karthi is very underrated after seeing his nuanced performances in Ooopiri, Madras, Khaki, Paruthiveeran, Yuganiki Okkadu. Hope he comes out of shadow of his superstar brother and good movie makers pays much more attention, time & money in him. Yes he too made some crappy movies, but given good story, script and director, he just kills it and literally un-matchable.
MAA on 2nd Nov 2019, 2:31pm | Permalink
Is this inspired by ConAir????
Josh on 2nd Nov 2019, 8:34pm | Permalink
Could be. Also, my college guide says he saw a film where a convict on parole guards a small town police station surrounded by thugs who want to break in. That sounds really similar, too.
Rudy Guiliani on 28th Oct 2019, 8:45am | Permalink
Mr.JOSH
Another difference between KHAIDI and KHAIDI no150 is that KHAIDI is directed by a good young Tamil director while 150 was directed by a horrible overrated talentless one
Josh on 28th Oct 2019, 6:28pm | Permalink
True. But is there young directing talent in Telugu who'll make a film like this? And would they be encouraged?
Bcr on 28th Oct 2019, 8:50pm | Permalink
1. There are young talented directors in TFI
2. They won't be encouraged as our most of our big heroes and most of our audience need romance action sentiment comedy preachy messages skin show everything condensed in a 2 hour movie.
It is like one of those golden toilets rich sheikh's have...even though it's glossy and shiny and expensive on the outside.look in to it and you will find only shit
Josh on 28th Oct 2019, 11:12pm | Permalink
That's a killer line! :D
Josh on 27th Oct 2019, 5:28pm | Permalink
My bad. I shouldn't have forgotten about Rangasthalam. It checks all my boxes. The vulnerable common man hero. The strong lay characters. Serious stakes. And an intriguing climax.

ADVERTISEMENT
This page was tagged for
darbar movie review fullhyd
khaidimovieinsecunderabad
khaidi movie review
Khaidi telugu movie
Khaidi reviews
Follow @fullhyderabad
Follow fullhyd.com on
About Hyderabad
The Hyderabad Community
Improve fullhyd.com
More
Our Other Local Guides
Our other sites
© Copyright 1999-2009 LRR Technologies (Hyderabad), Pvt Ltd. All rights reserved. fullhyd, fullhyderabad, Welcome To The Neighbourhood are trademarks of LRR Technologies (Hyderabad) Pvt Ltd. The textual, graphic, audio and audiovisual material in this site is protected by copyright law. You may not copy, distribute, or use this material except as necessary for your personal, non-commercial use. Any trademarks are the properties of their respective owners. More on Hyderabad, India. Jobs in Hyderabad.