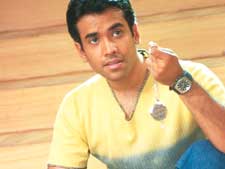 The film, a remake of the Telugu hit Manasantha Nuvve, opens with Karan and Pinky, two overweight kids who are shown to be in love even before they learn the art of running gracefully. The girl's richie rich father of course does not approve, and one tight thwack later, the tubby pair is separated as the girl's family moves out of town. Before parting, however, the lovers exchange as souvenirs an idol and a timepiece, the latter emitting music that can be heard 63.428 light years away. 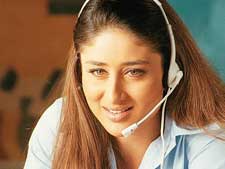 The scene then jumps to a time long enough for Kareena to graduate from Oxford (ahem!), never mind even if she unabashedly croons "Mein solah baras ki". And if you belong to the kind of IQ group that this film is targeting, you'll probably even make out that Kareena Kapoor is perhaps that little girl of the previous scenes, especially since she keeps saying so.

The boy meanwhile miraculously becomes Tusshar Kapoor! And keeping by Bollywood's illustrious history, is an "anaath" adopted by Kader Khan, who lives in a plush house but whose only mode of travel is still a quaint car mostly seen in automobile books of the late 1940s. 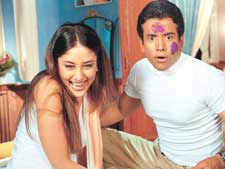 Kader Khan owns a music store that is run by our hero Tushaar Kapoor, a dude who makes everybody around him move in circles. This includes Kareena Kapoor and another female interest whose provocative clothes promptly fall for our confused-at-all-times hero, who in turn spends his time losing and finding the time piece given to him by his 'bachpan ka pyar' (yawn).

Now Kareena Kapoor was all the while abroad mein, and upon landing in India she begins her search by publishing her Amar Prem Katha (!!) in a magazine which is read by every soul in the galaxy except our hero. How she manages to find her one true love and gets the idiot to do the same forms the rest of the story, by which time you've figured out why it's c/c0 in the denominator of the relativity equation and not c0/c even though both become 1 when c becomes c0. 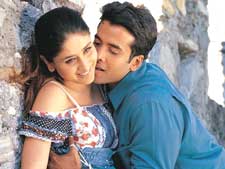 The end incidentally deserves a special mention since our hero is declared dead and yet his eyelids fly open on the arrival of his ladylove and he gets up to embrace her, so what if he's on an operating table with a bullet in his chest. There are some things even Einstein can't explain. On the other hand, there's nothing Bollywood can't.

ADVERTISEMENT
This page was tagged for
jeena sirf merre liye 2 movie in hindi 3gp
jeena sirf mere liye mubi mp3
jina sirf mere liye film
Jeena Sirf Mere Liye Hindi cinema
jeena sirf mere liye review
Follow @fullhyderabad
Follow fullhyd.com on
About Hyderabad
The Hyderabad Community
Improve fullhyd.com
More
Our Other Local Guides
Our other sites
© Copyright 1999-2009 LRR Technologies (Hyderabad), Pvt Ltd. All rights reserved. fullhyd, fullhyderabad, Welcome To The Neighbourhood are trademarks of LRR Technologies (Hyderabad) Pvt Ltd. The textual, graphic, audio and audiovisual material in this site is protected by copyright law. You may not copy, distribute, or use this material except as necessary for your personal, non-commercial use. Any trademarks are the properties of their respective owners. More on Hyderabad, India. Jobs in Hyderabad.