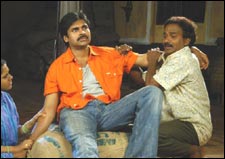 EDITOR RATING
5.0
Performances
Script
Music/Soundtrack
Visuals
NA
NA
NA
NA
Suggestions
Can watch again
NA
Good for kids
NA
Good for dates
NA
Wait for OTT
NA
The most entertaining part of watching Annavaram is the Desamuduru trailer in the interval. Now there is a movie to watch out for. For the benefit of those who came in late, Allu Arjun is one heck of an actor. Then there’s Puri Jagannath as helmer. In a season of disappointments, it appears like a silver lining.

Annavaram appears rather pointless - the first half and the second half are completely disconnected, with no strong binding theme. It almost looks like a decision to change the plot midway as the film was being made. Combine it with poor comedy, no romance and excessive gore, and you have yet another film that just makes up the numbers.

Annavaram (Pavan Kalyan) lives in a village with his sister Varam (Sandhya), who he dotes on. He gets her married to a Hyderabad-based groom (Siva Balaji), and on one visit there with his close friend Narasimha (Venu Madhav), the latter is killed in by a bunch of goons headed by Ganga (Lal), when he tries to save the life of a man they are about to kill in public.

The second half then has Annavaram taking revenge for Narasimha’s death, by wiping out all the goons in Hyderabad single-handedly. Pretty similar to Rakhi that released last week, but Rakhi had a uniform theme. There is also a romance thread with Aishwarya (Asin), which you’ll miss if you are not attentive.

The first half of Annavaram doesn’t have a single fight, and is completely senti - the love of Annavaram for his sister. The second half doesn’t have a single scene with the brother and sister together, and is completely gore - limbs getting chopped off, rivers of blood, 21 deaths in one fight… you get the idea. This is one of the problems - it's not great story-telling, it just looks like 2 formulas for audiences with 2 different kinds of tastes, clearly segregated.

The almost complete lack of mush does its bit, too. All of Pavan Kalyan’s hits have been in films with strong roles for the leading ladies - even if he’s he-man, there’s a vivacious romance with a girl he’s trying to impress. People still remember Khushi as much for Bhumika as for him. This one has purely testestorone in its veins - Asin comes on screen about 30 seconds before every song, and is completely wasted.

Annavaram is not likely to impress the men due to all the senti in the first half with no romance or comedy (whatever jokes are built in are sad, the prime example being Tanikella Bharani in the Police conference room), and the women are likely stay away due to all the violence in the second. Plus, this one clocks 180 minutes.

Pavan Kalyan does what he does. Sandhya as the sister is good - actually everyone else is good, even Telangana Sakuntala in her brief role. Venu Madhav perhaps has a greater acting range than several heroes - he’s quite good, as usual. The songs are all average numbers though the picturization of one with Pavan speaking in Hyderabadi Hindi and Ali in a special appearance is good.

Annavaram is worth a look at if you really need to watch a film - there aren’t too many good ones in Telugu out there this holiday season.
Share. Save. Connect.
Tweet
ANNAVARAM SNAPSHOT

Of late, my theory of how many a telugu film is conceived is being repeatedly proved....
It goes like this... A really rich guy who has made lot of money( legally and illegally) gets a thought... He wants to make a movie. He approaches a director, who btw has mastered the art of production line film-making, to make a film for him. The director accepts and starts making one...
And, we are left wondering why isn't there a script in the movie :)

Please avoid watchin it. Its better to spend time staring at a blank wall, you may just get that next big idea :)

ADVERTISEMENT
This page was tagged for
annavaram telugu full movie
Annavaram cinema Telugu movie downloading audio full movie
Annavaram film5
Annavaram film
annavaram movie
Follow @fullhyderabad
Follow fullhyd.com on
About Hyderabad
The Hyderabad Community
Improve fullhyd.com
More
Our Other Local Guides
Our other sites
© Copyright 1999-2009 LRR Technologies (Hyderabad), Pvt Ltd. All rights reserved. fullhyd, fullhyderabad, Welcome To The Neighbourhood are trademarks of LRR Technologies (Hyderabad) Pvt Ltd. The textual, graphic, audio and audiovisual material in this site is protected by copyright law. You may not copy, distribute, or use this material except as necessary for your personal, non-commercial use. Any trademarks are the properties of their respective owners. More on Hyderabad, India. Jobs in Hyderabad.