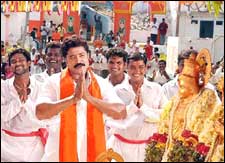 EDITOR RATING
3.0
Performances
Script
Music/Soundtrack
Visuals
NA
NA
NA
NA
Suggestions
Can watch again
NA
Good for kids
NA
Good for dates
NA
Wait for OTT
NA
Hanumanthu is a faithful copy of Subhash Chandra Bose, made one year back with a better starcast, better budget and better director. Even the sensex was doing better then. It still flopped. It is surprising then that Chandra Mahesh, who directed such movies as Indra and Okkadu, should choose to remake that film. Okay, so maybe Chandra Mahesh did not direct Indra and Okkadu, but that doesn't mean he won't, very soon.

There are 3 main differences between Subhash Chandra Bose and Hanumanthu. But since fullhyd.com has a policy of narrating only one main difference per review, let us go straight to the third. While Subhash Chandra Bose’s hero was a city slicker, Hanumanthu’s is a villager who wears dhotis that can be easily pulled off - and regularly are. If your life’s ambition was to see Srihari in those light-blue striped free-size chaddis with nadas holding them, it’s Thanksgiving everyday here. Yoohoo babe!

So Hanumanthu (Srihari) is the big brother of his village, and can beat up all the bad guys by performing certain stunts that you last saw in, well, Hanuman. He stays with his grandmom, who stores him in a safe and dry place, out of the reach of any flashbacks. But flashbacks, like we all know, have a mind of their own. They ring the bell and run away, and you have to answer the door.

Hanumanthu (mark), also played by Srihari but in weird clothes, is a total stud freedom fighter who his village idolizes. He protects the women’s honor, he leads the men from the front, he donates generously, and he listens when others sing. If you are wondering about the last bit, yes, that is important. Not wondering about it, but listening when others sing. If you do that, people will in turn listen when you sing. Otherwise, you have to make an expensive movie to make people listen to your songs.

Hanumanthu (mark) is betrayed by a rival Krishna Murthy (Pradeep Rawat) to the Britishers, and gets killed. It’s always hard to get killed, but Hanumanthu (mark) is made to die in a gruesome way – his head is chopped off, and he has to run a long distance like that to keep the Britishers from killing other villagers. This part can be moving if your IQ falls in the target band that this movie was intended for. Also, if you are still awake – the film goes on for so long, they allow the next show’s audiences into the theater anyway, asking them to stand next to their allotted seats.

Well, it’s not like you are going to watch this movie or anything - it’s one of those that are made so that they can be reviewed. The story is so illogical, it could be passed off as a news bulletin. There is too much gore, and the film plods on for almost 3 hours.

Srihari may be a good actor, but his appeal is too restricted, and he gets only these scripts. The performances are all good, and a bit of comedy in the beginning is enjoyable. The songs make you wonder why they put songs in these movies – do they expect them to be melodious or something?

Don’t get into any theater screening this, unless you are using it as a short-cut.
Share. Save. Connect.
Tweet
HANUMANTHU SNAPSHOT

ADVERTISEMENT
This page was tagged for
hanumanthu movie
hanumanthu
hanumanthu movi
Hanumanthu telugu movie
Hanumanthu reviews
Follow @fullhyderabad
Follow fullhyd.com on
About Hyderabad
The Hyderabad Community
Improve fullhyd.com
More
Our Other Local Guides
Our other sites
© Copyright 1999-2009 LRR Technologies (Hyderabad), Pvt Ltd. All rights reserved. fullhyd, fullhyderabad, Welcome To The Neighbourhood are trademarks of LRR Technologies (Hyderabad) Pvt Ltd. The textual, graphic, audio and audiovisual material in this site is protected by copyright law. You may not copy, distribute, or use this material except as necessary for your personal, non-commercial use. Any trademarks are the properties of their respective owners. More on Hyderabad, India. Jobs in Hyderabad.