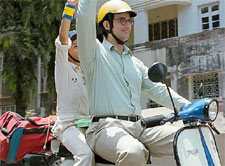 Nupur Barua / fullhyd.com
EDITOR RATING
7.0
Performances
Script
Music/Soundtrack
Visuals
8.0
6.0
5.0
7.0
Suggestions
Can watch again
Yes
Good for kids
Yes
Good for dates
Yes
Wait to rent it
No
India, the land of dreams, comes alive in the latest offering by producer Vidhu Vinod Chopra, whose Munnabhai movies reflected the aspirations of ordinary people. This is director Rajesh Mapuskar's first movie, and if he continues in this vein, he may become another Rajkumar Hirani, and that is something movie-goers will look forward to.

Ferrari Ki Sawaari is all about dreams. There is Kayoze a.k.a. Kayo (Ritvik Sahore), a 12-year-old who dreams of playing cricket at an international level. There is Rustom a.k.a. Rusy (Sharman Joshi), Kayo's father, who has the same dream - giving Kayo access to all the facilities he requires, to become an international cricketer. There is Senior Deboo (Boman Irani), Rusy's father, who has had his dreams broken, and who discourages his son and grandson from dreaming big.

And then there is Pakya (Nilesh Divekar), the bridegroom who wants to reach his wedding venue in a Ferrari. His father, Tatya (Vijay Nikam), a corporator-turned-politician, hires Babbo (Seema Bhargava), a renowned wedding co-ordinator, to design the event.

Babbo's biggest problem is obtaining a Ferrari. There is only one person she knows she can turn to, and that is Rusy, who works at the RTO. Rusy, with his Raja Harischandra ideals, cannot dream of breaking the law, but he manages to "borrow" a red Ferrari without telling the owner. What follows is mayhem, and a comic caper that actually makes you laugh.

The story is simple, if somewhat incredible. Rusy is such an honest fellow that he looks for a traffic cop to pay the fine for unintentionally ignoring a traffic signal. He is na?ve, too - he buys a mobile phone, his first, because he thinks that is the only way he will get calls for loans. He also believes that his son's medals and certificates are enough for the bank to roll over and give him a loan. This naiveté, which worked in a movie like Eeshwar, for example, becomes a little unbelievable after a while, especially since he works in a government office, in Mumbai.

In fact, it is the character of Rusy that gets on to your nerves after a while, and since he is the protagonist, you see him in almost every frame. The movie begins and ends with him, but you wish he were less sugary-sweet. The rest of the film works well as a commentary on dreams, power, corruption and the unanswered question of why a man with a lower salary is denied a loan when it is he who needs it the most.

Sharman Joshi is in his element here, despite overacting a little. He may get on to your nerves once in a while with his silly smiles and innocence, but he manages to carry the film on his shoulders.

Giving him stiff competition is Boman Irani, who plays the grumpy old man. His slouch and disdainful look are consistent, and he proves, once again, his prowess and versatility as an actor.

Ritvik Sahore is not your run-of-the-mill annoying sweet kid, thank God for that. He manages to depict a young boy who knows what luxury is all about but also has a mature understanding of his financial limitations. Watch out for the scene where he wants to lash out at his grandfather.

Stealing the limelight, however, are Pakya and Tatya - Nilesh Divekar and Vijay Nikam. The two actors are masters of their craft, and deliver exactly what they are supposed to, eliciting laughter and merriment. Both are poker-faced most of the time, adding to the comedy. The other comic pair, that of Deepak Shirke and Aakaash Dabhade, is not too bad either.

As with most Vidhu Vinod Chopra movies, the cinematography is fascinating, and almost surreally depicts realistic situations. The authenticity of cultures and locations is maintained, with superior production and costume design, leading you into the multi-faceted city that is Mumbai, without making you cringe. The music is decent, but not chart-busting, in spite of the item number that features a voluptuous Vidya Balan.

Ferrari Ki Sawaari is a feel-good, light movie that runs for almost 3 hours, and though it may become tiring at some point during the climax, it is definitely a film that needs to be watched.
Share. Save. Connect.
Tweet
FERRARI KI SAWARI SNAPSHOT 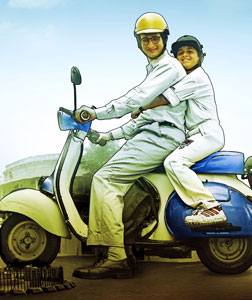 See Ferrari Ki Sawari full details
FERRARI KI SAWARI USER REVIEWS
1 - 2 OF 2 COMMENTS
POSITIVE  |  NEGATIVE |  NEWEST  |  OLDEST  |  MOST HELPFUL  |  LEAST HELPFUL
USER RATING
5.0
2 USERS
Performances
Script
Music/Soundtrack
Visuals
NA
NA
NA
NA
Can watch again - NA
Good for kids - NA
Good for dates - NA
Wait to rent it - NA
Tejas on 21st Jun 2012, 7:35pm | Permalink
Avoid this crap!
RATING
1
Tejas on 21st Jun 2012, 7:34pm | Permalink
Don't watch this movie. Even if you get free tickets, avoid it. This is bull shitty, very simplistic movie. Movies reflect societies and communities in one way or the other. This takes a protagonist who is unbelievable and on top of it, these producers, director makes him some kinda brave father who steals a car. Just avoid this. I can understand why the VVC camp came up with such a shoddy story because they don't have any source material to work on like '3 Idiots'. Well, one has to pay for the past karma of cleverly camouflaging somebody's 3 idiots's while just escaping with a line of rolling credits in the end of that movie for the creator of '3 Idiots'.

Bereft of story material like 3 Idiots, these VVC camp came up with such shitty piece of foolhardy stuff called 'ferrari ki safari'.

ADVERTISEMENT
This page was tagged for
Ferrari Ki Sawari hindi movie
Ferrari Ki Sawari reviews
release date
Sharman Joshi, Boman Irani
theatres list
Follow @fullhyderabad
Follow fullhyd.com on
About Hyderabad
The Hyderabad Community
Improve fullhyd.com
More
Our Other Local Guides
Our other sites
© Copyright 1999-2009 LRR Technologies (Hyderabad), Pvt Ltd. All rights reserved. fullhyd, fullhyderabad, Welcome To The Neighbourhood are trademarks of LRR Technologies (Hyderabad) Pvt Ltd. The textual, graphic, audio and audiovisual material in this site is protected by copyright law. You may not copy, distribute, or use this material except as necessary for your personal, non-commercial use. Any trademarks are the properties of their respective owners. More on Hyderabad, India. Jobs in Hyderabad.