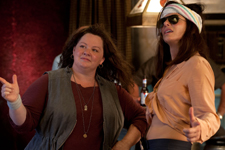 Or... what's that, you thought cop-buddy movies were only restricted to a Nick Frost - Simon Pegg coupling or to be more mainstream, a Jonah Hill - Channing Tatum bromance?

Or, wait again, what else was that? Women can't swear lustily, and make profanities sound even more profane? Well, taking a leaf out of Detective Shannon Mullins' book - "Why don't you take your effing opinion and shove it up your (where-the-sun-don't-shine) all the way to your pocket?"

Yeah, this is probably why The Heat ended up being R-rated. It's been a while since we had heard such gusty, uninhibited, and very specifically worded swearing.

As it is with the premise of every cop-buddy movie, the story here is barely there, and whatever of it IS there seems to be there as an excuse for Mullins (Melissa McCarthy), the in-your-face...and-your-family's-face..and-probably-in-your-dog's-face too... Boston detective to break out into a string of the choicest cuss words in her kitty. And believe us, there's LOADS more where that comes from.

Starting with the story (which, if you are smart, you won't go to watch this movie for) is the usual tale of the strait-laced, so-uptight-I-probably-have-a-whalebone-corset-all-over-my-body cop being teamed up with the slack-jawed, slovenly, I-eat-prissy-princesses-like-you-for-appetiser cop. In The Heat, FBI agent Sarah Ashburn (Sandra Bullock) is the first kind, and Boston PD detective Shannon Mullins (Melissa McCarthy) is the second kind.

To throw in a couple of bad guys, purely so that Ashburn can, in manic fits of systematic OCD, play the good cop/interrogator, and Mullins can, in an equally manic manner, throw the phonebook at them, seems to be the only plot device in the movie.

The ladies have to catch a couple of druglords, a couple of pimps, and the one mysterious kingpin-to-rule-them-all. There, that's as much as the other characters have to do in the movie (in fact, we think that we might have cranked their presence up by a few notches). Oh, and there's a German Shepherd who seems to share a love-hate relationship with Detective Ashburn.

This oft-repeated story - such a common trope that even Bollywood has tired of copying it (Main Khiladi Tu Anadi, Bade Miyaan Chote Miyaan... by all means, feel free to complete the list) - does not find a stronghold in the technical rigging of the movie, either. The frames have the (same old, same old) fuzz-movie feel to them.

The cinematography is nothing to talk about. The action scenes mainly consist of Mullins whipping her gun out at the slightest provocation - "Oh, so you're telling me that I can't make a phone call in the hospital" or "Oh, so you think you can solicit prostitution in my area", or "Oh, you think you can wear such a boring old jacket with such supreme arrogance", yakitty, yakitty, yak.

But, yeah, there ARE some memorable (solely by virtue of invoking memories of trend-setting movies in this genre) moments that stir the inner, adolescent fanboy/girl into whoo-ing the lead pair on. The part where they are holstering all those guns and tying that symbolic bandana over the head, and putting on those Ray Bans (in true Bad Boys - Lethal Weapon - Hot Fuzz - Fast And Furious style) is the stuff that action fans live for.

Sandra Bullock is her old self - an endearing mix of grace, clumsiness, an almost Victorian era uppitiness and poise. Ashburn is hated by her male peers for being a competitive know-it-all (and you thought that Benedict Cumberbatch's Sherlock was cocky and arrogant). But, boy, does she look hot when she dons on the shorts to get nearer to a drug dealer in a nightclub! This is one Oscar winner that knows how to boogie.

Coming to Melissa McCarthy, her brand of over-the-top-ness is nothing new. Here though, she practises restraint where its needed (believe us, she does). And she makes being overweight look so EASY, and so un-self-conscious.

A movie like this can only rely on the chemistry between the protagonists, and don't harbour any doubts as to whether it scores there or not. It D.O.E.S. We can't actually think of any other two actresses who would have snuggled into these roles as comfortably as Bullock and McCarthy do.

They make jaded misogynist-misandrist-racist jokes sound fun. They make stake-outs look fun. They even make spandex look like fun (nopes, not giving out the spoiler on that joke).

They get drunk, they swear, they fight each other, they threaten to shoot male genitalia off, they even get to have a car chase. Indeed, these moments of "womance" (yeah, people, that's our answer to "bromance"!) are heavily reminscent of the movie's director Paul Feig's earlier venture, The Bridesmaids. You don't see these two cops as girls-playing-with-boys'-toys, but as grown-up, gun-wielding female police officers. The feminists of the world thank director Paul Feig and writer Katie Dippold for that.

Watch this movie for the sake of Sandra Bullock and Melissa McCarthy's wonderful "womance". No, seriously, these women earn it, or (in Mullins case) bully it out of you. But, oh, do we like getting bullied or what!
Share. Save. Connect.
Tweet
THE HEAT SNAPSHOT 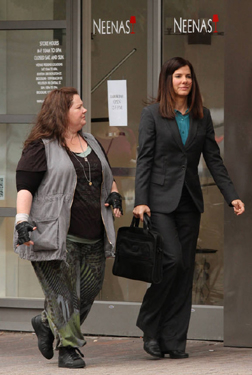 ADVERTISEMENT
This page was tagged for
The Heat english movie
The Heat reviews
release date
Sandra Bullock, Melissa McCarthy
theatres list
Follow @fullhyderabad
Follow fullhyd.com on
About Hyderabad
The Hyderabad Community
Improve fullhyd.com
More
Our Other Local Guides
Our other sites
© Copyright 1999-2009 LRR Technologies (Hyderabad), Pvt Ltd. All rights reserved. fullhyd, fullhyderabad, Welcome To The Neighbourhood are trademarks of LRR Technologies (Hyderabad) Pvt Ltd. The textual, graphic, audio and audiovisual material in this site is protected by copyright law. You may not copy, distribute, or use this material except as necessary for your personal, non-commercial use. Any trademarks are the properties of their respective owners. More on Hyderabad, India. Jobs in Hyderabad.