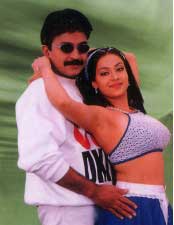 EDITOR RATING
6.0
Performances
Script
Music/Soundtrack
Visuals
NA
NA
NA
NA
Suggestions
Can watch again
NA
Good for kids
NA
Good for dates
NA
Wait for OTT
NA
With his action films bombing badly at the box office, Rajashekar has turned to sentimental dramas to revive his career. And it doesn't seem to be a bad decision.

Rajashekar plays a zamindar, known for his benevolence in the nearby 40-50 villages. Living with his grandmother Manorama in his native village Dosakayalapalli, he is the epitome of humility. His other pastime is clashing with the crooked ex-president of the village, Kota Srinivasa Rao. But these clashes only serve the comic purposes, because there isn't any real animosity between them.

Hailing from the same village, Laya, who is a first rank holder in EAMCET, and who can't continue her studies further because of the grinding poverty, is naturally one of the beneficiaries of his riches. And when she writes to him thanking him for all his generosity, his friends interpret the act as a message of love.

The convinced Rajashekar starts building love castles in the air, and every incident that happens between them buttresses his belief. After the interval, five years roll in one stroke, by which time she becomes a doctor and he gets a kind of corporate hospital constructed for her in his native village. Ensuring that Laya is safely ensconced in her profession, he tells her about his love for her, only to be told that she has always perceived him as a living God, and not as a lover. From here the fun part is over and the sob story takes over.

For Mutyala Subbaiah it might be the regular stuff, but for Rajashekar it is definitely not a bad film. There is a whole load of comedians, and they enact their roles without much fanfare. But they don't bore you either. Then there is Asha Saini who intends to marry Rajashekar, but ends up getting only a song and that too in skimpy clothes. Kota Srinivasa Rao is his usual self, and so are the others. All said and done, this is worth going to the theater, if you have the time to spare and don't have great expectations.

ADVERTISEMENT
This page was tagged for
Manasunna Maaraaju telugu movie
Manasunna Maaraaju reviews
release date
Rajashekar, Laya
theatres list
Follow @fullhyderabad
Follow fullhyd.com on
About Hyderabad
The Hyderabad Community
Improve fullhyd.com
More
Our Other Local Guides
Our other sites
© Copyright 1999-2009 LRR Technologies (Hyderabad), Pvt Ltd. All rights reserved. fullhyd, fullhyderabad, Welcome To The Neighbourhood are trademarks of LRR Technologies (Hyderabad) Pvt Ltd. The textual, graphic, audio and audiovisual material in this site is protected by copyright law. You may not copy, distribute, or use this material except as necessary for your personal, non-commercial use. Any trademarks are the properties of their respective owners. More on Hyderabad, India. Jobs in Hyderabad.