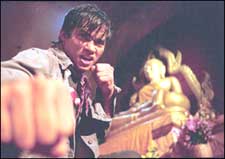 Priyanka Pulla / fullhyd.com
EDITOR RATING
7.0
Performances
Script
Music/Soundtrack
Visuals
NA
NA
NA
NA
Suggestions
Can watch again
NA
Good for kids
NA
Good for dates
NA
Wait for OTT
NA
Tom Yum Goong easily has some of the best action scenes, rivalling those of the Bruce Lee and Jackie Chan schticks. There are about 6-7 of them - the police chase, the restaurant storm-in, the monastery fight, the bone-snapping at Madame Rose's den and so forth. The purported motive that ties it all together? The recovery of the pet adult and baby elephants of Kham (Tony Jaa) that have been kidnapped by an Australian gang to fulfill some gruesome manifesto like turning them into elephant soup.

But we won't make absolutely any comment on the plot because it is ludicruous to imagine that where such superhuman brawls are possible, a story ought to be coherent and realistic. Choose to watch Tom Yum Goong, and enter into a supernal firmament. For those who swear by Tony Jaa (as all of Hyderabad does, if the success of his last film is any indicator), if you tried any pesky questioning and analysis while they were glued to the screen, you would be nothing but a grouchy party-pooper, the innapropriate egghead at an inner-circle gala. The franker of the lot would probably bounce you out.

So you got the hang of the story already. Kham lives in Thailand, growing amongst elephants which are considered members of the families in his small village. When a motley international gang of crooks kidnap his elephants for Madam Rose (Xing Jing), their transsexual mistress who owns a business empire and a restaurant called Tom Yum Goong in Australia, he follows on trail.

Inspector Mark (Pechtai Wongkamlao) is a Thai in Australia who makes trouble for him first but becomes friends soon. Meanwhile, between a struggle to inherit the empire from Rose, a multicolored group of men zero in on Kham who is creating trouble by storming into the most inappropriate places and screaming "Where is my elephant" in an accent that would make any self-respecting anglophile lie down in the path of a rampaging elephant in heat.

While the fights are brilliant, the accents are the bedrock. And it seems like Thai people are spread so thickly over Australia that if bad accents could kill, Australia would face a wipe-out more complete than the Permian extinction.

The music is superb techno, and some of the fights are choreographed so well to it, you will have an absolutely rollicking time even if action doesn't kick you. There is a Kill Bill reminiscent scene in the second part of the movie, where Kham beats up an impossibly large bunch of tuxedoed men, and his modus operandi is to break their bones by bending their limbs at unnatural angles across his body. The scene goes on for ever, and ends about 5 minutes too late, but it is fun nevertheless.

A fight in the monastery is choreographed in water, with fire, Buddha statues, drums and bells on the set. Jaa uses them as props reminding one of the brilliant Jackie Chan, and he is clearly standing on the shoulders of giants as he goes many steps ahead with his whacky feats. The fights are pure music, with strikes and counter-strikes positioned with indisputable logic.

One also realises that unless the fanfare accompanies each punch and kick, it would not be possible to ward it off with that aplomb. Style begets style. If one player is ordinary, if his aggression is routine, the defense too will be ordinary. You realise why these fights never happen on the street even though Tony Jaa does his own stunts. Unless a guy aimed a biff at you with so much affectation, you probably wouldn't even have been able to block it.

But let's not play killjoys again and analyse Jaa's Muay Thai Boran or Tae Kwondu. The guy's a whiz-bang, and we hope to see many more such insanely enjoyable flicks in the future. Like we said, he stands on the shoulders of giants and seems brilliantly worthy of it.
Share. Save. Connect.
Tweet
TOM YUM GOONG SNAPSHOT

ADVERTISEMENT
This page was tagged for
Tom Yum Goong english movie
Tom Yum Goong reviews
release date
Tony Jaa (Phanom Yeerum), Petchtai Wongkamlao
theatres list
Follow @fullhyderabad
Follow fullhyd.com on
About Hyderabad
The Hyderabad Community
Improve fullhyd.com
More
Our Other Local Guides
Our other sites
© Copyright 1999-2009 LRR Technologies (Hyderabad), Pvt Ltd. All rights reserved. fullhyd, fullhyderabad, Welcome To The Neighbourhood are trademarks of LRR Technologies (Hyderabad) Pvt Ltd. The textual, graphic, audio and audiovisual material in this site is protected by copyright law. You may not copy, distribute, or use this material except as necessary for your personal, non-commercial use. Any trademarks are the properties of their respective owners. More on Hyderabad, India. Jobs in Hyderabad.