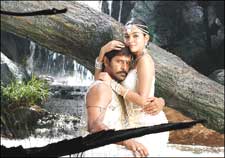 EDITOR RATING
6.0
Performances
Script
Music/Soundtrack
Visuals
NA
NA
NA
NA
Suggestions
Can watch again
NA
Good for kids
NA
Good for dates
NA
Wait to rent it
NA
Like Julia Roberts once said, if you are watching a dubbed Tamil movie first-day-first-show on Diwali, then you're either doing it for a living or you're a complete d… oh, let's forget it. Besides, for all we know Julia Roberts may not have said it – we all know how newspapers can completely misquote anyone, or at least say things that any reader can completely misquote. That's why we at fullhyd.com don't read newspapers. These days you can't trust even the comics page.

Mazaa is nothing like the kind of dubbed Tamil films that actually become hits here – either with sleek trendy visuals and hit music or with Rajnikanth in them. It is a tale set in rural TN with a semi-literate hero who can beat up all the local landlord's goons. Yes, if the '80s films of Chiranjeevi came to mind, with Rao Gopala Rao and Allu Rama Lingaiah playing villains and a voni-clad Vijayashanti playing daughter of the village oppressor, then bingo.

If you want to watch those kinds of films in 2005 in a theater, paying good money, then Mazaa is all yours. Prasad (Vikram) and Adi (Pasupati) are brothers who are into burglary with their father Govinda (Manivannan), but they all decide to turn honest serendipitously (or whatever is a hep word to use for "suddenly"). They buy a lorry and move out of their village. On the first night, Adi steals food from a house on the way, but it turns out to be heavily poisoned and their father has to be hospitalized.

Anyway, we at fullhyd.com are making a start – this page will now turn up for that string above (since it has it), so please post all information you have about such errant houses you have encountered, in the comments to this review. Please also leave your name and mobile number.

So anyway, completely lacking in direction as to how to handle such a situation due to no precedents or documentation, Prasad lands up at the house again and is about to beat the crap out of its owner, when he realizes that the latter had actually kept that food aside to feed his kids and then himself.

Now unless you have been specifically trained to respond to such situations, it's hard to come up with an appropriate statement, and the best that Prasad can manage is, sorry, can they replace the food with all the ingredients. Thankfully his father intervenes, and tells the owner that suicide is no escape from life, without realizing what a stupid statement that is – if suicide isn't an escape from life, what else is it? But we need to get into the spirit of things.

They find out that the village is ruled by a Narasimha Rayudu, who is about to throw these people out of the house due to a debt that they haven't repaid for a long time. Needless to say, Prasad takes on Rayudu full throttle, and in the process wins the love of his daughter Lakshmi (Asin). Rayudu also becomes okay with this since he likes Prasad's machismo. But then a new villian emerges.

The film is time-pass, with plenty of light-hearted stuff and good performances (all performers are acclaimed Tamil actors, and Vikram is of course a National Award winner), but it's hard to see the urban Hyderabad audiences, increasingly used to glitz and style in movies, accepting a rural theme from another land with its own customs and way of dressing. Plus, the music and the cinematography are just average (even if the locations are well-chosen), primarily considering that those have to make all the difference for a dubbed Tamil film.

However, Mazaa doesn't bore you one minute, and, with dubbing by Brahmanandam and Kota Srinivasa Rao for key characters, is fully worth your time.
Share. Save. Connect.
Tweet
MAZAA SNAPSHOT

ADVERTISEMENT
This page was tagged for
Mazaa telugu movie
Mazaa reviews
release date
Vikram, Asin
theatres list
Follow @fullhyderabad
Follow fullhyd.com on
About Hyderabad
The Hyderabad Community
Improve fullhyd.com
More
Our Other Local Guides
Our other sites
© Copyright 1999-2009 LRR Technologies (Hyderabad), Pvt Ltd. All rights reserved. fullhyd, fullhyderabad, Welcome To The Neighbourhood are trademarks of LRR Technologies (Hyderabad) Pvt Ltd. The textual, graphic, audio and audiovisual material in this site is protected by copyright law. You may not copy, distribute, or use this material except as necessary for your personal, non-commercial use. Any trademarks are the properties of their respective owners. More on Hyderabad, India. Jobs in Hyderabad.