The Spy Who Loved Me Review 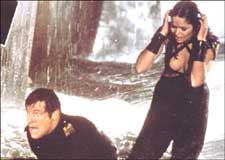 Charisma Murari / fullhyd.com
EDITOR RATING
7.0
Performances
Script
Music/Soundtrack
Visuals
NA
NA
NA
NA
Suggestions
Can watch again
NA
Good for kids
NA
Good for dates
NA
Wait to rent it
NA
The glad-eyed, smooth-talking, gizmo-wielding super spy with the licence to kill is back. And his life continues to be excruciatingly demanding - just think of the sheer number of beds he has to hop in and out of! As, Roger Moore (Bond. James Bond.) puts it in this one, "Got to keep the British end up".

Indeed. And when his Casio receives a facsimile transmission that looks, ever so slightly, reminiscent of a Braille tag, you don’t stop to question it. Naa Uh! After all, he is the 007, and a 007's gotta do what a 007's gotta do!

And so, from the ski-slopes of Austria, we must venture to the depths of the ocean – to recover a stolen nuclear-submarine, and a micro-film containing a stealth submarine tracking system developed by the evil, multi-gazillionaire, Stromberg.

We meet Stromberg’s trusted aides in Fat Guy With Bad Teeth and Tall Guy With Worse Teeth. And between bad and worse, worse is worse. Really, Wren And Martin says that. Anyway, Mr. Bad Teeth is promptly disposed of, immediately after we reach Egypt, and Mr. Worse Teeth hangs around because, well, he just does.

Bond meets Triple X (Barbara Bach) of the KGB, and together, as rivals (an oxymoron!), they pursue Tall Guy to recover the film. And to retrieve the micro-film.

As Triple X makes off with the film, you find yourself saying, "You go girl." Even Bond is saying touché till he learns that the mission is a collaborative between the KGB and Britain. Because that is possible!

The search takes the sleuths to Stromberg's oyster-spacecraft hybrid under-water sanctuary, and from there to the stolen sub. Bond learns that Stromberg wants to nuke a few cities of the western world, but of course, with Bond on the case, he doesn’t stand a chance!

The Spy Who Loved Me has all the Bond-flick elements. Cool strato is used. What else? Cool apparatus are aplenty. What else? The cities are saved. What else? Ah! The damsel in distress part hasn't been covered yet.

So, even as the recovered submarine locks in on the oyster-spacecraft hybrid, Bond must go save Triple X. And, conforming to all laws of moviedom, the cool structure must be destroyed. Save that popcorn, the movie is not over yet!

The Spy Who Loved me is a Bond-relic. The art of slick movie-making has come a long way since 1977, and that has to be kept in perspective while watching this one. It moves a little slow, but you won’t find yourself shifting in your seat. And Bond is still walking the walk and talking the talk. His suits still don’t show half a crease, and his hair gel can still withstand the gushing winds.

ADVERTISEMENT
This page was tagged for
The Spy Who Loved Me english movie
The Spy Who Loved Me reviews
release date
Roger Moore, Barbara Bach
theatres list
Follow @fullhyderabad
Follow fullhyd.com on
About Hyderabad
The Hyderabad Community
Improve fullhyd.com
More
Our Other Local Guides
Our other sites
© Copyright 1999-2009 LRR Technologies (Hyderabad), Pvt Ltd. All rights reserved. fullhyd, fullhyderabad, Welcome To The Neighbourhood are trademarks of LRR Technologies (Hyderabad) Pvt Ltd. The textual, graphic, audio and audiovisual material in this site is protected by copyright law. You may not copy, distribute, or use this material except as necessary for your personal, non-commercial use. Any trademarks are the properties of their respective owners. More on Hyderabad, India. Jobs in Hyderabad.