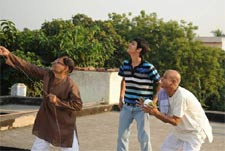 Nupur Barua / fullhyd.com
EDITOR RATING
4.0
Performances
Script
Music/Soundtrack
Visuals
5.0
4.0
3.0
4.0
Suggestions
Can watch again
No
Good for kids
No
Good for dates
Yes
Wait to rent it
Yes
In her Director's Note, Gitanjali Sinha says, "With a constant increment in the level of peer and parental pressure to perform well, the youth are falling prey to all sorts of psychological disorders... Their deep-rooted loneliness can be sensed in their overall personality." Which is why she made this film, Yeh Khula Aasmaan - to address this alienation, and the connection a lonely youngster can have with an equally desolate grandparent. The villains, therefore, are the parents of the child, who not only abandon their offspring in the pursuit of ambition, but also forget their own parents.

Avinash (Raj Tandon) has just discovered that he has failed his IIT entrance examination. The teenager, who lives alone in Mumbai, tries to reach out to his parents (Yashpal Sharma and Manjusha Godse) in London, but unsurprisingly, the father has important business meetings, and the mother has to meditate. Depressed, Avinash takes a train to Bhagalpur, to meet his grandfather Gulab (Raghuveer Yadav), after 10 years.

While the old man is pleased to see him, it transpires that a decade ago, Avinash's parents left their hometown, taking with them their 7-year-old son, in search of greener pastures. They never came back, leaving Gulab miserable. Avinash connects with his grandfather, and also reunites with his nursery friend, Govinda (Nitin Kerur), and Gulab's Man Friday, Dina Kaka (Kishor Nadalskar). He meets with Gulab's best friend's granddaughter, Muskaan (Anya Anand), and a young romance blossoms.

Bhagalpur is known for its annual kite-flying championship, and Javed (Gulshan Pandey) is hopeful that his son Salim (Aditya Sidhu) will beat the record that Gulab set in 1959, when he defeated Javed's father Mirza. Given Salim's obnoxious behaviour, and also to distract himself from the low marks he scored at his higher secondary finals, Avinash decides to learn the art of kite-flying from his grandfather, and to participate in the competition.

What could have been a touching and sensitive story falls flat on its face due to bad scripting, dreadful dialogues and poor acting. The plot moves from one issue to the other, while trying to incorporate all of them under the larger themes of isolation and how to recover from loneliness.

After the first 15 minutes or so, once the setting is established, the movie becomes so predictable that you wonder why you did not walk out by the time the boy enrolls in kite flying lessons. Apparently, the 50-year-old feud between the two families is so serious that one kite-flying championship is enough to settle scores. Towards the end, the tacky dialogues make a mockery out of the entire movie, and leave you with a bitter taste in your mouth.

The metaphor of a kite representing relationships is rather forced. And if you think that this is a movie on a sport, or even small-town India, then you can think again.

Raghuveer Yadav becomes a caricature of himself as the movie progresses. He is stuck in a role that gives him little to do but make noises and faces, and these are not funny. He even lends his voice to one song, and that is the only time he looks like he is enjoying himself.

Anya Anand as the girl next door is hollow to the point of boring. She seems unsure of what she needs to do, and the director has to be blamed for that. The young girl tries her best, but she is lost.

Yashpal Sharma and Manjusha Godse have the worst lines in the movie, and therefore, are the worst actors. They cannot be convincing as NRIs, and actually, they do not really try.

The only sincere actor in the film is the protagonist, Raj Tandon. He is raw, and obviously the director has not exploited his full potential, but he can evoke empathy in the audience with his vulnerability and angst. He would have been brilliant for a movie like Udaan.

The music is, at best, forgettable. The visuals and production design are rather amateur, and weird camera angles do not help. The grandfather's house has a lot of character, though, but the makers did not have the foresight to use that to their advantage.

Yeh Khula Aasmaan has been lauded with many honours and mentions, and that may have to do largely with the fact that it is a tribute to grandparents across the world. The director needs to make it a better edited film, for it to become a commercial success, otherwise one can always revisit Kader Khan starrers of the 1980s, where the valiant hero defied his parents to bring back some dignity in the lives of his grandparents.
Share. Save. Connect.
Tweet
YEH KHULA AASMAN SNAPSHOT 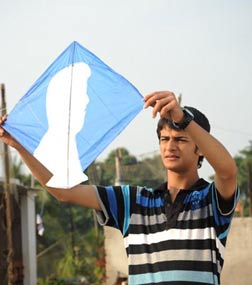 ADVERTISEMENT
This page was tagged for
Yeh Khula Aasman hindi movie
Yeh Khula Aasman reviews
release date
Raghuveer Yadav, Yashpal Sharma
theatres list
Follow @fullhyderabad
Follow fullhyd.com on
About Hyderabad
The Hyderabad Community
Improve fullhyd.com
More
Our Other Local Guides
Our other sites
© Copyright 1999-2009 LRR Technologies (Hyderabad), Pvt Ltd. All rights reserved. fullhyd, fullhyderabad, Welcome To The Neighbourhood are trademarks of LRR Technologies (Hyderabad) Pvt Ltd. The textual, graphic, audio and audiovisual material in this site is protected by copyright law. You may not copy, distribute, or use this material except as necessary for your personal, non-commercial use. Any trademarks are the properties of their respective owners. More on Hyderabad, India. Jobs in Hyderabad.