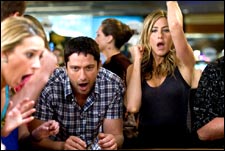 Samrat Sharma / fullhyd.com
EDITOR RATING
3.5
Performances
Script
Music/Soundtrack
Visuals
7.5
3.5
5.0
5.0
Suggestions
Can watch again
No
Good for kids
No
Good for dates
No
Wait for OTT
Yes
It has arrived - this is the age of the anti Hugh Grant. The need for a sensitive lead in romantic comedies has given way to the need of an ultra-macho lead who likes to rough up his women and prove that what they need more than anything is a bit of a spanking.

Hollywood realizes correctly that romantic comedies that have something for the guys will probably bring in more money than the ones that don't. It assumes incorrectly though, that having chauvinists as a lead is the way to go.

In all ways worse than the ultra misogynistic The Ugly Truth, The Bounty Hunter stars Gerard Butler as his regular growling, smirking Sunny Deol avatar where the Scot embodies the (supposed) hinterland American macho and slaps his women into submission. He's a man's man once again, proving that being a d**k is a better proposition than being, well, human.

Directed by the guy who made the abysmal Fool's Gold and crewed and supported in cast by television regulars, this is decidedly a low risk venture. The extreme macho bulls**t will probably appeal to the masochistic women and beer-swilling wife-beaters, and the charisma of the leads will carry the rest of us through. At least, that's the thought.

The lack of finesse or any semblance of production value is evident in the pedestrian way the film is shot and mounted. Still, despite the 300 persona, we didn't expect an action blockbuster, so maybe the low rent value isn't something to complain about.

I'd still like to complain about how pedestrian it looks, though. Duncan Jones' Moon was low budget, and looked fantastic. Granted, completely different genres, but it goes to show that with enough imagination and the morals to actually care about what you're making, you can make something special.

This is where the leads come in. While Butler's gruff personality and Aniston's conniving scheming character are both unlikable, the actors do have enough charisma to give random scenes come charm. Maybe I just don't like Butler, but I did think while he was mostly one-note. Aniston still has got what it takes. She is stunning, and charm personified for her screen time.

There is a definite Bird On A Wire vibe that the cast and crew are going for, with nefarious goings-on, random action scenes and zany characters who lovehate each other. While Aniston succeeds in being a smoking Goldie Hawn, though, everything else is just that side of non-ironic to be taken seriously in this day and age.

Ultimately it's the sad script that fails whatever charm the leads can muster up. He is an ex-cop who is now a bounty hunter. She is a journalist who got arrested for assaulting a police officer. When she skips her court date, while working on a case, he is asked to go retrieve her, which, as the ex-husband, fills him with delight.

There is no suspension of disbelief required to see why they hate each other. What is impossible to see is why they finally rejoin. There is no reason why they start liking each other except that they solved a crime together. That is great for Speed, but not for a romantic comedy. The failure of the script to convincingly come to a point where the two leads like each other is, ultimately, the second biggest failing of the film.

It is a cheaply made, badly written story of how a woman needs to be roughed up in order to realize what she has been missing in her life. Almost makes you wistful for those ultra-sensitive male leads.

In the end, you can still decide to go watch this film. Know that we are no longer friends if you like it, though.
Share. Save. Connect.
Tweet
THE BOUNTY HUNTER SNAPSHOT

ADVERTISEMENT
This page was tagged for
The Bounty Hunter english movie
The Bounty Hunter reviews
release date
Jennifer Aniston, Gerard Butler
theatres list
Follow @fullhyderabad
Follow fullhyd.com on
About Hyderabad
The Hyderabad Community
Improve fullhyd.com
More
Our Other Local Guides
Our other sites
© Copyright 1999-2009 LRR Technologies (Hyderabad), Pvt Ltd. All rights reserved. fullhyd, fullhyderabad, Welcome To The Neighbourhood are trademarks of LRR Technologies (Hyderabad) Pvt Ltd. The textual, graphic, audio and audiovisual material in this site is protected by copyright law. You may not copy, distribute, or use this material except as necessary for your personal, non-commercial use. Any trademarks are the properties of their respective owners. More on Hyderabad, India. Jobs in Hyderabad.