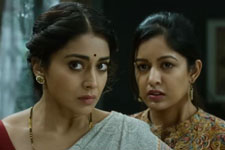 Sai Tulasi Neppali / fullhyd.com
EDITOR RATING
7.5
Performances
Script
Music/Soundtrack
Visuals
8.0
8.0
7.0
7.0
Suggestions
Can watch again
Yes
Good for kids
Yes
Good for dates
Yes
Wait for OTT
No
The past does not stay in the past in Drishyam 2. We last saw Vijay Salgaonkar (Ajay Devgn) outwit Goan police and hide a corpse - proof of his daughter's accidental crime - right under their noses. The body still rots beneath the Pondolem police station, but its specter returns to taunt the Salgaonkars. Vijay must show, once more, the lengths he'll go to protect his wife and kids. Or maybe this time he will finally fold and confess.

Drishyam 2 picks up seven years after Vijay pulled off a cover-up for the ages: Sam, son of ex-DSP Meera Deshmukh, accidentally dies at the hands of Anju, the older Salgaonkar kid, but she goes scot-free. Vijay's wife Nandini (Shriya Saran) and their kids still have the occasional panic attacks over it. But Vijay is unflappable as ever, and is in fact doing quite well. He has expanded his cable network business and begun pumping his newfound wealth into making a movie. But there is a new sheriff in town - Tarun Ahlawat (Akshaye Khanna) - and he won't let Vijay win.

Tarun is in many ways Vijay's intellectual equal - severe and wicked smart. When new inciting evidence turns up, Tarun rallies the old gang, Meera and disgraced cop Gaitonde, to his cause, and they go after the Salgaonkars with renewed ferocity.

Drishyam 2 doesn't mess with the formula that had us gripping the armrests the last time around: criminal or not, every character has a strong motive to be doing what they do. Meera is looking for closure, Gaitonde for revenge, Tarun for justice, and Vijay for peace and quiet. In a very simian way, everyone acts in alignment with their impulses. Who prevails in the end isn't a question of what's right, but who's the smartest and luckiest.

And this makes Drishyam 2 a titillating watch. Our moral compasses go haywire searching for the right person to root for. The "hero" may be an obvious choice for some, but most of us feel like undecided sports fans, flip-flopping to the winning side. What makes it a tight match is that it is a level playing field between the two star players. Vijay is never haughty about his escape, and Tarun never underestimates him. At about the midway point, the game languishes with too much posturing and foreshadowing as Tarun's team tries to heckle the other side into surrendering. But as the final minutes roll in, we are at the edges of our seats prepared for Vijay to notch another win or face a stunning upset. Either way, it is a gripping end.

Ajay Devgn is at his icy best as the intrepid Vijay. You can't quite tell if he's a fearless freak or just a really protective family man. Shriya Saran as Nandini and Ishita Dutta as Anju are close to nervous breakdowns, though. Akshaye Khanna who plays Tarun Ahlawat pushes these women to the edge with veiled threats. Khanna is naturally blessed with what you'd call "kind eyes", but here he makes them shoot lasers.

While the leads tend to display monotonal emotions in keeping with their crusades, the surrounding cast brings the nuance. Sidddharth Bodke shows stunning talent as David Briganza - a man who is at the right place at the right time, the key that unlocks the case. Kamlesh Sawant as the raging Gaitonde urgently needs his own movie. I could watch him threaten a puppy and still find it shamelessly fun.

On a final note, it looks like the Drishyam franchise is not quite ready to let sleeping (or dead) dogs lie. Director Abhishek Pathak teased a part 3 only yesterday. But unless we get a whole new crime, it feels like there is little juice left in this tank. Then again, anybody who ever underestimated Vijay Salgaonkar's ability to astonish has had to eat crow. So I sit in Martin's Coffee Corner with a cup of chai in my hands and an eye on the Pondolem police station across the street, waiting to hear fresh gossip about the town's most infamous family. 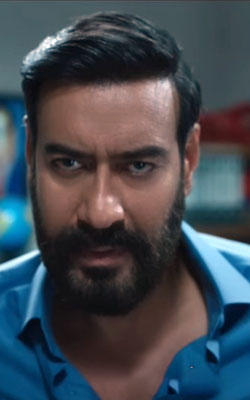 ADVERTISEMENT
This page was tagged for
Drishyam 2 (Hindi) hindi movie
Drishyam 2 (Hindi) reviews
release date
Ajay Devgn, Akshaye Khanna
theatres list
Follow @fullhyderabad
Follow fullhyd.com on
About Hyderabad
The Hyderabad Community
Improve fullhyd.com
More
Our Other Local Guides
Our other sites
© Copyright 1999-2009 LRR Technologies (Hyderabad), Pvt Ltd. All rights reserved. fullhyd, fullhyderabad, Welcome To The Neighbourhood are trademarks of LRR Technologies (Hyderabad) Pvt Ltd. The textual, graphic, audio and audiovisual material in this site is protected by copyright law. You may not copy, distribute, or use this material except as necessary for your personal, non-commercial use. Any trademarks are the properties of their respective owners. More on Hyderabad, India. Jobs in Hyderabad.