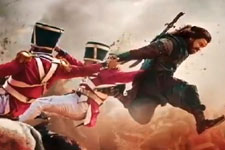 Josh / fullhyd.com
EDITOR RATING
6.0
Performances
Script
Music/Soundtrack
Visuals
7.0
4.0
7.0
7.0
Suggestions
Can watch again
No
Good for kids
No
Good for dates
No
Wait to rent it
Yes
Majjari Narasimha Reddy was a Polygar, one among over sixty Polygars in the districts ceded to the British by the Nizam. The Polygars were like Zamindars who owned some villages and were the contact point of the Nizam for the tax collection of those villages. When the British, the new overlords, implemented the Ryotwari system, wherein the land tiller was directly approached to pay his taxes, the Polygars faced a loss of purpose (and income) and had to eke it out on the pension the British gave them.

Even though the Ryotwari system did away with the middlemen, the peasants were in fact worse off due to excessive and relentless taxation, even in the face of drought. Narasimha Reddy, too, was particularly humiliated when his measly pension of eleven rupees was discontinued because of an inheritance clause. In this context, as the people too came together to oppose the British, he became the figurehead of revolt. (It's a more complicated system with Kattubadi Inams among others, but do you really enjoy a pedantic review?)

With a 5,000-strong force, Narasimha Reddy attacked the treasury of Koyilkuntla, killed a forest ranger and a Tahsildar in various skirmishes, rescued his wife and son from the clutches of the British, and lived many a day in the forests fighting the British with everything he had. But eventually he got brutally executed in front of a crowd of thousands. His head was hung there for thirty years to serve as an example to any potential rebels. Fittingly, though, his example inspired many in the coming years. Including Lakshmibai, the Rani of Jhansi.

This film here, it's about Chiranjeevi.

Chiranjeevi made his day in the sun with his infectious comedic charm, his wondrous flexibility in dance movement, and his relatability to the working class masses. But Sye Raa has no use for his comic talent, because Narasimha Reddy is a serious guy. Nor does the movie utilise his dancing talent, because it's just not that kind of movie. And he's clearly playing a version of a feudal lord - so relatibility with the working class masses can go take a hike.

The film, then, is aimed at the fan. The fan, you'll remember, is willing to forgive and forget anything and everything as long as their star is delivered unto them. And Sye Raa delivers the star. He is actively mythologised. He is a ready deliverer of justice (sometimes too ready - he's always around the corner to save the day). He jumps, swerves, and kills with cutting edge world class wire-fu stunts. And being the good actor that he is, he makes you feel a lump in the throat whenever the film asks him of it. Sye Raa is the best Chiranjeevi vehicle since Tagore. Remember? That was 16 years ago. If you haven't lost interest in him in 16 years, then you will find Sye Raa a total hoot.

You may also find the film to your satisfaction if you enjoy your frequent dose of 70mm nationalism. Sye Raa is replete with pronouncements on love for the country and duty for the nation and Bharat Maata ki Jais. It doesn't matter that the very notion of Bharat Maata came up in a play by Bankim Chandra Chattarjee in 1874, some 30 years after Reddy's death. The heart wants what it wants. Particularly when the heart wants to see a bunch of white people in red coats being impaled by desi swords.

Now, then, if you are neither too nostalgic about our lead actor nor too keen on tripping on anachronistic patriotism, you might be interested in the aspects of filmmaking and see why we feel sorry for the director.

Surender Reddy who was happily making attractive potboilers should have ideally gone on to follow up Kick 2 with Kick 3, or Race Gurram with Betting Kodi. For a man who fills his films with masala staples like logicless twists and unhinged comedy, Sye Raa Narasimha Reddy is practically Attenborough's Gandhi. And Surender Reddy struggles to make it work.

We are not saying he's incompetent. We enjoyed Race Gurram as much as the next guy. We're only remarking on how Surender Reddy's best credentials lie in making a film incredibly entertaining and holding you to your seat at whatever cost it takes. If you remember Posani gasping in Race Gurram "Elaa avuthaavu raaja policeu, logic lekunda?", you'll see logic is the high cost Reddy pays for making a film entertaining.

And now he's hired to make this film which has no duets, no comedy tracks, no tremendous twists, not even basic light-heartedness. The film is an inevitable tragedy, unless you decide to make a Tarantinoesque change of history where Chiranjeevi's character kills all the British and rules all Telugu People forever (oh, the dream). This seriousness and tragic ending is evidently uncharted territory for Surender Reddy. So he does the diligent directorial duty but barely manages to get his own madness into the film.

Reddy gets good work done with Rathnavelu's visuals (sometimes enhanced and sometimes ruined by sticky CGI) and Rajeevan Nambiar's spellbinding production design. Julius Packiam's score aims at the higher notes too frequently but Amit Trivedi's songs are rousing. Above all, there is that crazy action choreography by Greg Powell, Lee Whittaker and Ram-Laxman.

With all that diligence, he does put together some great moments reminding us that he has got craft after all. You are moved by Rohini's scene where you learn about her kid stealing. Jagapathi Babu gets a nice tracking shot after he leaves his son for dead. Tamannaah gets the best of these moments in her aesthetically shot final scene. There is always the next slo-mo Chiranjeevi shot round the corner. So every now and then you have something to be interested in, but Surender Reddy is at a loss for how to put it all together as one piece.

He gets his writers (Sai Madhav Burra and Paruchuri brothers) to throw in sub-plot after sub-plot. Some work and some don't. Even if they all worked independently, these disparate sub-plots still needed a weave at least as lovely as Chiranjeevi's wavy wig. But no, the sub-plots sit next to each other like strangers in a crowded city bus. The film, even at 171 minutes, is indeed crowded, and Sreekar Prasad seems almost unaware. The editing is so weird that there's a strange shot where Amitabh Bachchan simply materialises in a frame out of the damn blue.

The dislaimers loudly and lengthily declare that this film is not a biopic. Did Surender Reddy ever wonder, then, why he had to dig up a forgotten rebel and then bury him under fresh fiction? Did he wonder why his gut tells him to make people laugh but he's working so hard to make people cry? At some point in his association with this strange project, we wonder if he stared into a mirror and mumbled, "Why raa, Surender Reddy?"
Share. Save. Connect.
Tweet
SYERAA NARASIMHA REDDY (HINDI) SNAPSHOT 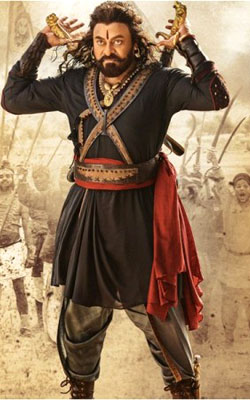 ADVERTISEMENT
This page was tagged for
1337×syeraa narsimha Hindi
syeraa movie hindi
narsimha reddy movie hd hindi
syeraa narasimha reddy full movie hindi online watch
syeraat narasimha reddy Hindi movies. to
Follow @fullhyderabad
Follow fullhyd.com on
About Hyderabad
The Hyderabad Community
Improve fullhyd.com
More
Our Other Local Guides
Our other sites
© Copyright 1999-2009 LRR Technologies (Hyderabad), Pvt Ltd. All rights reserved. fullhyd, fullhyderabad, Welcome To The Neighbourhood are trademarks of LRR Technologies (Hyderabad) Pvt Ltd. The textual, graphic, audio and audiovisual material in this site is protected by copyright law. You may not copy, distribute, or use this material except as necessary for your personal, non-commercial use. Any trademarks are the properties of their respective owners. More on Hyderabad, India. Jobs in Hyderabad.