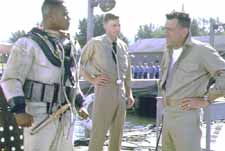 Feroz Hassan / fullhyd.com
EDITOR RATING
7.0
Performances
Script
Music/Soundtrack
Visuals
NA
NA
NA
NA
Suggestions
Can watch again
NA
Good for kids
NA
Good for dates
NA
Wait to rent it
NA
True stories look like the last real source of genuine drama in Hollywood. Be it The Insider or Erin Brockovich or The Perfect Storm, these movies exude real emotion, and the ones that aren't 'real' are either sci-fi or Schwarzenneger movies (the comedies are anyway dirty enough to qualify as real). Men of Honor seeks to tell the story of Carl Brashear, the first black Navy diver in the United States Navy. Of course it didn't come easy to him, but it is difficult to believe that there actually were people who went out of their way to make it so tough.

Carl is the son of a peasant who often works just to retain his land. In 1948, when the US Army is segregated by Trevor Roosevelt, Carl joins the Navy, but finds himself relegated to the kitchen. He breaks protocol to impress his seniors and aspires to become a Navy diver - just like Master Chief Billy Sunday (Robert De Niro) who inspires him with a deadly act of courage.

Then it's the good old fight against racism and customs with his back against the wall. But where most Hollywood movies would end when Brashear becomes a diver, this continues to probe away, simultaneously exploring the fortunes of Billy Sunday. Sunday is posted as a trainer after a near fatal accident and all the scorn born from the crippling injury is vented on his pupils. After he allows Carl to pass the qualifying test, much against the wishes of his superior, he is transferred and takes to drink, and later eggs on Carl to regain the job after the latter looses his limb.

The whole movie is a Black vs. White issue that kind of lives up to its theme by etching out characters in black and white. The dialogues, too, are generally glib, but with a couple of gems. Mr Pappy, the commanding officer, explains to Sunday that 80% of the dust is just human skin, so he must take care who he invites over to his place. It is a scathing remark, for once shorn of blatant cussing.

De Niro has often picked up roles that were better left to lesser mortals, but once he takes them up it's difficult to think of anyone else doing it. For one thing, no one could smoke a cigar like him. It hasn't changed over all these years. Cuba Gooding Jr, though, looked to be having the dream role but, surprisingly, it has little to test his histrionic ability. Baffled and determined he can easily look, and that's what he required to do all through. Little variation here!

ADVERTISEMENT
This page was tagged for
what can you tell me about Robert De Niro's role in Men of Honor
movie review of men of honor
Men Of Honor english movie
Men Of Honor reviews
release date
Follow @fullhyderabad
Follow fullhyd.com on
About Hyderabad
The Hyderabad Community
Improve fullhyd.com
More
Our Other Local Guides
Our other sites
© Copyright 1999-2009 LRR Technologies (Hyderabad), Pvt Ltd. All rights reserved. fullhyd, fullhyderabad, Welcome To The Neighbourhood are trademarks of LRR Technologies (Hyderabad) Pvt Ltd. The textual, graphic, audio and audiovisual material in this site is protected by copyright law. You may not copy, distribute, or use this material except as necessary for your personal, non-commercial use. Any trademarks are the properties of their respective owners. More on Hyderabad, India. Jobs in Hyderabad.