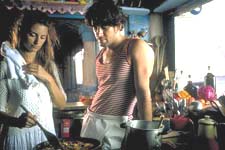 Feroz Hassan / fullhyd.com
EDITOR RATING
6.0
Performances
Script
Music/Soundtrack
Visuals
NA
NA
NA
NA
Suggestions
Can watch again
NA
Good for kids
NA
Good for dates
NA
Wait to rent it
NA
As you watch the posters sporting Penelope Cruz buried under red chilies and looking red hot herself, you know that the Latin folks are far from taking their first wrong step. After all, Cruz and chilies are any day hotter than Mena Suvari and roses that we had in American Beauty. Looks like sultry sirens, salsa and serenade are all that they need to work on to woo America. Jennifer Lopez, Carlos Santana and Ricky Martin know the formula and they play by it, and Fina Torres, the director, is no different. She has the first thing in Cruz, and the second and third she distributes among the other artists.

This is, as the opening narration explains, a story of love, motion sickness and the art of cooking. In short, it is about Isabella (Cruz) who embodies all three. After her husband, Toninho (Murilo Benicio), gets tired of having her on top (motion sickness is the culprit), literally, he tries to find some other women whom he can be on top of. So Isabella takes that long due flight to the US to cook for fame.

With her transvestite friend Monica (Harold), she gets to star on a food show whose producer, Cliff (Mark), has been floored by her and her food. Toninho follows her trail and ends up singing on her show, and now it's a three-way struggle for love and by now irrelevant food.

There is also the sea goddess, and the way she responds to prayers and all befits the best of fairy tales, as well as the most pedestrian of Indian movies. It's up to you on how to look at it. I'd say the former view would help you have a better time of it.

Penelope Cruz does what her kind do best - sizzle. As for her acting, she smiles enough, sighs at the right times and has that blank look that leaves nothing to distract one from her beauty. That means she does her job well. For once, it looks like the movie is Ally Mcbeal gone Latin and wrong (there are quite a few weird parts), until Isabella gets back with her guy. Ally would never do that.
Share. Save. Connect.
Tweet
WOMAN ON TOP SNAPSHOT

ADVERTISEMENT
This page was tagged for
Woman On Top english movie
Woman On Top reviews
release date
Penelope Cruz, Murilo Benicio
theatres list
Follow @fullhyderabad
Follow fullhyd.com on
About Hyderabad
The Hyderabad Community
Improve fullhyd.com
More
Our Other Local Guides
Our other sites
© Copyright 1999-2009 LRR Technologies (Hyderabad), Pvt Ltd. All rights reserved. fullhyd, fullhyderabad, Welcome To The Neighbourhood are trademarks of LRR Technologies (Hyderabad) Pvt Ltd. The textual, graphic, audio and audiovisual material in this site is protected by copyright law. You may not copy, distribute, or use this material except as necessary for your personal, non-commercial use. Any trademarks are the properties of their respective owners. More on Hyderabad, India. Jobs in Hyderabad.