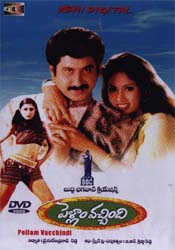 EDITOR RATING
5.0
Performances
Script
Music/Soundtrack
Visuals
NA
NA
NA
NA
Suggestions
Can watch again
NA
Good for kids
NA
Good for dates
NA
Wait for OTT
NA
It is a long endless wait before a wife arrives in the life of Suman. But when she finally arrives, it is not the girl he is in love with, but a girl on the run. And they are forced to become husband and wife. The hero tries to wriggle out of this uncomfortable situation, only to be pulled deeper and deeper into it.

Suman lives in the house of Ramaprabha, pretending to be a married man. He is chased by Shraddha, who is madly in love with him. She derides him, and uses all the tricks in her repertoire to prove that he is a bachelor, and that his wife would never come. Her motive is simple. Once the truth is out, she can marry him. But our hero, though not married, is in love with Radhika. And they can't marry owing to financial problems.

When everything is going smooth and they want to get married, he encounters a typical problem. A girl on the run, Manichandana, seeks shelter in his house because the police are after the goon who has bought her from her in-laws. Taking her to be Suman's wife, Ramaprabha arranges for a traditional marriage, and the nuptials are tied. Does he get rid of Manichandana and marry his ladylove? Or does he marry Shraddha, who almost stalks him?

Pellam Vachchindi is a two-hanky affair, which brings to fore the trauma of a girl who is left at her in-laws place by her husband who goes to participate in the Kargil war. They use all methods to ruin her happiness, including making her do semi-nude dance numbers at the seedy open-air clubs. Finally, with the desire of raking in more moolah, they get rid of her by selling her to a pimp.

The film is a stark reminder of the harassment meted out to brides by in-laws when their husbands are employed elsewhere. If that is the objective of the filmmakers - and it seems from the promos that it is -, they have succeeded in their attempt, as we are bound to be moved by the inhuman treatment meted out to Manichandana.

But the film is not all about bride beating. It also has loads of comedy. The scenes in which Sharaddha chases Suman provide some laughs, though most of them are not worthwhile. A movie you can go to if you are an ardent fan of the meloncholic.
Share. Save. Connect.
Tweet
PELLAM VACHCHINDI SNAPSHOT

ADVERTISEMENT
This page was tagged for
Pellam Vachchindi telugu movie
Pellam Vachchindi reviews
release date
Suman, Shraddha
theatres list
Follow @fullhyderabad
Follow fullhyd.com on
About Hyderabad
The Hyderabad Community
Improve fullhyd.com
More
Our Other Local Guides
Our other sites
© Copyright 1999-2009 LRR Technologies (Hyderabad), Pvt Ltd. All rights reserved. fullhyd, fullhyderabad, Welcome To The Neighbourhood are trademarks of LRR Technologies (Hyderabad) Pvt Ltd. The textual, graphic, audio and audiovisual material in this site is protected by copyright law. You may not copy, distribute, or use this material except as necessary for your personal, non-commercial use. Any trademarks are the properties of their respective owners. More on Hyderabad, India. Jobs in Hyderabad.