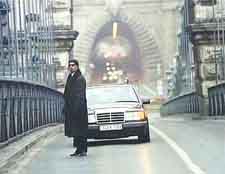 Chinmayi Sirsi / fullhyd.com
EDITOR RATING
5.0
Performances
Script
Music/Soundtrack
Visuals
NA
NA
NA
NA
Suggestions
Can watch again
NA
Good for kids
NA
Good for dates
NA
Wait for OTT
NA
Bollywood has in its fans a rather accommodative and understanding audience, willing to stretch their imagination to dubious heights, eager to believe in miracles and inclined to share the director's fantasies - all this provided the director gives them enough reason to. I do believe the job profile of a director includes the clause, "Candidate must possess the art of lending credibility to the incredible." Rakesh Omprakash Mehra fails that clause miserably, consequently failing his cause.

I suppose one could appreciate the experiment that Aks is, admire the effort that went into trying to make an offbeat movie while straying not very far off the beaten path. But that's as far as the appreciation goes. As for the end product, contempt and mild regret are the ruling emotions.

Manu Verma (Amitabh Bachchan) is a security officer in charge of the safety of a number of important looking officials. Raghavan (Manoj Bajpai) is a neurotic hired assassin. Their paths cross (literally!), when Raghavan disguises himself as Manu (perfect mask, high heeled shoes) and kills the defense minister. A few similar murders and a nicely done chase later, Raghavan is captured by Manu and put behind bars (before this, Raghavan hunts a pack of wolves in an excellently taken but "huh" scene).

Then Raghavan tries to escape and is shot dead by Manu. Huh again. What about the rest of the movie? Not to worry. Raghavan (or his ghost, or spirit, or aatma, or whatever...) possesses Manu's body and so Manu becomes Raghavan... or Raghavan becomes Manu... well, never mind, actually.

The rest of the movie deals with how Manu fights his demons (yes, that was intended). As it unfolds, the story gets more and more absurd. Manu the Man sees Raghavan the Ghost when he looks into the mirror, convinces Mita (Raghavan's girl) of his "ghost" identity, romances/rapes Mrs. Manu Verma aka Supriya (Nandita Das), and hangs to death the judge who sentenced him. He also continues business, as usual. Minor events lead to two different climaxes, both of which seem to have nothing to do with each other.

We do understand that the movie deals with the theme of good and evil in man, but its treatment leaves a lot to be desired. First things first - where is the background? Why is Manu married to a woman twenty years his junior? Who is he, apart from being a security officer? Why is Raghavan neurotic (we do get an excuse for a background, but...)? And the transition, the possession, if you please - what actually happens? No answers - only sometimes indecipherable, dramatic dialogue, action and then some more. And it's all so badly edited, it feels as disjointed as the pieces of two entirely different puzzles.

The poor actors with their innocent belief in their director's ability to piece it all together - you really pity them. None of them deserves such treatment. Yet the movie offers them enough space to perform, and what you finally remember of it are some brilliant individual scenes, isolated from the rest of the film as they fit nowhere.

Both Manoj Bajpai and Amitabh Bachchan have very meaty roles and are good, though they do tend to get carried away with them at times. Raveena Tandon gets a few songs and a few intense scenes, which she carries well. Nandita Das gets a raw deal - her one-dimensional "pativrata patni" role sits very badly on her. The songs, with lyrics by Gulzar, are well-picturized, especially the "ramlila".

Nevertheless, the performances do not help the fact that Aks is a movie gone horribly wrong. It isn't the story that I'm complaining about - it defies all logic, but so does running around trees. What makes Aks so average is its constant shifts from the literal to the symbolic, its fragmentation, the sneaking in of clichés through the back-door and the lack of any answers - neither to the social nor to the ethical issues raised. This movie is more a shadow than a reflection - a sad shadow of what it could have been if only...
Share. Save. Connect.
Tweet
AKS SNAPSHOT

See Aks full details
AKS USER REVIEWS
1 - 7 OF 7 COMMENTS
POSITIVE  |  NEGATIVE |  NEWEST  |  OLDEST  |  MOST HELPFUL  |  LEAST HELPFUL
USER RATING
5.6
48 USERS
Performances
Script
Music/Soundtrack
Visuals
NA
NA
NA
NA
Can watch again - NA
Good for kids - NA
Good for dates - NA
Wait for OTT - NA
DAM on 7th Oct 2016, 11:28am | Permalink
The movie has its flaws in story portrayal , however the characters played by the stalwarts are made supebly awesome especially by Mr.Bajpai.
He is brilliant.
Bachchan Sir is best as usual but the little time he spends with family looks superficial and not natural

dont we get original topics

ADVERTISEMENT
This page was tagged for
Akas movie story
aks movie
aks hindi movie
Aks hindi movie
Aks reviews
Follow @fullhyderabad
Follow fullhyd.com on
About Hyderabad
The Hyderabad Community
Improve fullhyd.com
More
Our Other Local Guides
Our other sites
© Copyright 1999-2009 LRR Technologies (Hyderabad), Pvt Ltd. All rights reserved. fullhyd, fullhyderabad, Welcome To The Neighbourhood are trademarks of LRR Technologies (Hyderabad) Pvt Ltd. The textual, graphic, audio and audiovisual material in this site is protected by copyright law. You may not copy, distribute, or use this material except as necessary for your personal, non-commercial use. Any trademarks are the properties of their respective owners. More on Hyderabad, India. Jobs in Hyderabad.