Deep (Suri) and Shanti (Chawla) are happily married. They have a daughter, Muskaan, and are 7 months into the next child. Rishi (Bose) is Deep's brother, and very close to the family. Right now, though, he's having trouble with his wife Nicky (Khanna) and they are on the brink of divorce.

Deep and Rishi work together in an advertising firm, but their main engine oil in life is the Jhankaar Beats music competition. It's the major topic of discussion between Deep and Shanti and the major topic of frustration between Rishi and Nicky. And oh yeah, they haven't won in like... ever. 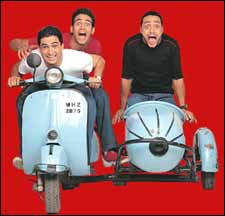 At a club show one night, Rishi and Deep find themselves a guitarist short, and Neel (Munshi) jumps in. Neel is introduced to Rishi and Deep's reverend father in ragas, R D Burman, whom they call 'Boss', and the trio's journey towards the competition begins. Turns out Neel is the other two's ad job boss's son, and gets thrown into a condom ad campaign with them.

Together, they try to get Neel to confess his love for Preeti (Sen), and this makes for some further laffs and general golmaal. What happens to the three couples and the severely understated music competition forms the rest of the meandering plot.

The best part is Juhi Chawla - she looks absolutely radiant and carries herself with aplomb. Rahul Bose is as only he can be, but whatever it is he does, he's reasonably good at it. Playing the fool comes naturally to some... can't blame them really. Sanjay and Rahul try desperately to forge some chemistry in the first half and the effort, sadly, shows.

In fact, the whole effort seems to move like Rishi's ageing 4-wheeler - in fits and starts. For example, debutant Sujoy Ghosh decides at one point that Deep and Shanti are looking too comfy and gives them an impromptu, out-of-character spat over a minor issue. Then it's gone in 3 minutes with a song! C'mon dude, if you're going to make something different, at least make it believable.

While the lead foursome are good in their roles, it's the babes in the Bollywoods Shayan and Riya who seem to be following the wrong trail of acting crumbs. Shayan looks reasonably cute - or so I thought. Pooja* sitting next to me didn't think he was all that hot. Poor Shayan - he tries but that there was his last lifeline going phussss.

Riya needs major diction lessons - she looks and sounds like she's stoned immaculate throughout all of her... three scenes. While she's at it, she might as well take the complete package and pay a visit to the acting classes too - sometimes her expressions are so vacant, the Bombay Builders' Association can build some flats in between her dialogues. But she dances okay, though... and she's fit! Some have built careers on those talents... guess time will tell. 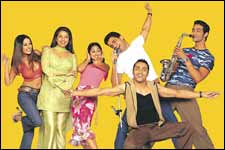 Coming back to the film, it has enough laughs to carry it through, but it's almost tediously long. And it suffers a sizeable Dil Chahta Hai hangover, without even a fourth of its happy high. Sujoy has used some good cinematographic techniques and the songs aren't so bad, especially the one sung in the church to woo Preeti. All in all, it's a feel-good film, and those are like water these days - severe shortage!

In spite of obvious goof-ups, Jhankaar Beats is worth your while.

ADVERTISEMENT
This page was tagged for
Jhankaar Beats hindi movie
Jhankaar Beats reviews
release date
Sanjay Suri, Juhi Chawla
theatres list
Follow @fullhyderabad
Follow fullhyd.com on
About Hyderabad
The Hyderabad Community
Improve fullhyd.com
More
Our Other Local Guides
Our other sites
© Copyright 1999-2009 LRR Technologies (Hyderabad), Pvt Ltd. All rights reserved. fullhyd, fullhyderabad, Welcome To The Neighbourhood are trademarks of LRR Technologies (Hyderabad) Pvt Ltd. The textual, graphic, audio and audiovisual material in this site is protected by copyright law. You may not copy, distribute, or use this material except as necessary for your personal, non-commercial use. Any trademarks are the properties of their respective owners. More on Hyderabad, India. Jobs in Hyderabad.