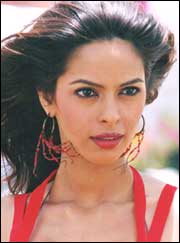 Deepa Menon / fullhyd.com
EDITOR RATING
3.0
Performances
Script
Music/Soundtrack
Visuals
NA
NA
NA
NA
Suggestions
Can watch again
NA
Good for kids
NA
Good for dates
NA
Wait for OTT
NA
A more apt title there wasn't since a certain explosively gassy concoction was called Boom . K4 (as we will henceforth refer to the film in question) has more smackeroonies than Sherawat's last film, but fewer than her first one. The difference with the kisses this time is that they're very, very un-Bollywood in their liberal use of tongue. It's like the actors are attempting an extempore tonsillectomy without anesthetic. The rest of the movie is less fun, but as painful.

K4 is a really desperate effort to make you laugh, which is nice and everything, but like all films of that genre it leaves the aisles as roomy as ever. Once in a while you might smile grimly, but that's about it.

Hasmukh Mehta (Dharmendra looking amused and lost) is a filthy rich stockbroker, with a wife (Rati Agnihotri) and a son (Sidharth Makkar) who religiously endeavor to blow up all his money. In order to teach them a lesson, Mehta drives his son out of the house and flings his wife's diamond necklace out of the window. Although this last move might sound puzzling at first, we realize later that it was the clever director's way of introducing the film's main point, Mallika Sherawat and her surreal gravity-defying cleavage. Turns out Meena (Sherawat) was just a stone's throw away, not to mention a few marbles short.

To make up for knocking her down with an expensive piece of jewelry, Mehta buys her some more. Sherawat plays the role of the clueless bimbette with such chilling precision, we're certain she spent many hours painfully practicing this act. She never asks any questions of anyone as the mesmerizingly under-dressed Meena, and goes through the film with an amiably vacant expression, disturbed by short spurts of rapid hamming.

When the city catches whiff of a millionaire's affair with a young girl, they waste no time on subtleties. Meena suddenly finds herself installed in a posh hotel and flooded with jewelry and Mercs. Not wanting to rock the boat and being quite happily blank she goes along with the pretence, never realizing what it's all about.

Satish Shah plays the owner of the posh hotel and provides whatever humor he can by way of his bad Hindi, which he employs to say things like, "Mujhe aapse milkar bahut khujli huyi." Okay, so it isn't the laugh of the decade but compared to the rest of the lines, it's pure Groucho Marx.

A lot of things happen and then the film ends. We realize this is not a satisfactory summary but how do you put into a few coherent words all the messed up threads that K4 tries to follow. Even the director couldn't do it. And we are but mere mortals, a fact that movies like this drive painfully home.

ADVERTISEMENT
This page was tagged for
Jatra thodari jawab
Kis Kis Ki Kismat hindi movie
Kis Kis Ki Kismat reviews
release date
Mallika Sherawat, Dharmendra
Follow @fullhyderabad
Follow fullhyd.com on
About Hyderabad
The Hyderabad Community
Improve fullhyd.com
More
Our Other Local Guides
Our other sites
© Copyright 1999-2009 LRR Technologies (Hyderabad), Pvt Ltd. All rights reserved. fullhyd, fullhyderabad, Welcome To The Neighbourhood are trademarks of LRR Technologies (Hyderabad) Pvt Ltd. The textual, graphic, audio and audiovisual material in this site is protected by copyright law. You may not copy, distribute, or use this material except as necessary for your personal, non-commercial use. Any trademarks are the properties of their respective owners. More on Hyderabad, India. Jobs in Hyderabad.