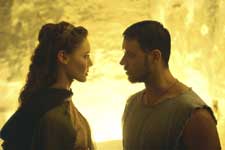 Christopher Domingo / fullhyd.com
EDITOR RATING
9.0
Performances
Script
Music/Soundtrack
Visuals
NA
NA
NA
NA
Suggestions
Can watch again
NA
Good for kids
NA
Good for dates
NA
Wait to rent it
NA
'Battle Formation, Archers, Catapults! ATTACK!!!' And there is the clash of steel, the thundering of hooves, war cries, dismembered limbs, severed heads, howls of death and shouts of triumph. And as the bloody dust clears, it's another victory for the invincible Romans, this time against the barbarians at the border of Germania, under the command of the mighty and courageous Commander Maximus (Russell Crowe). This battle scene, shown in an all its gory reality, is how the movie begins, and ensures that even a hundred horses will not drag you from your seat.

Russell Crowe, the talented actor born in New Zealand and raised in Australia, is taking Hollywood by storm. And he rightfully deserves all the adulation and fame that he has earned. Brawn, brain and immense talent, all wrapped in one, is something that you come across rarely, and this is one of those. From Romper Stomper (the lesser known Aussie movie) to The Insider, Crowe has proven time and time again that he is a star that will shine, and shine brightly for many a moon. And Gladiator is, without a doubt, another feather in his already illustrious cap.

The aging Caesar (Richard Harris) is a worried emperor over the fate of Rome, with a disturbed and ambitious son Commodus (Joaquin Phoenix) who is unworthy of the throne. All Caesar can do is wish that his wise and beautiful daughter Lucille (Connie Nielsen) were born a man. With no capable heir, the only choice is Commander Maximus, a farmer by profession, whose love for Rome and Caesar make him the ideal choice.

Of course, Commodus doesn't like this, and murders Caesar. Maximus and his family are sentenced to death for his refusal to serve Commodus after his father. Escaping death and gravely injured, Maximus rushes home to save his family, only to find them brutally executed. Collapsing in shock and anguish, he wakes up to find himself being sold as a slave, to fight or die in the arenas.

Maximus earns both name and fame in these bloody arenas of death as Spaniard, the best Gladiator ever. His burning vengeance and hatred bring him to the coliseum in Rome to fight against the best. How he manages to save Rome before he breathes his last, from the tyrannical rule of Commodus, makes up the rest the movie.

The film is directorial excellence, all praises to Ridley Scot for bringing this thoroughly engrossing and entertaining film to screen. One cannot write enough about the quality and the depth of the performance of each and every actor in this movie. Joaquin Phoenix's portrayal of a disturbed, insecure emperor, who has more than a sisterly love for his sister, is outstanding and brilliant. Russell Crowe, Connie Nielsen, Richard Harris and all involved have all given performances that will stay etched in your memory.

The magic that cinema can create is present in every bit of this masterful movie. The sets, stunts and camerawork are downright superb. One aspect that shines right through are the dialogues - each and every one is filled with class and punch. This is one movie we hope will do well at the Oscars. Do not miss this movie for the world, and make sure you watch it on the big screen to thoroughly enjoy it.
Share. Save. Connect.
Tweet
GLADIATOR SNAPSHOT

ADVERTISEMENT
This page was tagged for
Gladiator english movie
Gladiator reviews
release date
Russell Crowe, Connie Nielsen
theatres list
Follow @fullhyderabad
Follow fullhyd.com on
About Hyderabad
The Hyderabad Community
Improve fullhyd.com
More
Our Other Local Guides
Our other sites
© Copyright 1999-2009 LRR Technologies (Hyderabad), Pvt Ltd. All rights reserved. fullhyd, fullhyderabad, Welcome To The Neighbourhood are trademarks of LRR Technologies (Hyderabad) Pvt Ltd. The textual, graphic, audio and audiovisual material in this site is protected by copyright law. You may not copy, distribute, or use this material except as necessary for your personal, non-commercial use. Any trademarks are the properties of their respective owners. More on Hyderabad, India. Jobs in Hyderabad.