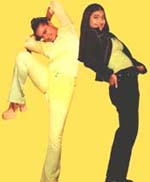 Avishek Gupta / fullhyd.com
EDITOR RATING
6.0
Performances
Script
Music/Soundtrack
Visuals
NA
NA
NA
NA
Suggestions
Can watch again
NA
Good for kids
NA
Good for dates
NA
Wait for OTT
NA
Just when you thought double-roles were a thing of the past (barring David Dhavan flicks, of course, which are never complete without one), we have a stunning example of what a good actress can do enacting diametrically opposite identical twins. Pritish Nandy Communications Ltd's Kuch Khatti Kuch Meethi, edited-directed by Rahul Rawail, is a switching-places saga of twins.

Tina (Kajol) is a hothead. She is a rebel, but not without a cause. The palatial mansion in which she lives also houses her alcoholic father Raj Khanna (Rishi Kapoor), whose drunken state leaves him with no time for her. To top it is a scheming aunt (Mita Vaishist) who, with her son Teddy (Mayur) and lover (Pramod Moutho), a doctor, forms the prime cause of the Khanna family's doom.

The evil aunt's sugarcoated attempts at creating misery cause Tina to leave her home one fine day, and fly across the seven seas. And who should she meet there but her sweet and demure twin sister Sweety (Kajol again) and their mother Archana (Rati Agnihotri), whose existence she was oblivious of.

Tina and Sweety resolve to take matters in their contrasting hands. The East may never meet the West, but their parents definitely will. And then begins a roller coaster ride filled with plots and plans, laughter and tears, fun and facades, regrets and reunions. The film starts to keep the viewer engrossed, but the pace drops when, soon after the misunderstandings are cleared, Sunil Shetty weaves a yarn about his parents. The sequences that follow, with Sunil impersonating a Gujarati, throw a spanner in an otherwise smooth narrative. However, the drama picks up again towards the climax when the parents - Rishi and Rati - iron out their differences.

Kuch Khatti Kuch Meethi is a mix of several films - the Neetu Singh starrer Do Kaliyan, Disney's The Parent Trap (made in 1961 earlier and 1998 later), the Hema Malini starrer Seeta Aur Geeta and the Sridevi flick Chalbaaz. The remaking of classics, always a risky proposition, is under scrutiny more than ever. But Kuch Khatti Kuch Meethi is slick and sentimental. And most importantly, the film scores in that main department - the cast. Kajol is just what you have known her to be - too good.

Director Rahul Rawail has handled the subject with honesty. Despite the fact that the plot is not innovative, the story still has a lot of heart, and is sure to attract its target audience of families.

However, the film has its share of weaknesses too, the most obvious one being that the drama gets juvenile towards the second half. Also, the film has been unduly stretched in the latter half. How one wishes that Rahul Rawail, credited with editing the film too, done it objectively!

The scripting is not foolproof either. The monumental selfishness of separating twin sisters from each other and never letting either of them know of the other's existence is hard to swallow. Maybe that was okay in the 1960s, but it seems unrealistic today. Also, the romance between Kajol and Sunil Shetty is not stirring enough, and seems half-baked. Ditto for the Pooja Batra track, which seems a last minute add-on.

Anu Malik's music is quite pleasant. The film has two lilting numbers - 'Tumko Sirf Tumko' and 'Kuch Kuch Khatti Kuch Kuch Meethi'. The picturization of the latter is indeed laudable. Cinematography is praiseworthy.

The bulk of the film rests upon the proficient shoulders of Kajol, who seamlessly plays the two roles and infuses life in the characters. Especially as the brat, she is great fun to watch. However, she ought to take care of her weight - she looks plump in several sequences. Sunil Shetty gets no scope to exhibit his talent in an enterprise that is dominated by Kajol.

On the whole, Kuch Khatti Kuch Meethi is a welcome change from the usual bang, bang, shoot-'em-up flicks produced in recent times. The film has its share of flaws, but it is a feel-good movie at the end of the day. It has genuine buoyancy that leaves the viewer happy.
Share. Save. Connect.
Tweet
KUCH KHATTI KUCH MEETHI SNAPSHOT

ADVERTISEMENT
This page was tagged for
Kuch Khatti Kuch Meethi hindi movie
Kuch Khatti Kuch Meethi reviews
release date
Sunil Shetty, Kajol
theatres list
Follow @fullhyderabad
Follow fullhyd.com on
About Hyderabad
The Hyderabad Community
Improve fullhyd.com
More
Our Other Local Guides
Our other sites
© Copyright 1999-2009 LRR Technologies (Hyderabad), Pvt Ltd. All rights reserved. fullhyd, fullhyderabad, Welcome To The Neighbourhood are trademarks of LRR Technologies (Hyderabad) Pvt Ltd. The textual, graphic, audio and audiovisual material in this site is protected by copyright law. You may not copy, distribute, or use this material except as necessary for your personal, non-commercial use. Any trademarks are the properties of their respective owners. More on Hyderabad, India. Jobs in Hyderabad.