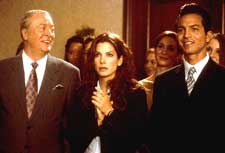 Chinmayi Sirsi / fullhyd.com
EDITOR RATING
6.0
Performances
Script
Music/Soundtrack
Visuals
NA
NA
NA
NA
Suggestions
Can watch again
NA
Good for kids
NA
Good for dates
NA
Wait to rent it
NA
Different movies have different agendas (and I really have an art of stating the obvious, don't I). The point being that this one has Timepass (or the American equivalent of the word) right on top of its priority list. If you are looking for anything other than that, Miss Congeniality will leave you cold.

Gracie Hart (Sandra Bullock) is the kind of woman who would rather wrestle King Kong than wear a dress. An FBI agent (what is it with Hollywood and the FBI?), she is convinced that her life is all about "being the job". But life gets complicated when the job itself demands femininity, grace and poise from Gracie, and she's got lives to save in the bargain.

A notorious serial killer, known only as "the citizen", threatens the security of the Miss United States pageant, and the FBI thinks it a good idea to put an undercover agent on the scene. Gracie is chosen to do the job, and Vic Melling (Micheal Caine), a beauty consultant, has 48 hours to make her look the part of a contestant.

Thus begins the transformation of Gracie Hart, FBI agent, to Gracie Lou Freebush, contestant, the Miss United States pageant, and this is done with the help of an army of beauticians commanded by Melling, bikini wax and tons of patience. The result, of course, is a stunning Sandra Bullock in a dress, though without a walk to match.

As the movie leaps and bounds into the finals of the pageant, "the citizen" is caught and everyone packs and gets ready to leave. Everyone except Gracie, that is. Sensing trouble, she decides to stay put until the end, and that proves to be a wise decision indeed. Eric Matthews (Bratt), her partner, almost leaves but returns when he finally smells the rat. The movie ends with Gracie predictably saving the day and a few lives.

Sandra Bullock lives her role, especially since she is exceptionally good at falling flat on her face. But the role itself gives her little more to do than that. The romance (?) between Gracie and agent Matthews is something the movie could have done without, but can any Hollywoodian Timepass flick do without a kiss towards the end?

The success of the movie can probably be attributed to Sandra Bullock and, it must be admitted, a novel kinda theme. But the hollowness of the script and the superficiality of it all are starkly evident and not very pleasing. Gracie's acceptance of the "Miss Congeniality" award and her speech during the ceremony reek of the expected dialogues, and you are left wishing for the graceless, nonchalant Gracie Hart that she was.

ADVERTISEMENT
This page was tagged for
Miss Congeniality english movie
Miss Congeniality reviews
release date
Sandra Bullock, Benjamin Bratt
theatres list
Follow @fullhyderabad
Follow fullhyd.com on
About Hyderabad
The Hyderabad Community
Improve fullhyd.com
More
Our Other Local Guides
Our other sites
© Copyright 1999-2009 LRR Technologies (Hyderabad), Pvt Ltd. All rights reserved. fullhyd, fullhyderabad, Welcome To The Neighbourhood are trademarks of LRR Technologies (Hyderabad) Pvt Ltd. The textual, graphic, audio and audiovisual material in this site is protected by copyright law. You may not copy, distribute, or use this material except as necessary for your personal, non-commercial use. Any trademarks are the properties of their respective owners. More on Hyderabad, India. Jobs in Hyderabad.