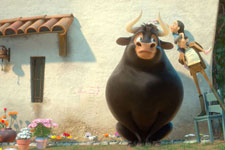 T J Reddy / fullhyd.com
EDITOR RATING
6.0
Performances
Script
Music/Soundtrack
Visuals
7.0
5.0
4.0
6.0
Suggestions
Can watch again
No
Good for kids
Yes
Good for dates
No
Wait to rent it
No
Back in the good old days (circa 2006), a random, well-built young man named John Cena came out to little fanfare and challenged Olympic gold medalist Kurt Angle in an impromptu WWE match. After nearly 15 minutes of edge-of-the-seat beauty, the young Cena was defeated in a closely choreographed contest. Soon after he was commended by none other than The Undertaker. Since that day, he has always been a made-man in the world of wrestling.

After that now-fondly-remembered debut, Cena went from strength to strength until he turned the flag-bearer of a billion-dollar company. But with that mantle came a carefully crafted image. And that persona matches his latest movie role in more ways than one.

The movie Ferdinand (John Cena), based off the popular children's books, follows the life and times of the flower-loving, violence-hating titular bull. As a calf, he escapes a ranch that specializes in breeding bulls for professional bull fighters (matadors). His great escape leads him to a quaint flower farm run by Juan (Juanes), his daughter Nina (Lily Day) and their dog Paco (Jerrod Carmichael). As the years go by, Ferdinand grows up to be the gentle giant he was genetically destined to be.

While Ferdinand has an enviable physique, he doesn't have an intellect to match. One freak town-square demolition later, Ferdinand finds himself sent back to the aforementioned ranch. With a victory in the bull fight seemingly being the only route to freedom, Ferdinand needs to decide between his stance of non-violence and risking certain death for both himself and the other bulls around him.

Ferdinand's journey en route to realizing his true identity parallels that of Cena's journey through the wrestling landscape. Cena himself is widely seen as an all-powerful behemoth that wouldn't hurt a fly unless he absolutely needed to. Likewise, Ferdinand works at helping and saving his fellow bulls from certain doom, and makes it a point to never forget about the troubles of the little guys (hedgehogs and calming goats). In a dog-eat-dog and bull-fight-bull world, Ferdinand is busy telling anyone that'll listen that his view of the world is of the "bull-smells-flowers" persuasion. Even though his goodness borders on the preposterous, the movie and the character stand their ground as they make the audience sympathize with the character's journey. Are we sure this isn't an animated documentary of The John Cena Story?

A film is also about its themes and story, and the message this movie moos out to the rafters can be compared to that of Bong Joon-Ho's Okja. The latter is a coming-of-age and animal rights story melded into a beautifully rendered, idiosyncratic two hours by the Korean filmmaker, and Ferdinand shares many of the latter's leitmotifs.

What separates Ferdinand from Okja is not that one was made for kids and the other for adults - far from it. If recent Pixar release Coco has shown us anything, it is that heavy themes can be dealt out to both kids and adults when handled with a level of deftness. The crew behind Ferdinand show that they have the requisite deft touch, but what they lack is the conviction to stick to it through thick and "thinking thin". For every moment of well-placed comedy, action, thematic significance or world-building, there are five more that work at a feverish pace to tear it all down. The filmmakers seem petrified to trust in the underlying maturity of their story, the cognitive skills of their audience or both.

Ferdinand is the proverbial glass that is either half empty or full depending on how much of the title character's naïve goodness and the filmmakers' lack of ambition a viewer can relate to. From an objective standpoint, this is a film full of air-headed scenes and bone-headed character moments that fail to capitalize on a foundation as solid as Ferdinand's bulging muscles. When a film does that, the message it tries to get across is, in Joey Tribbiani's words, a moo-point - a cow's opinion no one really cares for.

That doesn't deter John Cena, though. Audience apathy did not hinder his over decade-long career, and by God, it won't deter him now. Cena identifies with the character of Ferdinand so much that you almost forget that he is a bull with an American accent in a film that is set in the heart of Madrid. Matching Cena's straight-laced charm with her screwball antics is Kate McKinnon's calming goat, Lupe - a spitting image of Dory from Finding Nemo but with failing at short-term goals substituting for a loss of short-term memory.

Enjoy these characters when you can, though, as the supporting cast of one-note young girls, Franco-German prancing horses and bulls voiced by NFL stars offer what their two-word character descriptions do and not much else. The filmmakers said, "We paid you good money to be in this movie, Peyton Manning! You won a Super Bowl. You can write jokes, too. It's all the same."

I know this because these are the same people who thought adding a few poppy songs to the film and having horses, hedgehogs and bulls dance to them was a great idea. And because I've pointed this out, you will see it. Once you see it, however, it will be burned into your retinas. This is Vince McMahon's version of the "LOLs". This is a film the WWE should have made but somehow missed.

Sadly, these ludicrous moments are the ones that have the privilege of being seared into your memory as the movie does precious little with its character and world design. The design of this world is what you'd get if the mini-phrase "bang average" had a visual representation.

Like big-match Cena himself, Ferdinand is unperturbed by all the shenanigans he is put through by his undercooked story. Even though the writing is inconsistent, the rules of world-building are fudged left, right and centre, and all this is wrapped in a film so technically unambitious, the purity of intent comes across when it matters the most. That is a testament to the character more than the story itself. And that is why even if you don't like John Cena, his rainbow-coloured merchandise, the stories he is given or his cleaner-than-soap persona, you respect him and his movie at the very least.
Share. Save. Connect.
Tweet
FERDINAND SNAPSHOT 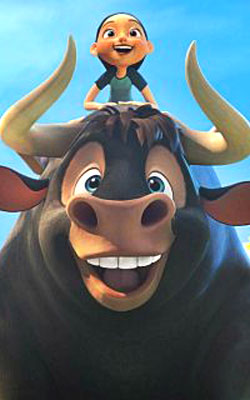 ADVERTISEMENT
This page was tagged for
Ferdinand english movie
Ferdinand reviews
release date
John Cena, Kate McKinnon
theatres list
Follow @fullhyderabad
Follow fullhyd.com on
About Hyderabad
The Hyderabad Community
Improve fullhyd.com
More
Our Other Local Guides
Our other sites
© Copyright 1999-2009 LRR Technologies (Hyderabad), Pvt Ltd. All rights reserved. fullhyd, fullhyderabad, Welcome To The Neighbourhood are trademarks of LRR Technologies (Hyderabad) Pvt Ltd. The textual, graphic, audio and audiovisual material in this site is protected by copyright law. You may not copy, distribute, or use this material except as necessary for your personal, non-commercial use. Any trademarks are the properties of their respective owners. More on Hyderabad, India. Jobs in Hyderabad.