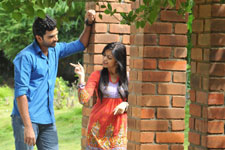 Kritika Deval / fullhyd.com
EDITOR RATING
5.5
Performances
Script
Music/Soundtrack
Visuals
7.0
4.5
7.5
7.0
Suggestions
Can watch again
No
Good for kids
No
Good for dates
Yes
Wait for OTT
Yes
A damsel in distress, a charming knight, a mystery and a romance for the ages - for a film that gets so many things right, Bhadram falls woefully short of expectations.

It all begins when Venu (Ashok Selvan), a fresh faced rookie private detective, is given his first assignment - a list of "subjects" he must keep a track of. One such subject is Madhusree (Janani Iyer), who he falls headlong in love with. Remarkably competent as Venu is at his job, he is utterly at a loss as to his feelings for Madhu. As he grapples with his inability to come clean about his profession and his initial interest in Madhu, Venu gets his first shock - the death of the very first of his "subjects". Soon, they start dropping dead with startling efficiency despite all Venu's efforts at stopping their murders. The only one left is Madhu, and it is upto Venu to rescue the maiden, and solve the mysterious deaths, all of which must apparently happen in one fell blow.

Bhadram starts off gripping you well enough, the most charming part being the astonishingly real romance between Venu and Madhu. It is only when Venu starts delving into waters that he's quite inadequate for that the film starts becoming tedious. The problem is not that the mystery is not meaty enough. The problem is that Venu's character seems much too unremarkable to hold much interest as anything other than a naive young man hopelessly out of his depth.

Not that the fault lies with Ashok Selvan. He is very much in the earnest, whether he is falling hopelessly in love with an utterly winsome creature, or is desperately but ineffectually trying to prevent another murder. It is the effort to play up Selvan's "boy next door" character that lets the film down, apart from the utterly illogical ways that he is made to act in (one of the victims could've been saved so very easily that we wondered if Venu even deserved to play hero). Unlike what most filmmakers seem to think, a hero can actually occupy a space between Neanderthal and incompetent.

Janani Iyer is very pretty, her delicate beauty matching the irreverent yet soft persona of her character. Amir, who plays Venu's bestie, is quite entertaining, even if some quips fly off of your poor Telugu head without making the slightest impact. Jayaprakash is dignified and altogether magnificent when it pleases him.

While the plot itself is quite lukewarm, the cinematography and the background tracks are better than excellent, and could have taken a better film to the next level. As it is, the camera work is responsible for a few hair-raising moments that have been written with mind-numbing mediocrity.

If you're looking for a whodunit that actually makes you care about the who and the what, Bhadram is too half-baked (if it is indeed possible for something to be more, or less, half baked - well, you can mull over this puzzle if the puzzle in the film doesn't suffice). On the other hand, if all you seek is a couple of entertaining hours while you take a respite from the blistering heat outside, perhaps it'll do as well as anything else.
Share. Save. Connect.
Tweet
BHADRAM SNAPSHOT 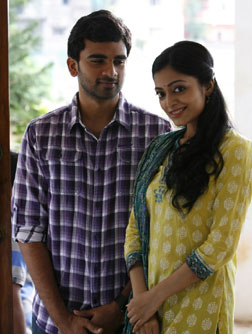 ADVERTISEMENT
This page was tagged for
Bhadram telugu movie
Bhadram reviews
release date
Ashok Selvan, Janani Iyer
theatres list
Follow @fullhyderabad
Follow fullhyd.com on
About Hyderabad
The Hyderabad Community
Improve fullhyd.com
More
Our Other Local Guides
Our other sites
© Copyright 1999-2009 LRR Technologies (Hyderabad), Pvt Ltd. All rights reserved. fullhyd, fullhyderabad, Welcome To The Neighbourhood are trademarks of LRR Technologies (Hyderabad) Pvt Ltd. The textual, graphic, audio and audiovisual material in this site is protected by copyright law. You may not copy, distribute, or use this material except as necessary for your personal, non-commercial use. Any trademarks are the properties of their respective owners. More on Hyderabad, India. Jobs in Hyderabad.