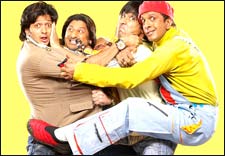 EDITOR RATING
6.0
Performances
Script
Music/Soundtrack
Visuals
NA
NA
NA
NA
Suggestions
Can watch again
NA
Good for kids
NA
Good for dates
NA
Wait for OTT
NA
It's been a while since there's been a truly mindless comedy from Bollywood - aside of Ram Gopal Varma Ke Aag, that is - and Dhamaal prolongs your wait. However, Dhamaal does give its share of chuckles and guffaws, and like we at fullhyd.com always say, a lion in a cage is better than ten people outside it. If you did not get that, you are already on track, for you need to suspend all logic to get on this wagon.

Adi (Arshad Warsi), Manav (Javed Jaffrey), Roy (Ritiesh Deshmukh) and Bamman (Ashish Choudhary) are 4 unemployed louts with so few scruples, they find it quite easy to ignore them. One day they see a stranger dying in a lonely place, and he tells them that since they look like good people, they can pick up Rs. 10 crores from a place in Goa where he's hidden it. Just don't try this yourself - it's a one in million shot, and plus, it's not polite to wait for people to die.

Anyway, they want to go to Goa right away, but when they accidentally spill the beans about the money to an honest cop Kabir (Sanjay Dutt), he immediately does the inevitable - he turns dishonest, and decides to go after the money himself. Which is understandable, really - if Rs. 10 crores cannot convince you to become dishonest, then you're being really greedy.

Kabir first tries to take the shortcut to beating the foursome to reaching Goa - i. e. killing them - but when that doesn't succeed and they keep coming back like a mosquito in the middle of a powerless night, he decides to compromise and share the amount. However, a dispute on the concept of division breaks up the foursome themselves, and now its each for himself.

With no mode of transport, they hijack every available vehicle, and this finds Kabir driving with a 1-year-old who wants her share of the money too and is willing to cry for it, Roy trying to hijack a bus but discovering that it has already been hijacked by some dacoits who take him hostage too, Bamman chartering an aircraft with a particularly temperamental pilot who gets upset by a song on radio and refuses to fly midair, and Manav and Adi getting lifts on everything ranging from road-rollers to the car of a South-Indian who has a never-ending name.

The film is fun, and if you are a little drunk, it can help things a little more. Especially in all those parts where the jokes are what you'd read 2 decades back in Reader's Digest or in Khuswant Singh's columns or in, oh, Tinkle.

There are parts, however, where the laughs are mercilessly side-splitting. The film resorts more to situational comedy rather than plot-centric genius, but unless you are a movie reviewer trying to sound lofty, you really don't care - they do make you laugh, and it's a scientifically proven fact that every time you laugh, you subtract one year from your past.

If you consider Sanjay Dutt the greatest of actors the planet has ever been graced by, you will continue to - he does nothing different. Javed Jaffrey plays a dimwit with such flair, you almost want to be one yourself. Vijay Raaz as an Air Traffic Control officer pitches in with some hilarious dialogue delivery. However, the film is not as much about performances as it is about the gags, and so while Warsi, Jaffrey and the rest are known names, they won't win any awards for this.

There's not much of the visual flair that accompanies a typical Bollywood film, with the movie being shot mostly in the woods and on highways. And there is no great music either - the first song as the credits roll has lyrics so clichéd, even the telephone directory seems more interesting to read.

However, Dhamaal is a good film if you are trying to forget your sins for a while, and is a good reward for being able to successfully clear the metal detector.
Share. Save. Connect.
Tweet
DHAMAAL SNAPSHOT

ADVERTISEMENT
This page was tagged for
Dhamaal hindi movie
Dhamaal reviews
release date
Sanjay Dutt, Ritesh Deshmukh
theatres list
Follow @fullhyderabad
Follow fullhyd.com on
About Hyderabad
The Hyderabad Community
Improve fullhyd.com
More
Our Other Local Guides
Our other sites
© Copyright 1999-2009 LRR Technologies (Hyderabad), Pvt Ltd. All rights reserved. fullhyd, fullhyderabad, Welcome To The Neighbourhood are trademarks of LRR Technologies (Hyderabad) Pvt Ltd. The textual, graphic, audio and audiovisual material in this site is protected by copyright law. You may not copy, distribute, or use this material except as necessary for your personal, non-commercial use. Any trademarks are the properties of their respective owners. More on Hyderabad, India. Jobs in Hyderabad.