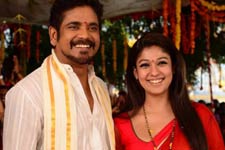 Sure, looking for sense in a movie is a self-defeating act, but absurdity is so firmly entrenched in Greeku Veerudu's very DNA that you wonder if you're the one who's abnormal for noticing that things don't make sense.

Beginning with a throwback to Manmadhudu and Mr. Perfect, Greeku Veerudu introduces us to the commitment-averse Chandu (Nagarjuna, whose stylist clearly has a Tony Stark hangover), who spends all his time generally sneering at people, bedding women, and declaring that he will have nothing to do with relationships of any kind. He doesn't even acknowledge the presence of his relatives in India.

One day, his grandfather's lawyer calls him up from India, and declares that Chandu is inheriting an obscene amount of money. A scheming Chandu, who badly needs all that money to get out of a legal case, immediately flies to India, where nobody is offended by the fact that he never picked their calls but booked a flight ticket the instant the lawyer phoned him.

Don't ask how things turn out how they do next, but Chandu and a co-passenger, Sandhya (Nayantara), who he befriends on the flight, have to now pretend to be a married couple "for a few days" until Chandu gets the cash.

He lies to Sandhya to get her to agree, with a sob story even a 2-year-old could see through. The otherwise sensible woman agrees to be part of this drama in a jiffy, despite pressing professional commitments that involve dying children.

Plumbing the cliched faux-couple act to new depths, the makers actually get the couple married - with wedding finery, witnesses, photographers, mangalasuram and all. Sandhya continues to think she's making the family happy, the family doesn't know this is a lie, and Chandu doesn't care. The bride and the groom, in their own separate ways, seem to think nothing of the significance of this "event", or even its long-term implications. So much for "traditional family values", eh?

Meanwhile, Chandu is bewildered by his family's showering of love. He is grossed out when an aunt feeds him pappannam with her hands, and is puzzled when another hides excruciating appendix pain to not inconvenience her family. After a sugar-drippy sequence in which Chandu understands the value of family, the unthinkable happens.

You realize that this is only half the movie.

After the interval, Chandu realizes that he loves Sandhya. This realization he comes to when Sandhya gives him the thali, as though she were discarding a costume. But before he can come clean with her and confess his feelings, Chandu's ex-flame (Meera Chopra), who he had treated like one would treat a bunch of curry leaves in a plate of pulihara, tells Sandhya all about his past.

What follows is silliness of different layers, interspersed with more silliness. Sandhya is pissed with Chandu, he joins her social work, and together, they go to computer-generated tourist places all over the US. Including NASA. (Also, evidently, the Make-A-Wish Foundation doesn't mind breaking security rules and US law to grant kids their final wishes, even if it means putting them in mortal danger.)

Towards the end, each scene turns out to be worse than its predecessor. In the end, one eligible suitor (Vennela Kishore) for Sandhya is added, and then unceremoniously subtracted, before all the families involved coolly accept that Chandu and Sandhya are meant to be together.

Just in case you're not staying entertained, M S Narayana, Kovai Sarala, Brahmanandam and Dharmavarapu keep sauntering in with "comedy".

Greeku Veerudu's story completely fails to move you in any way. The romance isn't beyond the superficial. Besides, it is extremely unrealistic to assume that a woman as sensible as Sandhya (who, by the way, can easily go down in history as one of Telugu cinema's most cerebral heroines) would actually agree to fake a wedding for reasons as flimsy as in the movie.

Nag is all right as long as he's not dancing. He is quite good as the amoral, opportunistic smooth talker who is deceiving gullible relatives. He's even better as the man utterly confused with the way his family unconditionally loves him, and with his own emotional reactions to life. His is a character well-scripted, and acted-out as well. And he looks great, of course.

Nayantara makes for a very good consort for all these agein... err... senior actors. She's in a refreshingly strong as well as down-to-earth role in Greeku Veerudu, and is a picture of elegance.

The cast consists of respectable names. K Viswanath, Ashish Vidyarthi and the others contribute to this movie with their respective abilities, but none of them can undo the damage done by the script. Naga Babu, yester-year actress Geetanjali and Sarath Babu are also part of the film.

Thaman's music is a a good accompaniment, but too generic and forgettable. The visuals are not impressive, especially the cheesy computer-generated backdrops.

You can connect a triad of dots to draw a triangle, or you can use an extra couple of grey cells to draw a circle with them. The makers of Greeku Veerudu did neither. They somehow ended up with a straight line.

In all, an okay film for the families, in the sense that it doesn't have any adult content. But otherwise, just a lengthy advertisement for the Make-A-Wish Foundation.
Share. Save. Connect.
Tweet
GREEKU VEERUDU SNAPSHOT 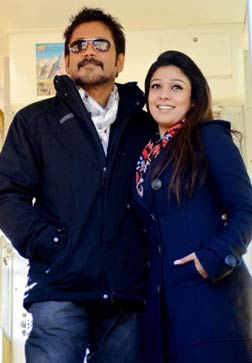 See Greeku Veerudu full details
GREEKU VEERUDU USER REVIEWS
1 - 4 OF 4 COMMENTS
POSITIVE  |  NEGATIVE |  NEWEST  |  OLDEST  |  MOST HELPFUL  |  LEAST HELPFUL
USER RATING
2.0
1 USER
Performances
Script
Music/Soundtrack
Visuals
NA
NA
NA
NA
Can watch again - NA
Good for kids - NA
Good for dates - NA
Wait for OTT - NA
Disappointed Nag fan on 9th May 2013, 2:29am | Permalink
Perfect review!! No scene makes any sense in the movie. And all the scenes happen to be sewed together by a bad darzi! Adding to that is the poor CG work (The worst being the Statue of Liberty Park). I have no idea why nagarjuna chose to act in this movie. And his dance moves in the song "Ne vinnadi Nijamena" were tacky!

"where nobody is offended by the fact that he never picked their calls but booked a flight ticket the instant the lawyer phoned him."

"The bride and the groom, in their own separate ways, seem to think nothing of the significance of this "event", or even its long-term implications. So much for "traditional family values", eh?"

"they go to computer-generated tourist places all over the US. Including NASA. (Also, evidently, the Make-A-Wish Foundation doesn't mind breaking security rules and US law to grant kids their final wishes, even if it means putting them in mortal danger.)"

ADVERTISEMENT
This page was tagged for
Greeku Veerudu telugu movie
Greeku Veerudu reviews
release date
Nagarjuna, Nayantara
theatres list
Follow @fullhyderabad
Follow fullhyd.com on
About Hyderabad
The Hyderabad Community
Improve fullhyd.com
More
Our Other Local Guides
Our other sites
© Copyright 1999-2009 LRR Technologies (Hyderabad), Pvt Ltd. All rights reserved. fullhyd, fullhyderabad, Welcome To The Neighbourhood are trademarks of LRR Technologies (Hyderabad) Pvt Ltd. The textual, graphic, audio and audiovisual material in this site is protected by copyright law. You may not copy, distribute, or use this material except as necessary for your personal, non-commercial use. Any trademarks are the properties of their respective owners. More on Hyderabad, India. Jobs in Hyderabad.