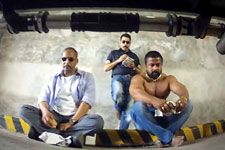 Nupur Barua / fullhyd.com
EDITOR RATING
3.0
Performances
Script
Music/Soundtrack
Visuals
5.0
3.0
4.0
5.0
Suggestions
Can watch again
No
Good for kids
No
Good for dates
No
Wait for OTT
No
2004 was a significant year in the life of Nana Patekar. He took over the silver screen with his depiction of Sadhu Agashe, the man from the Mumbai Encounter Squad, and walked away with well-deserved praise for Ab Tak Chhappan. The movie also brought into the limelight the very talented Shimit Amin, and made Daya Nayak (the inspiration for the character of Sadhu Agashe) a household name.

The sequel, Ab Tak Chhappan 2, is the complete antithesis of everything you ever thought a follow-up to the legendary movie would be, even if it comes a decade later and could have therefore at least taken advantage of some of the technical progress that the Indian film industry has adopted.

Sadhu Agashe (Nana Patekar) is now a retired man, who prefers lazing his days away by frying fish under a clear blue sky. His wife is no longer alive, but Agashe has learned to live contentedly. However, with his past, he cannot remain incognito forever.

Life has not changed much in the outside world, and the underworld is still a threat. The Home Minister (Vikram Gokhale) decides that the city needs to be cleaned up, and contacts the reluctant Agashe. The retired cop does not want to go back to his gun-toting days, but he is forced to, and he has some issues that still need sorting out, especially guilt.

He finds an unlikely ally in a crime reporter (Gul Panag), who is trying to finish a book that her late father begun. Her line of investigation makes the powers that be very uncomfortable. Agashe also discovers, to his surprise, that there is a younger cop, Thorat (Ashutosh Rana), who is not only unimpressed by the return of the infamous encounter specialist, but also very insecure about his own posting. And then Agashe has to figure out just how dangerous the man (Raj Zutshi) in the wheelchair is.

Despite the director's noticeable attempt, and struggle, to retain the flavour of the original, he fails miserably to recreate the magic that Agashe could have been. The screenplay is one of the many causes of this failure. It is weak, with enough loopholes to confuse you halfway through the movie. The approach is very outdated, and the story depends on the rather flimsy premise of "the system", and whether one is in it or out of it. This is repeated, for good measure, throughout the movie, and is rather tedious, because no plausible argument is made for or against the benefits of either. In fact, the sequel is reminiscent of Rambo in a way.

The dialogues are cringe-worthy, to say the least, and are filled with unintentionally funny motivational speeches on right and wrong. Every dialogue is delivered with a straight face, which is another way (for the director) to portray intensity. The result is a monotonous film filled with unsurprisingly futile attempts to revive the original.

The characters, besides that of Agashe, are quite caricaturish. The crime reporter, for example, is shrill and deafening, because she is an independent woman trying to make a difference; and the insecure cop is grouchy and slimy, because he is, well, insecure. Casting the same actor who played Agashe's young son in the first movie, as the grown-up son in this one, may be about the only inspired thing in this film. The rest is a blur, and do not be too harsh on yourself if you cannot remember what Ab Tak Chhappan 2 is all about once you have watched it. Especially now, since you have been exposed to so many cop action movies with bigger stars.

Nana Patekar, jaded as he is, reprises his role of Agashe with some brilliance. He knows what he is doing, and is the only actor worth watching in the movie. You cannot ignore Gul Panag, though, with her screeching. She gets on to your nerves very quickly, and you can hear the collective groan in the theatre every time she appears on the screen. Mohan Agashe looks disappointed with his role, and with the movie. The other actors do their bit, without much enthusiasm.

The production and costume designs are sloppy, and not well done. Nothing in the film seems to have been done by a team of experienced professionals, and that is apparent in the cinematography as well. The background music, by Sandeep Chowta, is deafening and erratic. The editing cannot be faulted here, since the script itself meanders all over the place, but the whole movie does seem to be a series of sequences patched together without a clear mandate. The technical aspect of the film is as big a let-down as the screenplay.

Ab Tak Chhappan 2 is avoidable, especially if you are a fan of the original. It may be a good idea, however, to watch the first movie now, if only to appreciate, again, just how good Nana Patekar was a decade ago. If you are in the mood for a franchise, then it may also be a good idea to revisit the first two Rambo movies, and you may then understand, partly, what it was that Aejaz Gulab wanted to achieve by revisiting Sadhu Agashe.
Share. Save. Connect.
Tweet
AB TAK CHHAPPAN 2 SNAPSHOT 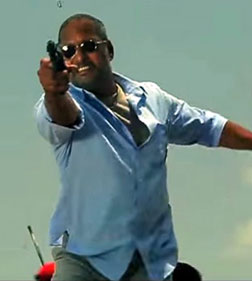 ADVERTISEMENT
This page was tagged for
Ab Tak Chhappan 2 hindi movie
Ab Tak Chhappan 2 reviews
release date
Nana Patekar, Vikram Gokhale
theatres list
Follow @fullhyderabad
Follow fullhyd.com on
About Hyderabad
The Hyderabad Community
Improve fullhyd.com
More
Our Other Local Guides
Our other sites
© Copyright 1999-2009 LRR Technologies (Hyderabad), Pvt Ltd. All rights reserved. fullhyd, fullhyderabad, Welcome To The Neighbourhood are trademarks of LRR Technologies (Hyderabad) Pvt Ltd. The textual, graphic, audio and audiovisual material in this site is protected by copyright law. You may not copy, distribute, or use this material except as necessary for your personal, non-commercial use. Any trademarks are the properties of their respective owners. More on Hyderabad, India. Jobs in Hyderabad.