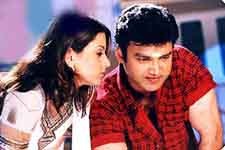 EDITOR RATING
3.0
Performances
Script
Music/Soundtrack
Visuals
NA
NA
NA
NA
Suggestions
Can watch again
NA
Good for kids
NA
Good for dates
NA
Wait for OTT
NA
Brothers of the world come in two varieties. The former consists of the mundane everyday guy - he's human, averagely built and not very high on being macho. This guy hopes that people just leave his sister alone, so there are no unsettling circumstances that he has to deal with. But if the sister happens to be somewhere around good-looking, then there's invariably the neighbourhood eve-teasers ogling and passing unsavory comments on her. So what does he do?

He reacts by acting a little macho when they're around, probably starting exercising, and hoping that that'll ward them off. If they don't, he has no option but to head for a showdown, and since the heart pounding in his chest puts brakes on how aggressive he can get, he ends up with a formal complaint to the elders of the community of the eve-teasers, and they (kind of condescendingly) assure some reigning-in of their wards. Incident hopefully ends.

This is most of the guys you know.

Sivudu is the other category. This is not the guy who gets bullied, he bullies. He doesn't hope that his sister is left alone, he is the reason that she is. You mess with his sister, you end up in one. In other words, the kind of man you've seen countless times on screen. And that's why Sivudu will go down the drain, mercilessly.

There is hardly anything in Sivudu to write a review on. It is the same old rehash of a brother having untold love for his sister, and how he'll do anything to make her happy. An ever-loving, playful guy, he assumes the roudra avatar of Lord Siva of anyone crosses his sister's path. That's where the title comes from. And that's how unimaginative the rest of the film is, too.

The story revolves around Sivudu's constant harping about his unflinching love for his sister, and then around his making fun of his eventual-girlfriend Priya (Kanishka), a not-so-beautiful girl in the Geetanjali-style who keeps making fun of guys who propose to her by scaring them to death in a graveyard. Then she meets her match in Sivudu, and a couple of slanging matches later, falls in love with him.

We then progress to Sivudu's clashing with the dreaded smuggler of the city Satya (Satya Prakash), for a reason too trivial to mention. This clash hardens when Sivudu's brother-in-law Vijay (Vijay), a drugs inspector, comes in the way of the nefarious activities of Satya. And the whole film then revolves either around the sentimental drama of the brother and sister (who also has a sensitive heart ailment) or the choreographed stunt sequences.

Whenever Suresh lets loose his anger in the film, instead of rousing you, it appears boastful, loud and silly. That's the case everywhere - the scenes are so contrived and the presentation so ham-handed, it's remarkably ordinary. Even the comedy essayed by Sudhakar, Gundu Hanumantha Rao and Gowtam Raju is that way.

The film manages to hold your attention for some time in the initial hours, but that's about it. It soon goes haywire with an unimpressive storyline and tasteless direction catalyzing the fall. And as you take your seats after the interval, there is hardly anything for you to watch.

Now, don't you think a film about the first kind of brother would've been something with much more potential?
Share. Save. Connect.
Tweet
SIVUDU SNAPSHOT

ADVERTISEMENT
This page was tagged for
suresh sivudu movie
shivudu suresh telugu movie
Hero Suresh sivudu movie
Sivudu telugu movie
Sivudu reviews
Follow @fullhyderabad
Follow fullhyd.com on
About Hyderabad
The Hyderabad Community
Improve fullhyd.com
More
Our Other Local Guides
Our other sites
© Copyright 1999-2009 LRR Technologies (Hyderabad), Pvt Ltd. All rights reserved. fullhyd, fullhyderabad, Welcome To The Neighbourhood are trademarks of LRR Technologies (Hyderabad) Pvt Ltd. The textual, graphic, audio and audiovisual material in this site is protected by copyright law. You may not copy, distribute, or use this material except as necessary for your personal, non-commercial use. Any trademarks are the properties of their respective owners. More on Hyderabad, India. Jobs in Hyderabad.