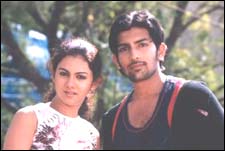 Priyanka Pulla / fullhyd.com
EDITOR RATING
1.0
Performances
Script
Music/Soundtrack
Visuals
NA
NA
NA
NA
Suggestions
Can watch again
NA
Good for kids
NA
Good for dates
NA
Wait to rent it
NA
Chandu (Yuvraj) is a college-goer, who, in keeping with the latest fashion, maintains an emu's plumage on his head. His friends include an expatriate pygmy and two identical twins. You can't distinguish between them except that one of them mimics some famous actor whose name does not readily spring to mind. And another is distinguished by his habit of hanging around below a girl's balcony and making spectacularly suggestive gestures and facial expressions.

That really cocks up Chandu's plumage like nothing else does. He runs around after her in open-mouthed, tongue-dripping adoration, while she chastely spurns his physical advances, yet diplomatically accepting his spiritual ones (or whatever else he was offering).

The tumescence from this point on reaches an all-time high in the movie. The love affair is played out in a few poignant scenes of Chandu trying to feel her up or get a dressing room view while she is shopping for lingerie, and Venella chastising him like a sweet and indulgent convent school nun.

Thus their love builds up to new crescendos, and lots of fun is had. However, their love is not meant to be, which is something they both find out when Chandu decides to confront his father about it. His father spanks his muscled butt in a rather delightfully sudden and violent scene, and dispatches him off with a warning.

Meanwhile, Venella's parents also give off similar ominous signals, which effectively rule out her side of the confrontation. Moreover, Vennella is already engaged to her maternal uncle from the moment she was conceived… er… born, actually.

So C and V, unable to bear the possible future separation, decide to commit suicide together. This is the point at which the movie, in a brave new move of courageous new wave thinking, absolutely smashes all the clichés of Indian cinema.

Chandu and Venella teeter on the edge of the terrace, exchanging their final words of love and hugs. There is shivering and fear and chattering and tears, but no miracle happens to stop them. They actually jump right off!

And fall all the way down. On to a truck of sand. They are rushed to the hospital, treated, and get back their consciousness. But while their respective families are rejoicing and promising to get them both married if only they are okay, the news comes that both victims are suffering from 'retrograde amnesia'.

Now this is said to mean that their brains are like a blank piece of paper unless all the previous memories are newly imprinted on them again. Now the two families are completely thrilled, and decide to get back to their own scheming ways and get them married elsewhere so the problem doesn't come up again.

The remaining part of the movie is about how they get back together, and which of all the possible miracles in the world comes to their rescue. There are cliché-smashers galore - like the scene where even though Chandu is back in her life, although they still don't remember the old times, Vennella actually gets married to her uncle. Down to the moodu mullu. No miracle stopping it here either.

Director Jaya, at her clever and innovative best, algorithmically pushes off all the miracles to an approximate hour after their due ISC (International Standard for Clichés) time. With this foxy move, she raises the movie to new heights, where predictability…simply doesn't occur as predicted.

On the whole, Premikulu is as forgettable as an 'issued in public interest' Doordarshan film for promoting condom use. Like one of those antithetical ads at primetime, it is sketchy, wryly titillating and makes you want to wash out the taste from your mouth afterwards.

Eminently worth a miss, and if it's the songs you want to watch it for, there are always the cassettes and CDs.
Share. Save. Connect.
Tweet
PREMIKULU SNAPSHOT

ADVERTISEMENT
This page was tagged for
premikulu
Premikulu telugu movie
Premikulu reviews
release date
Kamna Jethmalani, Yuvraj
Follow @fullhyderabad
Follow fullhyd.com on
About Hyderabad
The Hyderabad Community
Improve fullhyd.com
More
Our Other Local Guides
Our other sites
© Copyright 1999-2009 LRR Technologies (Hyderabad), Pvt Ltd. All rights reserved. fullhyd, fullhyderabad, Welcome To The Neighbourhood are trademarks of LRR Technologies (Hyderabad) Pvt Ltd. The textual, graphic, audio and audiovisual material in this site is protected by copyright law. You may not copy, distribute, or use this material except as necessary for your personal, non-commercial use. Any trademarks are the properties of their respective owners. More on Hyderabad, India. Jobs in Hyderabad.