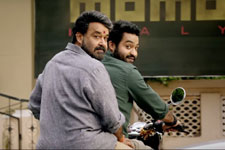 Ravi Kandala / fullhyd.com
EDITOR RATING
5.5
Performances
Script
Music/Soundtrack
Visuals
7.0
4.0
6.0
8.0
Suggestions
Can watch again
No
Good for kids
No
Good for dates
No
Wait for OTT
No
Okay, let's do it again - imagine having a good meal. Great starters, good hot soup and some well-made roti and curries for the main course. Now you think you'll have a small helping of biryani and then round it off with dessert. And the biryani is so spicy that you end up with burnt taste buds. Additionally, the curd in the raitha has soured - you've lost your appetite completely. And then all the same things as then go wrong with the dessert. That is Janatha Garage for you.

The film starts off in a decent manner. Koratala Siva establishes the premise of Janatha Garage - a garage that is run by Satyam (Mohanlal). Satyam helps a poor man who comes to his garage for help, and soon pretty much becomes the saviour for the poor and downtrodden in the area. His brother and sister-in-law are murdered by a rich industrialist as a warning to Satyam. Satyam then sends his brother's son Anand (Jr. NTR) away to Mumbai to grow up in a peaceful environment.

Twenty odd years later, Anand grows up to be a nature lover busy in studying and protecting the environment. He's also in love with his maradalu, Bujji (Samantha). Anand visits Hyderabad on an exchange program and ends up meeting Satyam. Satyam likes Anand's dedication towards his cause and asks him to come and lead Janatha Garage as the cause needs young blood. Anand accepts and becomes a leader. What consequences this leads to forms the remaining movie.

Janatha Garage works well until the interval. Showing NTR as a nature lover is a gamble, but Siva handles it smartly. He infuses some humor, adds a concept fight where NTR talks about showing the power of nature, and has three well-shot songs with NTR showcasing his dancing skills. Mohanlal's track and his enmity with Mukesh Rana (Sachin Khedekar) are shown in parallel, and by the interval things are poised just right.

It is right after that that the movie begins going downhill. The nature lover part is forgotten and the movie gets into regular NTR mode - fight after fight, item song, tragedy, heavy and hammy sentimental scenes, the mandatory comedy and the final fight. The predictability post-interval is so high that even people stepping into cinemas after ages will be able to guess the next scene with unerring accuracy.

Koratala Siva needs a course in finishing his films. He has lofty plot points (never mind if you don't like the execution) and great stars, films songs nicely, and then decides that the only way he can end his film is by having the hero kill all the villains in the aluminum factory set. He clearly writes impressive scenes and plots, and when the movie has run for a good 150 minutes, just finishes it all in a hurry.

Jr. NTR performs like only he can - using his superb voice modulation to full effect, underplaying emotions in a controlled manner and dancing like a dream. Mohanlal brings the required gravitas to his role, but you really wish he was given more to do. The heroines Samantha and Nitya Menon are criminally under-utilised. The movie is filled with about a zillion other actors all of whom barely have any lines.

DSP scores a very different album - more situational songs that gel well enough on screen but will be forgotten soon after. Thiru shoots the movie beautifully, and the colour template and the warm tones suit the film wonderfully. No expense has been spared, either - the film is high on production values.

There is a fight scene in Janatha Garage in the second half where Mohanlal's followers see NTR take over the battle. For every person he beats up, they react and go "Aahhh - beat them up like that". When the director uses reaction shots of his supporting cast to tell the audience what they should feel, all's not well with a movie.
Share. Save. Connect.
Tweet
JANATHA GARAGE SNAPSHOT 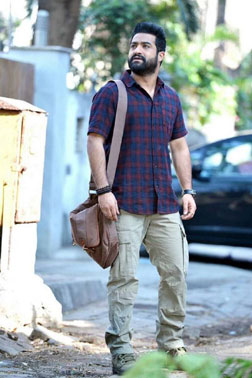 See Janatha Garage full details
JANATHA GARAGE USER REVIEWS
1 - 6 OF 6 COMMENTS
POSITIVE  |  NEGATIVE |  NEWEST  |  OLDEST  |  MOST HELPFUL  |  LEAST HELPFUL
USER RATING
8.0
1 USER
Performances
Script
Music/Soundtrack
Visuals
NA
NA
NA
NA
Can watch again - NA
Good for kids - NA
Good for dates - NA
Wait for OTT - NA
funkycrsipy on 19th Sep 2016, 12:19pm | Permalink
Though I agree with the reviewer on the average and noisy climax, saying that Koratala needs course in climax making is overstatement. It is becoming too judgemental too fast about a person who just made 3 movies and one of which had very decent climax (Mirchi). We are talking about a person who made 100% blockbusters (though I don't agree this movie deserves blockbuster status) and obviously is master filmmaker who doesn't need any courses.
chaitu on 4th Sep 2016, 2:37am | Permalink
This film is a treat for nature lovers!
Dev on 3rd Sep 2016, 2:28am | Permalink
Donno why Ravi seem disappointed with siva🤔.you have good things also in the movie to discuss and give it a thought.surprised with this review ...movie is good ...you cannot judge a movie by few scenes which dint work ..I think siva might have injected more action elements in second off since otherwise no one will like the movie.b y the way your review also very predictable now a days😏
Boom shakalaka on 11th Sep 2016, 11:20am | Permalink
Annayya it's not few scenes

ADVERTISEMENT
This page was tagged for
Janatha garage integrity
Janatha Garage telugu movie
Janatha Garage reviews
release date
Jr. NTR, Samantha
Follow @fullhyderabad
Follow fullhyd.com on
About Hyderabad
The Hyderabad Community
Improve fullhyd.com
More
Our Other Local Guides
Our other sites
© Copyright 1999-2009 LRR Technologies (Hyderabad), Pvt Ltd. All rights reserved. fullhyd, fullhyderabad, Welcome To The Neighbourhood are trademarks of LRR Technologies (Hyderabad) Pvt Ltd. The textual, graphic, audio and audiovisual material in this site is protected by copyright law. You may not copy, distribute, or use this material except as necessary for your personal, non-commercial use. Any trademarks are the properties of their respective owners. More on Hyderabad, India. Jobs in Hyderabad.