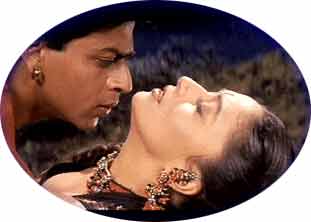 Rachana Gollapudi / fullhyd.com
EDITOR RATING
3.0
Performances
Script
Music/Soundtrack
Visuals
NA
NA
NA
NA
Suggestions
Can watch again
NA
Good for kids
NA
Good for dates
NA
Wait for OTT
NA
Koyla was Rakesh Roshan's follow-up to Karan Arjun, a humongous hit. But a heavy starcast, heavier publicity and costly sets failed to set the cash registers ringing, and Koyla turned out to be a big disappointment for the distributors. Shot in the Singareni Collieries, this film brings to the fore the monopoly of rich landowners in the underdeveloped villages of India. The upper hand of man over woman, purdah, and all the other issues that usually set women's lib organizations afire form the masala of this movie.

There is not much in the story to drool about. Amrish Puri is the villain and owner of coal mines, and Shah Rukh is his dumb (pun unintended!) slave. Madhuri Dixit, a village belle, is tricked into thinking that she's getting married to Shah Rukh, and ends up getting married to Amrish Puri. Shah Rukh, the faithful slave, falls in love with Madhuri and turns against his master. Here starts the saga of reaching the climax. Unfortunately, Rakesh Roshan chose a rather thorny path, and ended up pricking himself. The story meanders, and the audience decreed the film a flop.

The publicity caused great expectations and we were waiting for Madhuri to stoop to conquer, but finally Koyla fell to the depths of the coalmines that it was shot in. The movie is better forgotten in the careers of the stars, though the performances were up to the mark. In the role of a dumb man, Shah Rukh looks okay enough except for his regular over-the-board acting in a few scenes. Madhuri fits into the role, and plays her part with élan... but she alone was never gonna save the movie. But, nevertheless, credit should be given to her for keeping the audience, however small in number, engrossed in the movie.

Amrish Puri essays his role in the same way as he did all his other bad-guy roles. The other actors are insignificant in their small roles. The music is not great, and the locales are bad, too. The movie is a total washout, and makes you kick yourself for spoiling your time. So watch it or leave it, you won't miss a thing.
Share. Save. Connect.
Tweet
KOYLA SNAPSHOT

ADVERTISEMENT
This page was tagged for
Koyla
KOYLA
Koyla picture setting Hyderabad
Koyla hindi movie
Koyla reviews
Follow @fullhyderabad
Follow fullhyd.com on
About Hyderabad
The Hyderabad Community
Improve fullhyd.com
More
Our Other Local Guides
Our other sites
© Copyright 1999-2009 LRR Technologies (Hyderabad), Pvt Ltd. All rights reserved. fullhyd, fullhyderabad, Welcome To The Neighbourhood are trademarks of LRR Technologies (Hyderabad) Pvt Ltd. The textual, graphic, audio and audiovisual material in this site is protected by copyright law. You may not copy, distribute, or use this material except as necessary for your personal, non-commercial use. Any trademarks are the properties of their respective owners. More on Hyderabad, India. Jobs in Hyderabad.