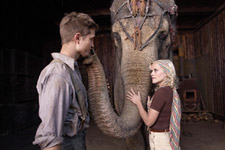 Nupur Barua / fullhyd.com
EDITOR RATING
6.0
Performances
Script
Music/Soundtrack
Visuals
6.0
6.0
6.0
7.0
Suggestions
Can watch again
Yes
Good for kids
Yes
Good for dates
Yes
Wait for OTT
Yes
The circus was once the most popular performance art form. With the advent of moving and talking pictures, radio, video, and, more recently, the Internet, the circus has become less attractive. Ironically, it now takes a movie to showcase how spectacular a travelling group of equestrians, acrobats, comedians and animals once was.

Based on the book by Sara Gruen, Water For Elephants is about Jacob Jankowski (Robert Pattinson), a young man who loses a chance to become a veterinarian when his parents die in an accident. Set in the USA in 1931, a time when the country had not yet recovered from the Great Depression, the movie follows Jacobâ€™s journey from here. Since his house is mortgaged to the bank, the young almost-vet decides to move to the city in search of a job. He never gets there.

Jacob jumps into one of the cars of a passing train, and becomes a stowaway in the Benzini Brothers Circus, to whom the train belongs. He gets food and shelter for a few chores around the place, including cleaning the manure and keeping unwanted freeloaders out. The proprietor and ringmaster of the dying company, August Rosenbluth (Christopher Waltz), promotes him to the status of a circus vet, after Jacob diagnoses Silver (Ice), the star performing horse, with laminitis.

Jacob has to share his living quarters with Kinko (Mark Povinelli) and his Jack Russell terrier Queenie (Uggie). They become reluctant friends, and Jacob has a mentor in Camel (Jim Norton), the elderly man who introduced him to August. Jacob is very taken in by Marlena (Reese Witherspoon), who is a star performer for the company, and also Augustâ€™s wife.

With Silver dead, August decides that the circus needs a new act, and acquires a 53-year-old elephant named Rosie (Tai). The big, gentle pachyderm becomes Jacobâ€™s responsibility. Marlena and Jacob bond over their mutual affection for the elephant, and their repugnance towards Augustâ€™s need to train the unwilling Rosie with a bull-hook. However, once Jacob has cracked the secret to schooling Rosie, happy days follow and the Benzini Brothers Circus becomes one of the best in the country.

Narrated in flashback by an older Jacob (Hal Holbrook) to Charlie (Paul Schneider), a circus proprietor in present times, the story of the ill-fated Benzini Brothers Circus has a variety of themes - from love triangles and obsessions to morality. References to actual events include Prohibition and the Great Depression.

The audience may cringe at the treatment handed out to animals (usually beaten into submission, and mostly starved) and lesser human beings (worthless employees are redlighted, i.e., pushed off the moving train, when they are no longer required), but one has to remember that this was an era when survival was more important than humanity.

Fans of the books may be slightly disappointed in the lack of spectacular visuals, but Francis Lawrence and screenplay writer Richard LaGravenese manage to bring to life a period in American history that tested the best of men. They could have delved a little deeper into Augustâ€™s schizophrenic behavior, instead of justifying his mood swings.

The other disappointment is the lead pair. Pattinson and Witherspoon have no chemistry on screen, and their lovemaking scenes lack passion. This may have something to do with the fact that Pattinson played Witherspoonâ€™s son in Vanity Fair. Individually, their performances are commendable, and the young Pattinson looks ready for a life away from vampirism. Waltz is definitely the best actor of the lot, and his portrayal of an insecure husband and proprietor is near-perfect. The jewel in the menagerie is Tai, whose pachyderm frame fills the entire screen.

As far as adaptations go, Water For Elephants remains largely true to the historical novel. A few characters are done away with, and Jacobâ€™s character in the movie seems more intense than is necessary. A good watch, albeit lengthy.
Share. Save. Connect.
Tweet
WATER FOR ELEPHANTS SNAPSHOT

ADVERTISEMENT
This page was tagged for
Water For Elephants english movie
Water For Elephants reviews
release date
Reese Witherspoon, Robert Pattinson
theatres list
Follow @fullhyderabad
Follow fullhyd.com on
About Hyderabad
The Hyderabad Community
Improve fullhyd.com
More
Our Other Local Guides
Our other sites
© Copyright 1999-2009 LRR Technologies (Hyderabad), Pvt Ltd. All rights reserved. fullhyd, fullhyderabad, Welcome To The Neighbourhood are trademarks of LRR Technologies (Hyderabad) Pvt Ltd. The textual, graphic, audio and audiovisual material in this site is protected by copyright law. You may not copy, distribute, or use this material except as necessary for your personal, non-commercial use. Any trademarks are the properties of their respective owners. More on Hyderabad, India. Jobs in Hyderabad.