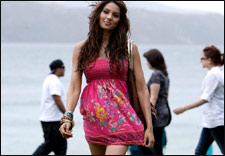 Nupur Barua / fullhyd.com
EDITOR RATING
5.0
Performances
Script
Music/Soundtrack
Visuals
5.0
4.0
3.0
7.0
Suggestions
Can watch again
No
Good for kids
No
Good for dates
No
Wait for OTT
Yes
The men in white, Abbas and Mustan, have plagiarised every Hollywood action flick that has caught their fancy, and passed them off as original works of art. Most of them have even become hits. So the fact that they decided to produce and direct the "official Indian remake" of The Italian Job came as a surprise to many.

The players are explosive-expert Bilal (Sikander Kher); prosthetic specialist Sunny (Omi Vaidya); master illusionist Ronnie (Bobby Deol); and Charlie's ladylove, the automobile whiz and professional seductress Riya (Bipasha Basu); and of, course, Charlie himself, who is the planner and leader.

Apparently, during the Great War, Romania had handed over her billions, in gold, to Russia for safekeeping. After nearly a century of denial, Russia finally admits to possessing the treasure, and, in a gesture of goodwill, offers to return it. Our Indian professionals decide to rob that train, simple.

What this requires is the involvement of the world's best hacker, code-named Spider (Neil Nitin Mukesh), who has been untraceable so far. Naina (Sonam Kapoor), who has a degree in ethical hacking, enters the picture, too.

In true Burmawalla Brothers style, a simple story is made complicated with the logic-defying sub-plots and inane dialogues. To begin with, criminal and illegal activities are glorified and justified by giving the characters hearts of gold. For example, Victor wants to build a massive orphanage with his share of the money, so that no kid turns out like himself, or like Charlie, for that matter (who has been stealing since the age of 7).

None of the players pauses to consider the fact that stealing the gold may have moral consequences - after all, as one character puts it, the gold does not belong to Russia, and Romania has anyway lived without it for 95 years - and it makes perfect sense for this motley crew of Indians to just pinch it.

Abhishek Bachchan is wooden throughout the movie. At no point does he behave like or resemble a mastermind leader of a criminal group. Everybody else seems to be doing all the hard work. The stiff dance moves do not help.

But speaking of dancing, Bachchan Jr. has more rhythm than his leading ladies. The anorexic Sonam Kapoor in revealing clothes and Gothic make-up cannot dance, period. The less said about her insipid role, the better. She is too "Aisha" to be an intellectual hacker.

As for Bipasha Basu, her toned body makes up for her lack of other abilities. However, she is the only one in the entire movie who is sincere in her effort, portraying a woman who can charm the pants off any male (hot-blooded or otherwise), including the "7th richest man in South Africa". She looks pained all the time, though.

In fact, the pained look is overdone with Vinod Khanna's character. He is supposed to be the grand master of the robbery (and that is emphasised a bit), but all he does is recruit the team, and after that, his role is irrelevant.

Omi Vaidya does what the directors ask him to do, but the way he is portrayed on screen is now getting slightly repetitive. Johnny Lever has a double role, the second of which is based in New Zealand, where he has a Kiwi wife, Kiwi kids and a Kiwi Ramu Kaka. He contributes, to the movie, more than Bobby Deol does. In fact, Deol's illusionary achievements are plain silly.

In yet another twist, Sikander Kher is paired with Omi Vaidya for comic relief (imagine!). He plays a man hard of hearing, thanks to his tryst with explosives, and is therefore expressionless most of the time.

Besides Bipasha, the only actor who takes his role seriously is Neil Nitin Mukesh. Lisping through his dialogues, he nevertheless makes a mark, but is mostly unintentionally funny with his Hollywood-inspired expressions and body language.

There is plenty of action, yes. The train sequence has its moments, but is spoiled by constant commentary by Bipasha's character, and some confusion (in the minds of the audience) about how all that gold was transferred within 3 minutes by just one person.

However, the Mini sequence in the original movie, still fresh in the minds of most film buffs, is replayed rather pathetically in Players. And the climax is almost juvenile for a thriller.

What makes the movie worth watching is the cinematography. Shot in Amsterdam, Russia, Goa and New Zealand, Players is by far the best-looking movie by Abbas-Mustan. While costume design is average (and the music videos do not help - the music is below average), the production design is a winner.

If you can accept that Abhishek Bachchan can modulate his voice to resemble that of a Russian General, and that a bunch of not-so-bright people can pull off an international heist and not be traced or followed by the Interpol to New Zealand, Players may be a welcome distraction from the equally illogical teamwork exhibited by our cricket players in Australia this weekend.
Share. Save. Connect.
Tweet
PLAYERS SNAPSHOT

ADVERTISEMENT
This page was tagged for
Players hindi movie
Players reviews
release date
Abhishek Bachchan, Sonam Kapoor
theatres list
Follow @fullhyderabad
Follow fullhyd.com on
About Hyderabad
The Hyderabad Community
Improve fullhyd.com
More
Our Other Local Guides
Our other sites
© Copyright 1999-2009 LRR Technologies (Hyderabad), Pvt Ltd. All rights reserved. fullhyd, fullhyderabad, Welcome To The Neighbourhood are trademarks of LRR Technologies (Hyderabad) Pvt Ltd. The textual, graphic, audio and audiovisual material in this site is protected by copyright law. You may not copy, distribute, or use this material except as necessary for your personal, non-commercial use. Any trademarks are the properties of their respective owners. More on Hyderabad, India. Jobs in Hyderabad.