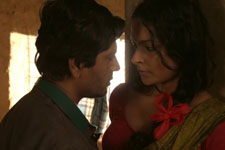 T J Reddy / fullhyd.com
EDITOR RATING
4.5
Performances
Script
Music/Soundtrack
Visuals
8.0
4.0
6.0
8.0
Suggestions
Can watch again
No
Good for kids
No
Good for dates
No
Wait for OTT
Yes
You know what warms my heart in the most non-cynical way possible? I'll tell you. The fact that I saw studios titled Movies By The Mob and Pulp Fiction Entertainment on the opening credits of this film. Yes, one of those names is not as creative as the other, but what is laid bare for all to see is that the men and women who created these production houses are, in some shape or form, part of a new generation of filmmakers who have been inspired by content outside the norm, and aspire to be a band apart from said norm while rendering their art.

The evidence of skill this new wave of artists leave behind is striking. For every Prem Ratan Dhan Payo, we have a Raman Raghav 2.0. For every Kaabil, we have a Badlapur and for every Dilwale we have a Lipstick Under My Burkha. While not every one of the newwave films is a slam dunk, one can rest assured that the content being presented veers away from the status quo, and this is where Babumoshai Bandookbaaz slides into the theatres and the society's collective consciousness (owing to its risqué trailer).

The film is set in the dusty underbelly of Uttar Pradesh, and the audience are employed to watch the life of Babu (Nawazuddin Siddiqui) as a feared and legendary hitman, from close quarters. When his loyalty to his long-term employer is overlooked, Babu accepts an assignment which enlists him to eliminate a member of his former employer's entourage. After he issues fair warning and commences his plans, Babu's work is interrupted by an adversary; a younger hitman who has modelled his life and style after Babu. Ekalavya much?

With this trigger-happy environment surrounding him, a pallu-dropping sultry wife by his side and rampant criminal misdemeanours lacing the air they breathe, Babu and his pseudo-protégé lay themselves a competition to determine the better hitman between the two, with the loser having to retire. This is a film I'd pay my hard-earned time and money to watch, and truth be told, this is the film you get for the first hour. But soon after it hits the 60-minute mark, the film finds solace in being a paint-by-the-numbers, forgettable revenge drama.

One needs to be in his (and most definitely not a her) mid to late teens to truly appreciate the film. Not to say that a "warm-blooded" woman wouldn't appreciate it, but what do I know - maybe it is a film for the young her as much as it is for the young him.

I use the "young" specifically because the juvenile jokes, the male gaze permeating the film portraying women as more slutty than sultry, the boisterously over-the-top line readings and the free flow of bullets with no regard for life are things a younger version of me would have admired to a giddying degree while considering this film the edgy work of pure art that my parents would never let me take a peek at. But alas, I am a crotchety old man in his mid-20s now, and those aforementioned "entertaining attributes" don't cut it for me unless a film has its fair share of originality, intelligence and heart.

This one has all the flashy technical characteristics the snobby film-nerd in me aches to see in every outing, except for an engaging story. Let's begin by praising the stellar cast whose work is undone solely by the film's insistence on being safe. I'm currently on the hunt for new superlatives to describe Nawazuddin Siddiqui with, and I'll report back with my findings. Badita Bag, Jatin Goswani, Divya Dutta and the rest of the supporting cast essay out their characters (no matter how one-note) with such aplomb that you can see them as an extension of the vivid cast that inhabited Gangs Of Wasseypur.

Two prongs make their performances pop out of the screen, one being their acting talent and the second the excellent camerawork put forth by DOP Vishal Vittal. The film has an inbuilt lived-in feel about its locales with none of the dust, grime and sleaze being glossed over. This helps in making the characters feel like a product of their surroundings more than a few actors being plopped into sets. When each of these characters and their actions is complemented by some aptly incongruous bits of music, the distinct energy the film carries with it is very welcome.

And sure enough, therein lurks the massive shortcoming of the film. Through all its uber-macho characters, femme fatales and homages to better films, it forgets to keep itself unique. The folk who choose to watch this film are privy to the movies this one is aping, and (I'm going to make a correlation-causation judgement) will be quickly aware of its derivativeness and unoriginality.

The characters are loud but light, the scenes are spent instead of steamy, and the longer I watched this film, the more alarming the realisation that the filmmakers spent all their intelligence on the conceit and not on the screenplay. That is not to say there is not an audience for this film - I told you who they are earlier. They were in my cinema hall howling with excitement at every curse word and cleavage shot; but we already know where to find them outside the theatre. A movie is supposed to tell us great stories with these "salacious" elements infused in it - unfortunately Babumoshai Bandookbaaz is just below bang average.
Share. Save. Connect.
Tweet
BABUMOSHAI BANDOOKBAAZ SNAPSHOT 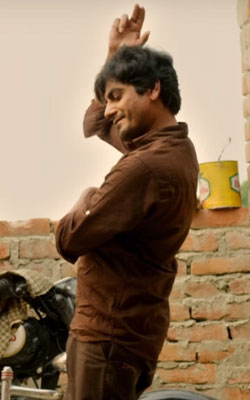 ADVERTISEMENT
This page was tagged for
the babumoshai bandookbaaz movie
bandookbaaz full movie
Babumoshai Bandookbaaz hindi movie
Babumoshai Bandookbaaz reviews
release date
Follow @fullhyderabad
Follow fullhyd.com on
About Hyderabad
The Hyderabad Community
Improve fullhyd.com
More
Our Other Local Guides
Our other sites
© Copyright 1999-2009 LRR Technologies (Hyderabad), Pvt Ltd. All rights reserved. fullhyd, fullhyderabad, Welcome To The Neighbourhood are trademarks of LRR Technologies (Hyderabad) Pvt Ltd. The textual, graphic, audio and audiovisual material in this site is protected by copyright law. You may not copy, distribute, or use this material except as necessary for your personal, non-commercial use. Any trademarks are the properties of their respective owners. More on Hyderabad, India. Jobs in Hyderabad.